Well, we are terrible bloggers!  The last you heard from us, we were on the road.  Gosh, that could have people wondering if we made it home.  Yes, we did.  We have been home for probably a month.

One of the things that we did on the way home was visit Laura Ingalls Wilder's home in Mansfield, MO.  Mom had never read the Little House books but she watched the TV show.  She started reading the books before we arrived at her home and finished all of them shortly after we returned home.  She found the books interesting because it gave her a really good insight on how people really lived during that time.  There are two homes to tour as well as a museum.  The house tours did not go as planned as the tour guide refused to give the tour as scheduled because she needed a break after having school kids come through. The ticket agent had told her and another couple that the tour would take place after the school kids, but the guide rudely said no.  It really threw off our schedule and Mom had to rush through the museum.  She was not happy.  We had a long drive ahead of us and she was stressed. Tickets are $18 a person.  She debated going because it seemed pricey and then having a rude tour guide did not help. She would love to go back and tour the musuem again especially after she read the books and many of the items mentioned in the books are there, but she doubts she will. 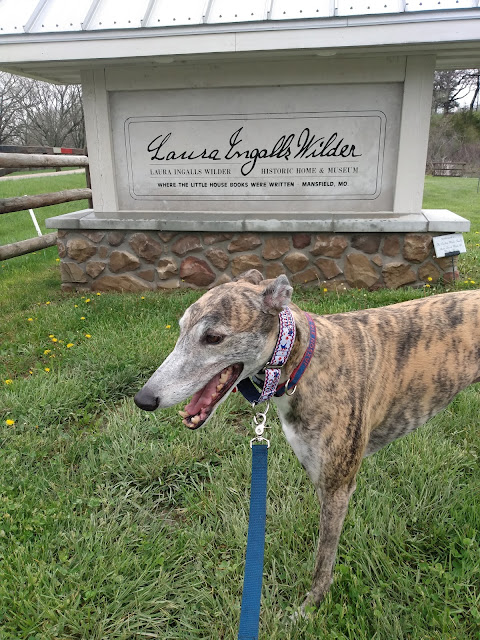 On our way home, we stopped at Bennett Springs so that Dad and Grandpa could go trout fishing.  Grandpa didn't travel with us, but he came with us to Bennett Springs. 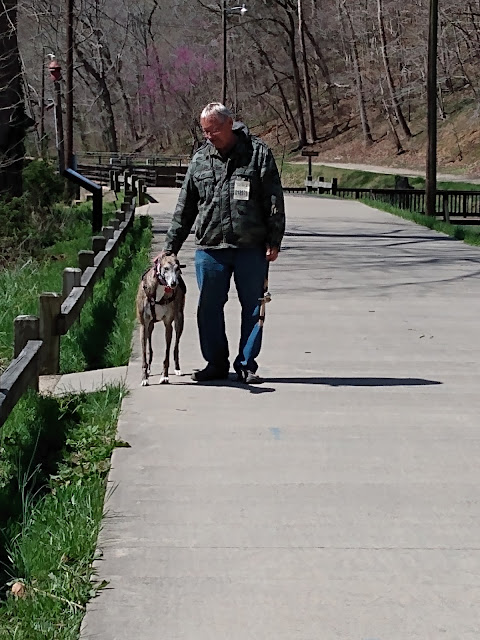 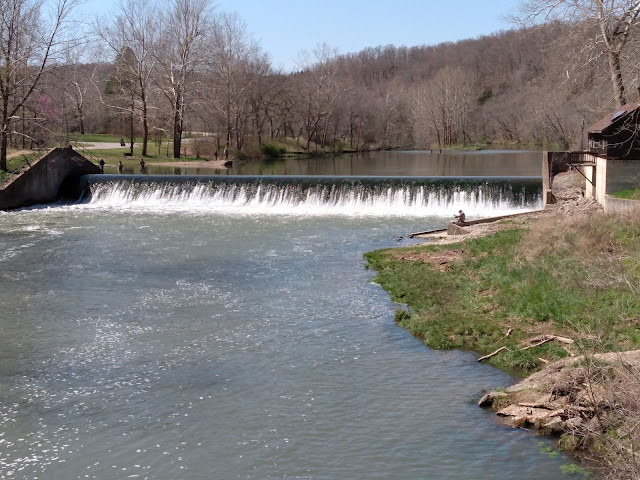 I celebrated my fifth birthday on May 12th! 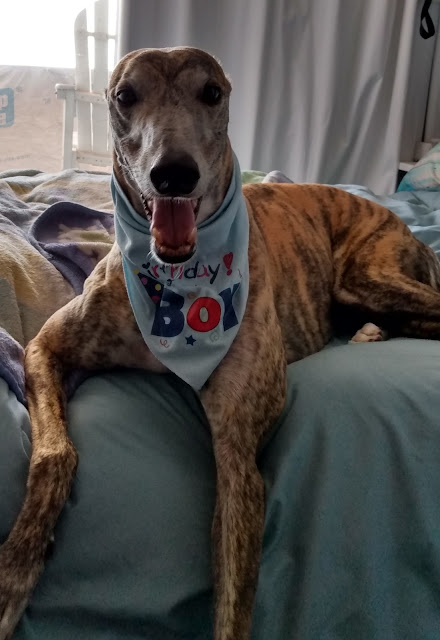 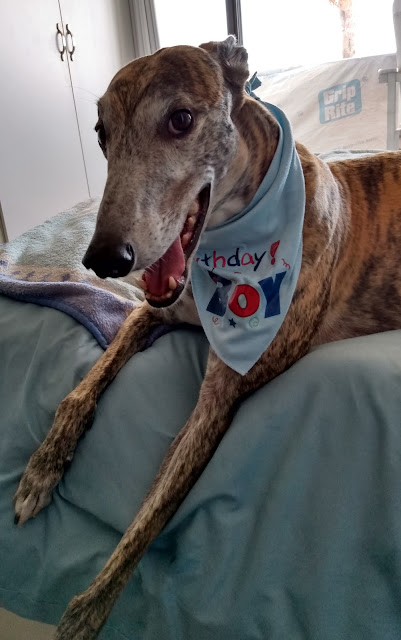 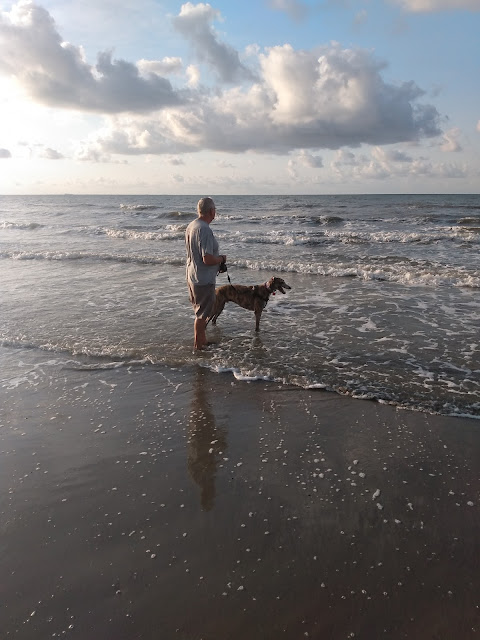 My folks are celebrating their 36th wedding anniversary today.  Mom made a banana split cake for dessert.  They ate at Soul 2 Soul yesterday. They had fried ribs.  Mom says it was delicious.  I wouldn't know. 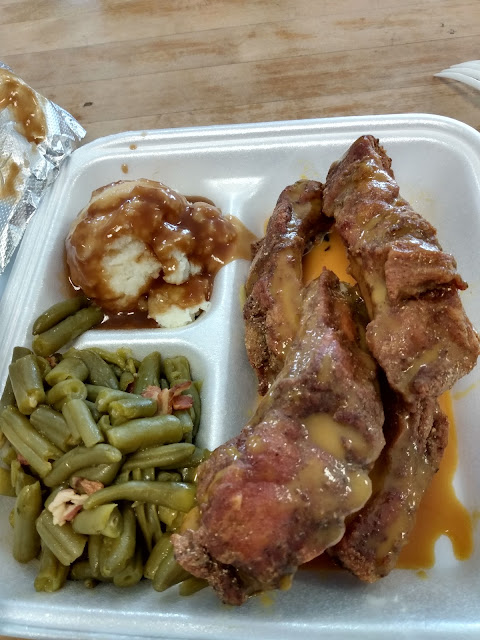 Tomorrow is my 3rd Gotcha Day!  Mom said she is going to take me to Petsmart.  I haven't been there in two years!

That is a quick update to let everyone we are still alive and doing well.

The Greyhound Who Is Now Five

Still On The Road

This trip isn't really exciting, so we haven't posted any updates.

We spent the first night at a Camping World in Tulsa.  We didn't get there until after 7 p.m.  We didn't have electric hook ups, but we were able to watch TV because we have a battery that can run our lights and TV. The next day we headed towards Grandma's house.  We stopped in Lebanon, MO at the Russell Stover Outlet and guess what?  It is closed for good.  Mom was really sad.  The folks decided to stop at a Stuckey's to pick up a pecan roll to take to Grandma's.  It wasn't as good as they remembered.

We arrived at Grandma's on Friday afternoon.  The next day we drove to my Dad's sister's house.  We had a small family reunion.  Dad's nephew is in the Navy and he and his new wife were in town.  Also, another nephew was in town from Florida.  They hadn't seen the Navy guy since he entered the military four years ago.

On Sunday, we headed to Hawn State Park which is in Ste. Genevieve, MO. Mom's great grandparents settled in that area when they came to America from Germany.  She had been wanting to find her great grandparents graves and she succeeded.  They were really hard to read but Mom had been given directions from a cousin on where they should be and he was correct.

Hawn State Park is nice but there is no cell service or TV reception.  It was a very quiet time. 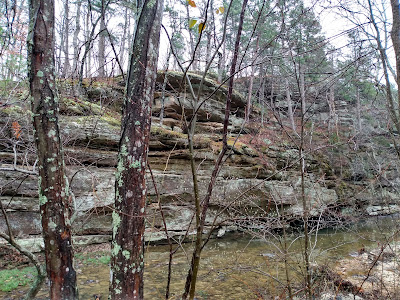 We spent two days at Hawn and then we went back to Grandma's house. We have been here since.  We have done a lot of eating.  We have seen almost all of Dad's family.  We leave tomorrow and we are headed to Bennett Springs to do some trout fishing. 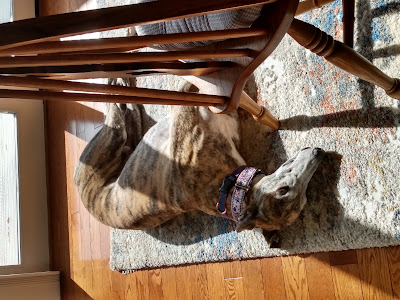 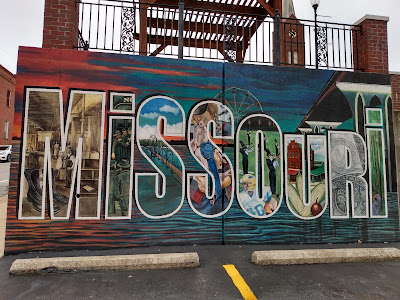 The weather has been rainy and colder than home.  It is steamy at home, so we are not complaining too much.

The Greyhound Who Is Enjoyig His Trip

I know, it has been a while.  Mom seems to forget to post anything unless we are traveling.  Well, we are on the road again.  This time, we are headed to see family.  We will be staying at Grandma's for about a week..  I love staying there! We just left this morning and it is a two day trip, so we will be there tomorrow evening.

We were supposed to go to Gulf Shores, AL in February for Mom's birthday, but I got hurt.  It wasn't a serious injury but the folks thought it was best not to travel with me.  It is rather embarrassing to talk about my injury.  You see, I fell off my folks bed and when I tried to stop myself and climb back up, I scraped my leg on this board on the side of the bed.  I ended up going to the vet. It was $155. 😒 He couldn't stitch it because greyhounds have very thin skin and he said it would just tear more.  My wound was the size of a quarter but it bleed every time I walked.  I wore a bandage that the vet put on me for 48 hours as required.  Boy, did I scream when he put it on my leg.  I don't like anything on my legs.  It took three weeks for it to heal which is better than the last time when it took two months.  The folks have baby proofed that board, so I shouldn't get hurt on it again.

I am still busy carrying packages for Mom. I think it is fun and people laugh when they see me.

Oh, the other big thing going on is my corns.  I have corns on three feet.  I have some feet with two corns and one has three.  It is driving Mom crazy.  She is trying all sorts of things to remove them.  I don't like wearing boots, so don't even tell her to do that.  Joey had one corn and she thought that was terrible, so imagine how she feels with a dog with six corns.  Joey wore a boot.  I think we are making some progress but it will be a life long problem for me. 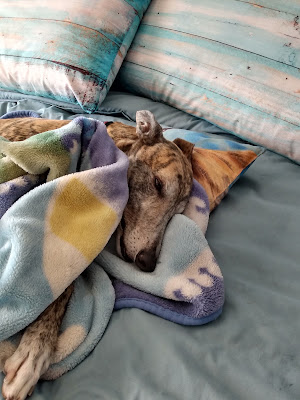 It is almost time to stop for lunch at a rest area, so I will end now.  Talk to you soon!

The Greyhound Who Travels In A van

That's right, I am Mr. December in the Celebrating Greyhounds 2022 Calendar.  All of the folks' greyhounds have been in the calendar but I am the first to have a big picture.  Scout and I were both in the desktop version which is a nice size photo but Jack and Joey only had small pictures in the wall calendar.  This has been Mom's goal for something like 12 years.  She was really surprised when she received the calendar because she thought once again that my picture would be small.  So, Mom can cross this off her bucket list. 😀

We haven't been doing much because Omicron is really bad here.  Our numbers are much worst than Delta ever was and we thought that was bad.  We did go camping over New Year's.  That is actually safer for us than staying home.  We live in a high rise, so we run into a lot of people.  We went camping to avoid the loud fireworks that occur on the beach.  The temperatures were in the 80's, so it was nice but warm. We went on a few hikes and ate hamburgers and steak.  It was fun.

Dad wants to take a longer trip next month.  Time will tell on that one.

The Greyhound Who Is A Big Deal To His Mom 😁

The New Recliners Have Arrived!

Mom has been stalking the delivery of our two recliners for the past week.  They both shipped from North Carolina on the same day but when they made a stop over in Georgia, only one went on to Texas.  A few days later the second chair left Georgia and made its way to Texas. Mom was a little nervous but she was happy when they both ended up at the Houston facility.

Mom had planned on donating our old chairs to a thrift store here that also does pick up of items.  Unfortuntely, they were not able to pick up the old chairs this week.  She checked around but all the places that pick up items for a fee were too expensive.  She did not want to pay $375 for the pick up of the chairs, so she went to Plan C which was for her and Dad to take the chairs to Goodwill.

Yesterday, Dad decided that they should go ahead and try to get the chairs out of the unit since rain was predicted for today.  He was concerned that they might have trouble getting the chairs out in one piece.  Recliners easily come apart but ours had slip covers over them and Dad had them tied on good and he really didn't want to have to remove the covers and take the chairs apart.  In the end, the folks were able to get the chairs out our door without too much trouble.  They then put the first chair on the back of the van and took it to Goodwill. They made two trips to Goodwill and the twin chairs confused the workers but it all worked out and was much easier than Mom expected.

This morning, Mom washed our rugs. We have Ruggables which are nice because they can be washed in a regular washing machine. She then used a steam mop to clean our floors.  She was really busy and sweaty.

Our chairs arrived around 10 a.m.  Mom really likes the color of the chairs.  They are a little stiff right now, but she said they will be better in a few days.  She is working on breaking hers in right now. She is tired from moving chairs and cleaning.

Mom is very happy with how easy it was to get the new chairs from Amazon.  She chose a delivery time when she placed her order and it never changed.  It was a good experience.
Jaxson,
The Greyhound Who Is Tired After All The Activity With Chairs

Well, we are terrible bloggers!  The last you heard from us, we were on the road.  Gosh, that could have people wondering if we made it hom...