We Are Not Camping Labor Day Weekend Because...

... We just spent the past four days camping at Sam A Baker State Park.

We both wanted to tell you about our trip, so we are going to do this blog post together.

Jack: We had a lot of fun camping this past weekend. We did a lot of walking.

Jack: I got my ankles wet.

Scout: Yeah, Jack is scared to get his belly wet. He only gets his feet wet. I lay down in the water.

Jack: I have had a bad experience in the water. Don't you remember the time that Mama convinced me it was safe to get in the water and then I fell in a hole and almost went under water?

Jack: Anyway.... I had a great time relaxing outside with Mama and Daddy. Scout stayed inside. She likes the air conditioning. She thinks she's a princess.

Scout: I am a princess. What's the point of laying out in the heat when you can lay on a bed with the air conditioning running? I like comfort.

Jack: It was cold when we woke up Saturday morning. Mama covered us up with a blanket and we waited for our breakfast. Mama makes us really good breakfasts when we camp. 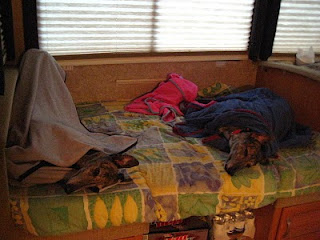 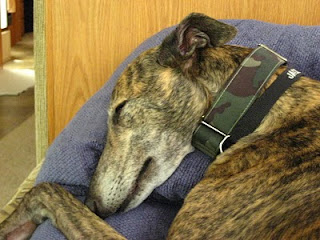 Jack: Mama thought it was funny to see Scout's legs sticking up. 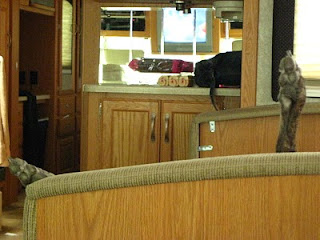 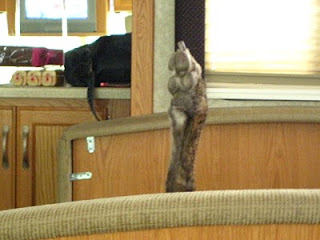 Jack: Mama and Daddy ate at the campground restaurant twice and Mama brought us back a piece of her steak the second night. She forgot the first night.

Scout: Daddy said she cleaned her plate and then she remembered us. I can't believe she forgot us.

Jack: I couldn't believe it either. We made her feel guilty though and she remembered us the next night.

Mama said there were hummingbird feeders at the restaurant windows. Here are a few photos from their table. 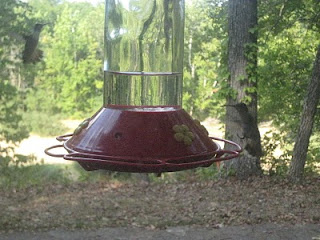 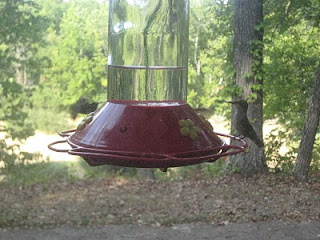 Jack: The last night we were the only camper in our section of the park. It was strange. 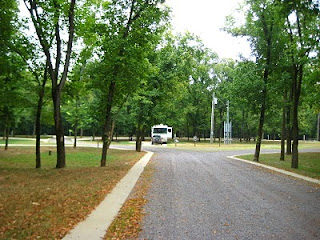 Jack: We were able to walk anywhere we wanted because there wasn't anyone around. Scout however decided she had enough walking and stayed behind. Daddy said she had to go, but then Mama said it would be like pulling a mule. They had to pull her around like a mule Saturday night because she was tired and didn't want to walk.

Scout: Yep, I make a good mule. I like to walk when it's cool not hot, bug-free and when I'm not tired. What's wrong with that?

Jack: You are so spoiled, Scout! I, on the other hand, love walking and spending time outside. I'm a happy guy and think camping is so much fun. I can't wait to go again. Our next trip is for an entire week.

Jack: It will be fun! The weather will be cool and you will like it.

Scout: It will be exhausting. 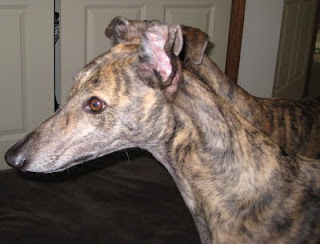 (Hearing rooing on the computer.)

We had a roo fest this morning! Daddy doesn't like us to make a sound, but sometimes when Daddy is away, Mama lets us watch rooing greyhounds on YouTube. We only have to hear one rooing note and we take off on our own. Mama says that even a hound has to let loose sometimes.

Mama loves this song. It's the Greyhound Song.

Rooing is exhausting. We are ready to sleep the day away now.

Jack and Scout
The Rooing Greyhounds
at August 26, 2010 8 comments: 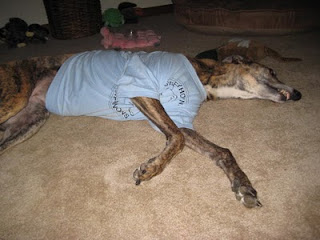 Mama was a nervous wreck last night because we had a tornado warning. The warning was around for at least an hour and a half. It seemed like the storm was never going to get here. It finally arrived and we only had thunder and lightning. There was no rain. Mama had us all prepared to go into the basement. She got aggravated with Daddy because he wanted to go to bed and she couldn't imagine how he could go to sleep when a tornado was coming. Daddy even wanted me and Scout to go outside and we just looked at him. Seriously, he wanted us to go outside during a big lightning storm. It's a good thing we have Mama here. Later, we had another round of storms, but no damage. We got a lot of rain with those storms.

I no longer need my storm buster shirt. That's right, I am now a brave boy without it! I get a little nervous when it storms, but I don't freak out anymore. I just hang out on the big bed or my own bed and wait out the storms. Mama is very proud of me.

Jack
The Greyhound Who Survived The Tornado Warning

We were surprised to have visitors at our bird feeder the other night. The pictures are not very good because Mama had to take them from inside the house. Aren't they cute? 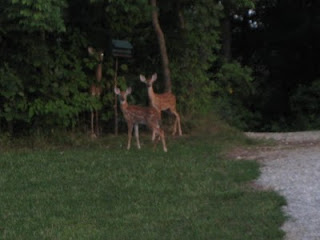 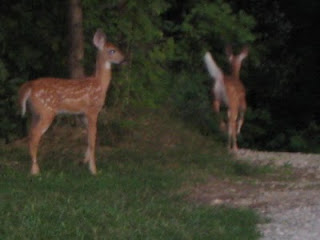 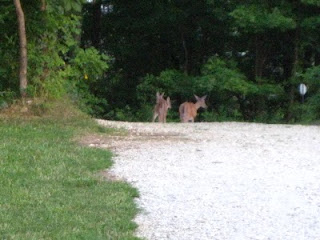 We had a opossum on our front porch the other evening, but Mama did not take his picture. Mama says opossums are the ugliest creatures on earth.

Mama had a lizard crawl across her shoe yesterday, but again no photos as she was screaming and jumping up and down. She's not really scared of them, but she was startled when it ran over her foot.

We have a fox that runs across our yard from time to time but no photos of him. He's pretty fast.

Raccoons are cute, but they are driving Mama crazy. She is always trying to scare them away from the bird feeder. They love the hummingbird food, so it's a constant battle. Mama usually brings the feeder in at night, but now they are showing up in the morning while she's in the shower and emptying the feeder.

We are hope our new house is raccoon, opossum and snake-free.

Jack
The Greyhound Who Lives With Wild Critters
at August 13, 2010 7 comments:

The weekend before last, we went camping. We camped at a small park in Missouri called Hawn State Park. It's one of our favorites. It has really nice trails. There is a nice creek that runs behind some of the campsites. Scout loves to lay in the creek. I got my feet wet this time, but I do not lay in water.

Here are a few photos. This is behind the campsites and the creek runs along these rocks. The photos of us in the creek did not turn out. 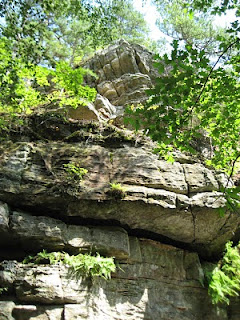 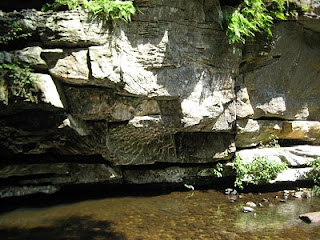 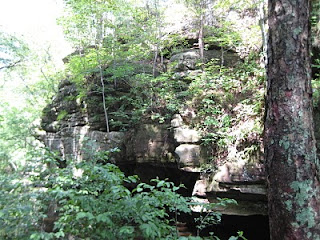 All of the photos of us camping look about the same. 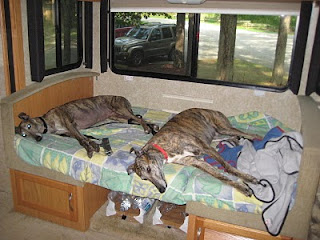 We had one day where it rained off and on. The rain was not bad, but the thunder shook our RV. We didn't like that.

Thanks for stopping by today!

We are back to being able to use the Internet! It was really rough in the beginning, but we found other things to do besides surfing the net. We played hide and seek with Mama almost every night. Scout is really good at that game. I prefer laying in the sun. ( I was going to post a photo of me in the sun, but it looks like Blogger has changed things since we've been away. We will have to figure this out. Our option to add photos is gone. Mama and I are working on it, but can't figure it out.)

This morning, Mama did our nails, used wipes to clean us and brushed our teeth. We knew something exciting was in store for us. Daddy said he had to go to the doctor, so we went there. We walked around while he was inside. We then went to McDonald's and got breakfast and had it waiting for him. After he was done with his doctor, he drove us to the vet. Yikes! I didn't want to go in even though Mama said we were there for Scout. It was time for her yearly check-up. Scout was excited to see everyone. She jumped on the scale and found out she gained 3 pounds since last year. Her diet needs some serious work. Our regular vet is in Hawaii for a month, so we had a substitute. He gave Scout a shot and looked at her eyes, ears and teeth. He then looked at my teeth. WHAT THE HECK? I'M WAS JUST THERE FOR MORAL SUPPORT! I wasn't happy about that. Mama and I have been working really hard at getting my teeth in shape and I'm really tired of people looking at my teeth. After that, Scout laid on the floor and everyone thought she was so cute and sweet. They drew blood for a test and she didn't care. She just laid there. Finally, it was time to leave and I couldn't get out of there fast enough. Daddy loaded us up in the Jeep while Mama paid the vet. We then came home and have been relaxing after our busy morning. It's good to be home.