Joey,
The Greyhound Who Knows How To Get His Way

Not Much To Say

There is not much going on here.  Sunday, we had a beautiful day.  We sat outside and watched Mama knit a sock.  BOL!  Today, we are waiting for the ice storm to arrive.  We had one on Friday, but this one was billed to be bigger. Schools are closed and some businesses. It is not living up to the predictions though and we may escape it without much happening.  It looks like we will get above freezing this afternoon and that was not predicted. We thought we would be without water all day, but the temperatures have stayed warm enough that they haven't turned it off.  It will most likely be turned off tonight though.  It will be the fifth time.  Today, we are just snuggled up in our blankets and having a "snow day" as Mama calls it.

Oh, there is something big happening tomorrow night. The fun police will be back in town.  Yep, that is right, Dad is coming home and it looks like we will be together for the rest of the year!  We are leaving here later this week and heading to our next destination.  We were supposed to head to California after Christmas but those plans were canceled.  We were quite disappointed. Mama kept us busy though and we did fine.

Joey,
The Greyhound Who Didn't Know Houston Could Get Icy
at January 28, 2014 6 comments:

Our bed took a trip without us.  It took a bath. It came back fluffy, but no longer smells like us. 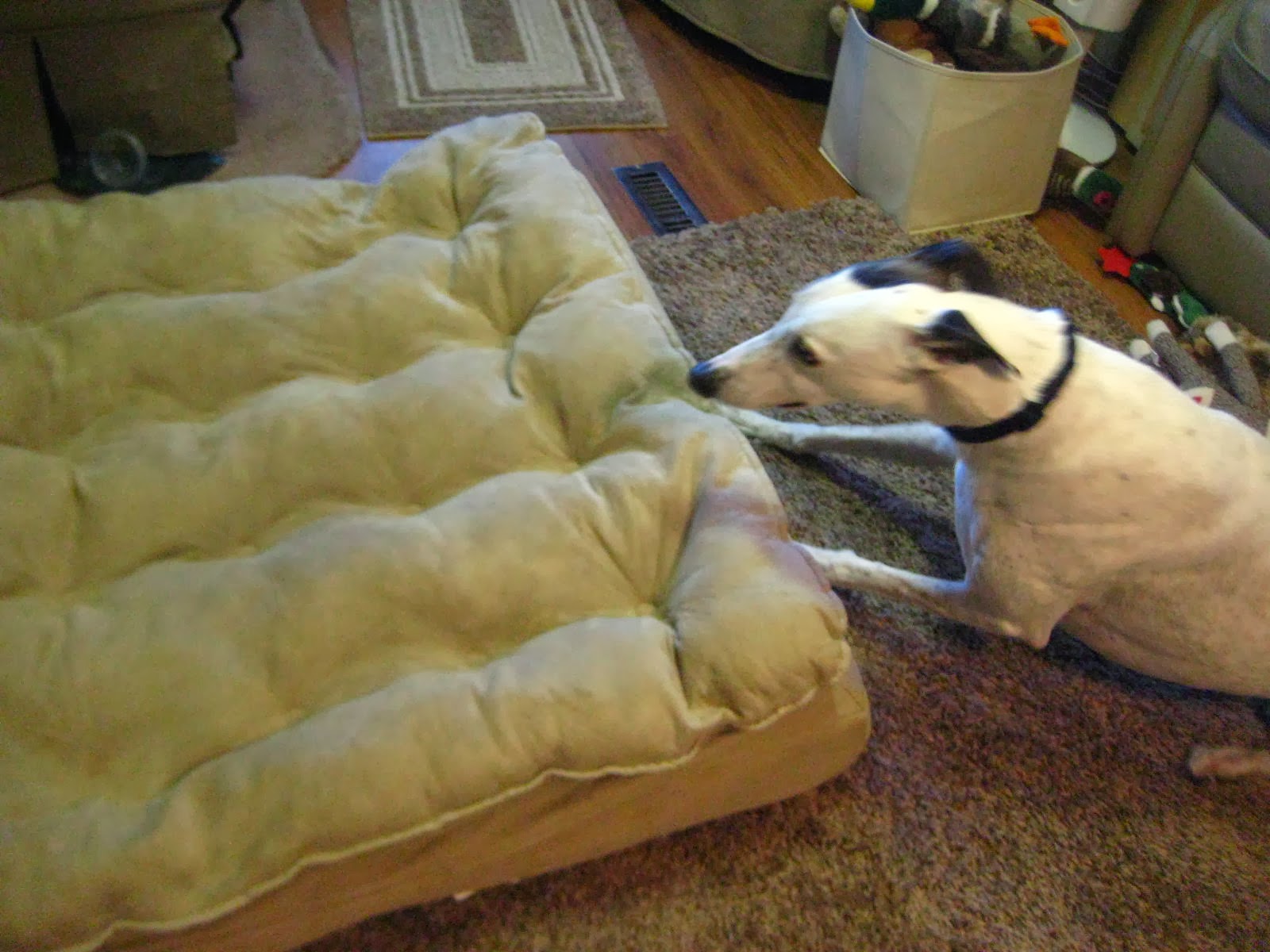 Joey,
The Greyhound Who Is Working On Getting The "Homey" Smell Back In His Bed
at January 22, 2014 6 comments:

Pep In My Step

It's me, Scout, to tell you all something.  Normally, I walk around like Eeyore.  I drag along without too much enthusiasm.  Mama is always telling me to pick up the pace.  Well, today, I had a pep in my step.  I was a happy girl.  We were all having a great walk.  Do you know what happened?  Joey peed on me!  That's right, he peed on my nose. My pep is now gone.  I don't think it will ever return. 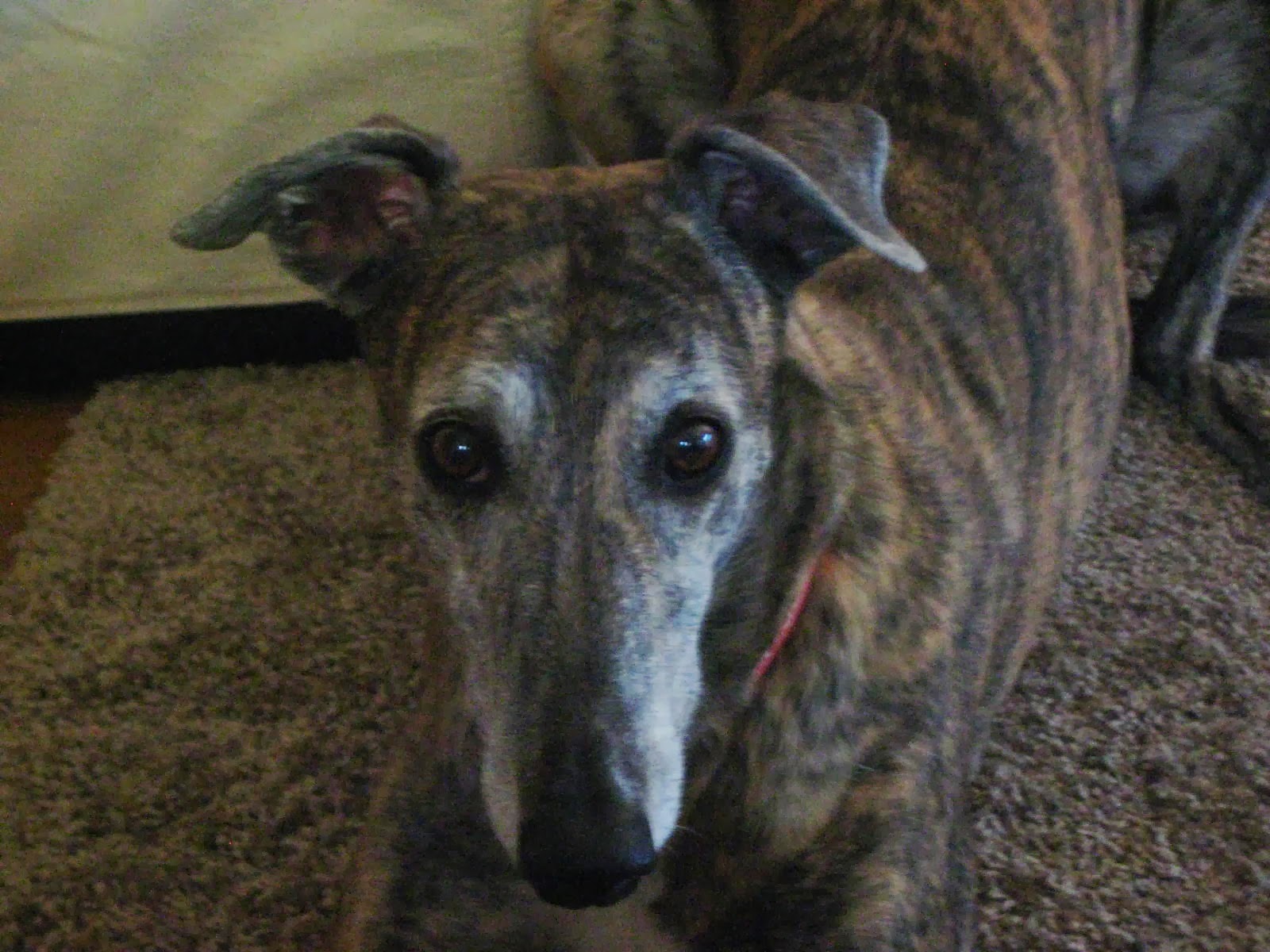 Scout,
The Greyhound Who Thinks Eeyore Has The Right Outlook On Life
at January 21, 2014 6 comments:

We have had a busy day.  This morning, Mama finally defrosted the freezer.  It needed it.  Then, she took us to McDonald's for lunch. We had McNuggets and fries!  Yum!  We sat outside for a while and then we came in to watch The Butler.  Scout and I fell asleep and that is how we get to our contentment pictures. 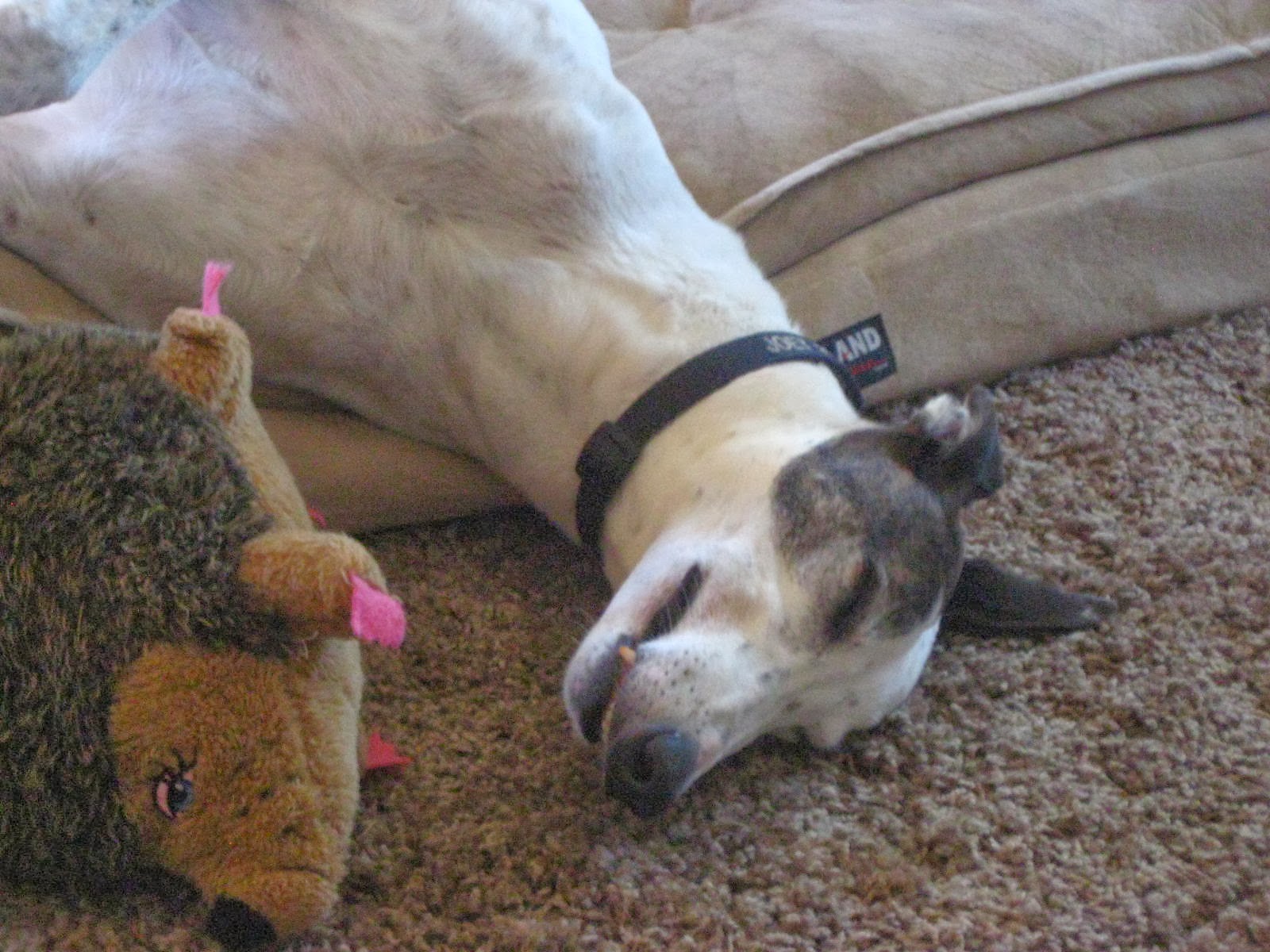 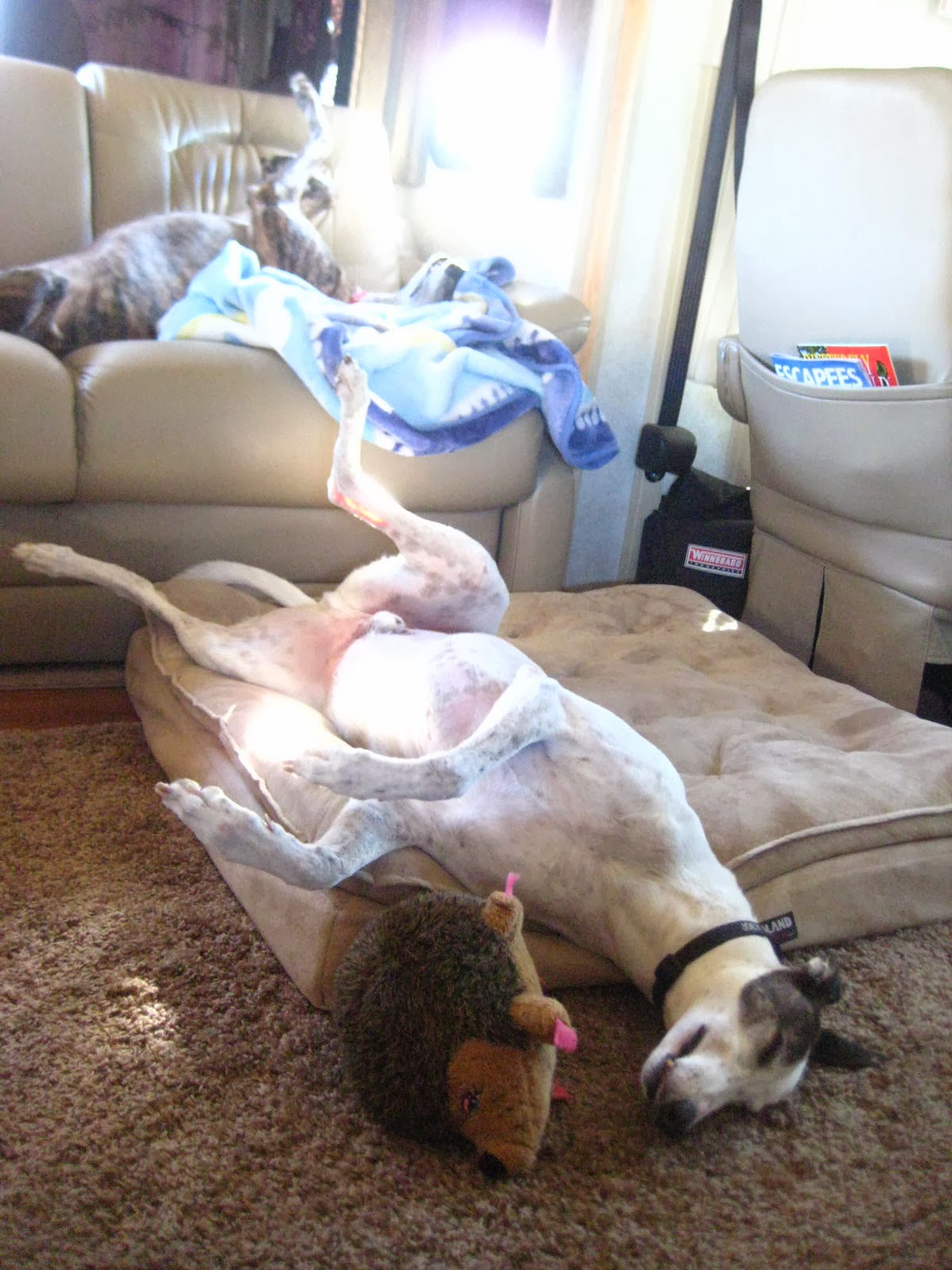 After the movie, Mama and I took a nice long walk without Scout. Scout used her "senior card" and stayed laying on her back on the couch.  Yep, it has been a good day.

What Is Happening In Our Kitchen This Week

Mama sometimes mentions what new gizmo she has bought or the new recipes she has tried, so maybe I will try to include that once a week.  I don't know.  Our blog pretty much flies by the seat of its' pants as they say.  We will give it a try and see what happens.

Mama uses an electric skillet daily.  She seems to have to replace them about twice a year.  The non-stick stops working and they start not to heat evenly.  She decided to try a different type of skillet this time since she doesn't think she should have to replace them so often. She is hoping that this one lasts longer. 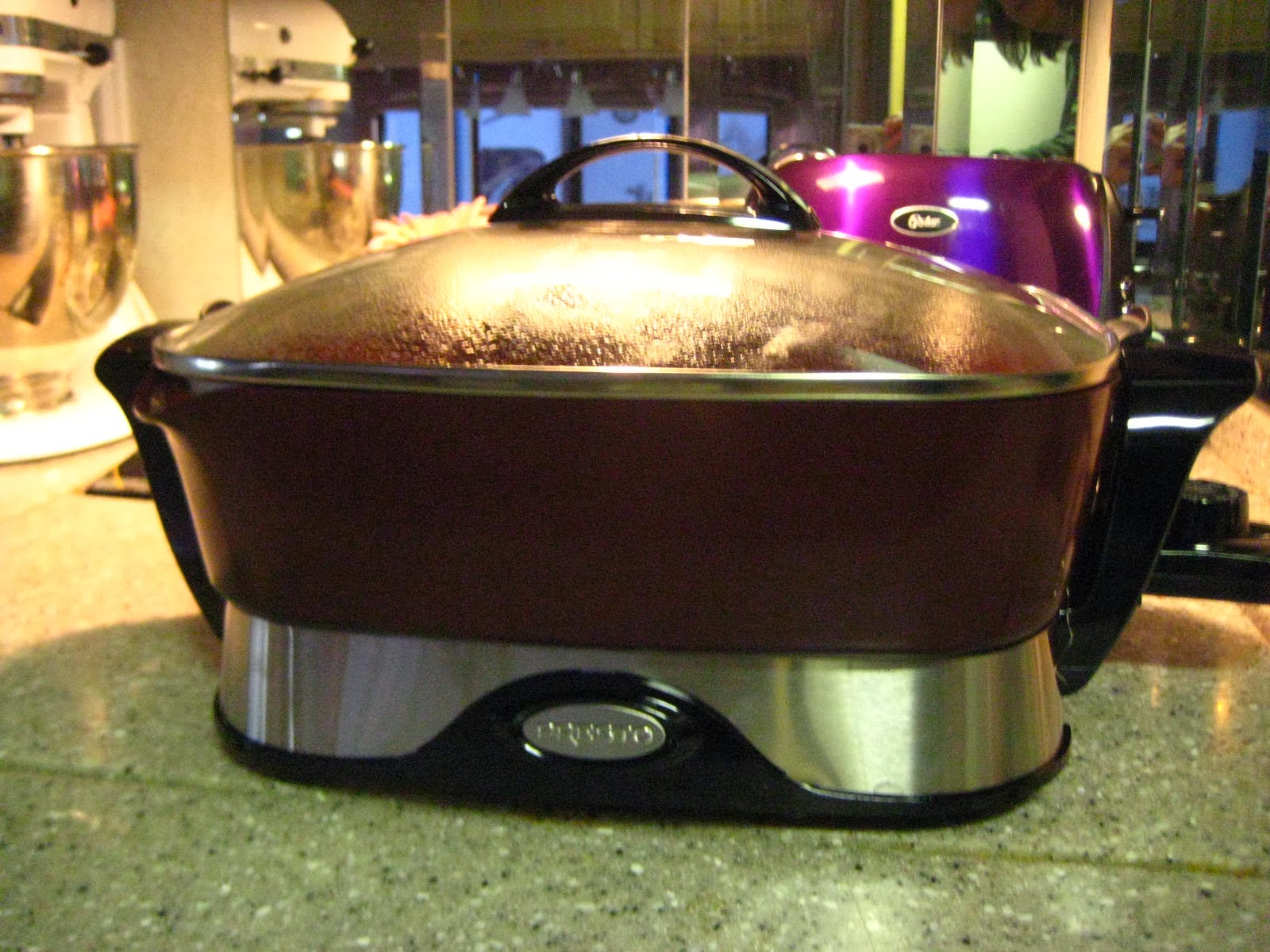 The is the Presto Foldaway skillet. Why is it different?  Well the cooking area is made of ceramic.  It is non-stick.  It is heavier than the other skillets she has bought and seems to be made well.  The main selling point of this skillet is that it comes apart for storage.  Mama didn't care about that though. She liked the ceramic cooking surface.

Mama really likes the way the skillet heats and so far nothing is sticking.  The skillet has a pour spout that can be used to hold a spoon with the lid still on.  Mama isn't really thrilled with having to take the base off to wash the skillet, but it isn't hard to do.

She purchased it at Target.

The next thing that has Mama excited is that she finally found egg rings at a reasonable price...$3.99 for two.  She kept seeing them for $15 and she said she was not paying that much.  She found them at Bed, Bath and Beyond, if you are interested. 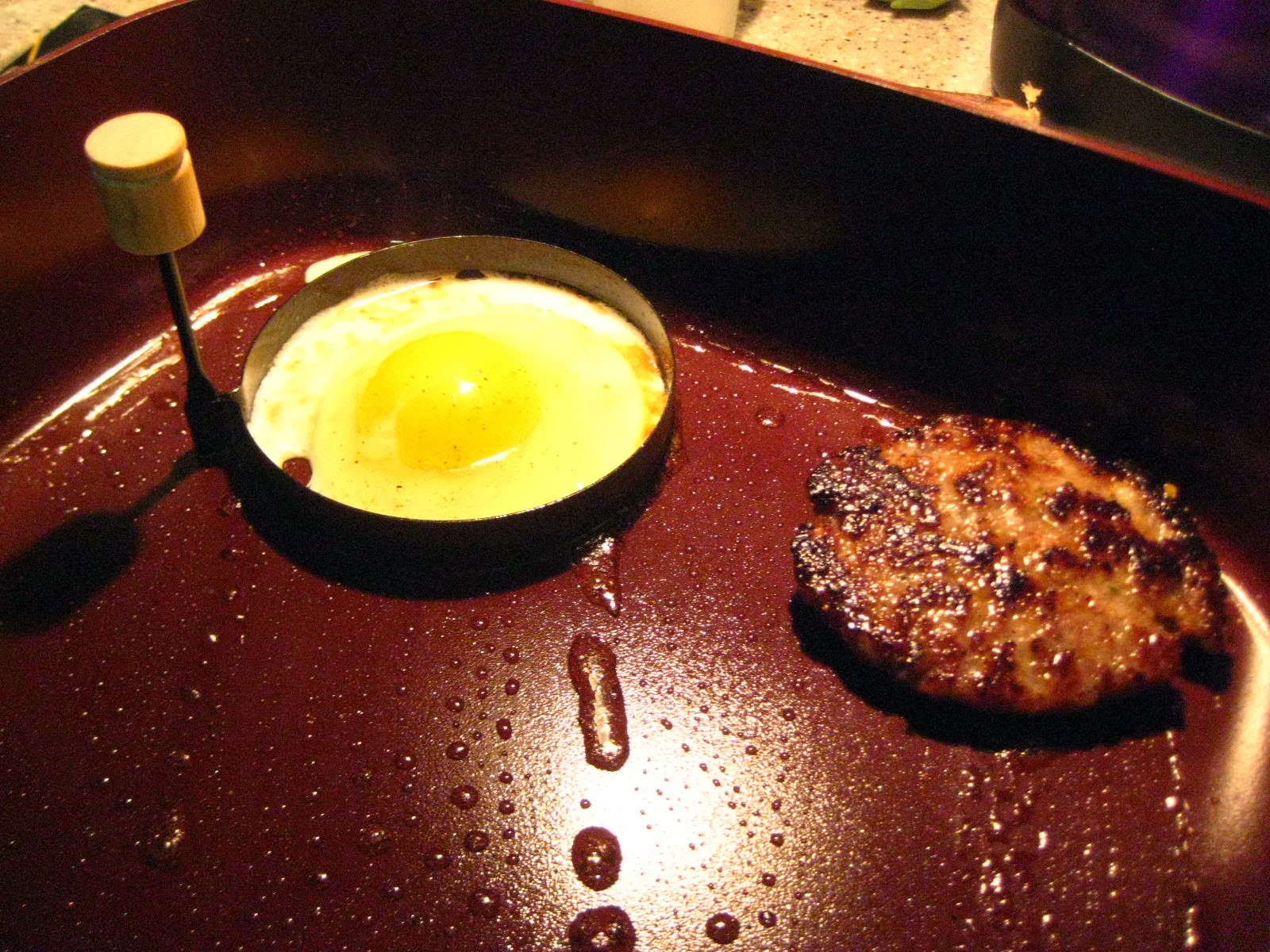 A  lady saw me lounging outside and said "that is pure contentment".  What do you think? 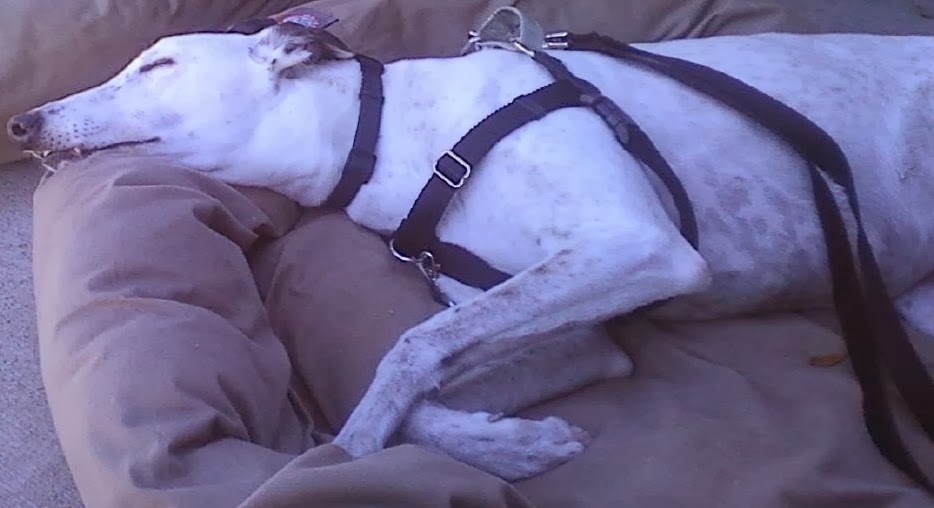 Have you tried these? 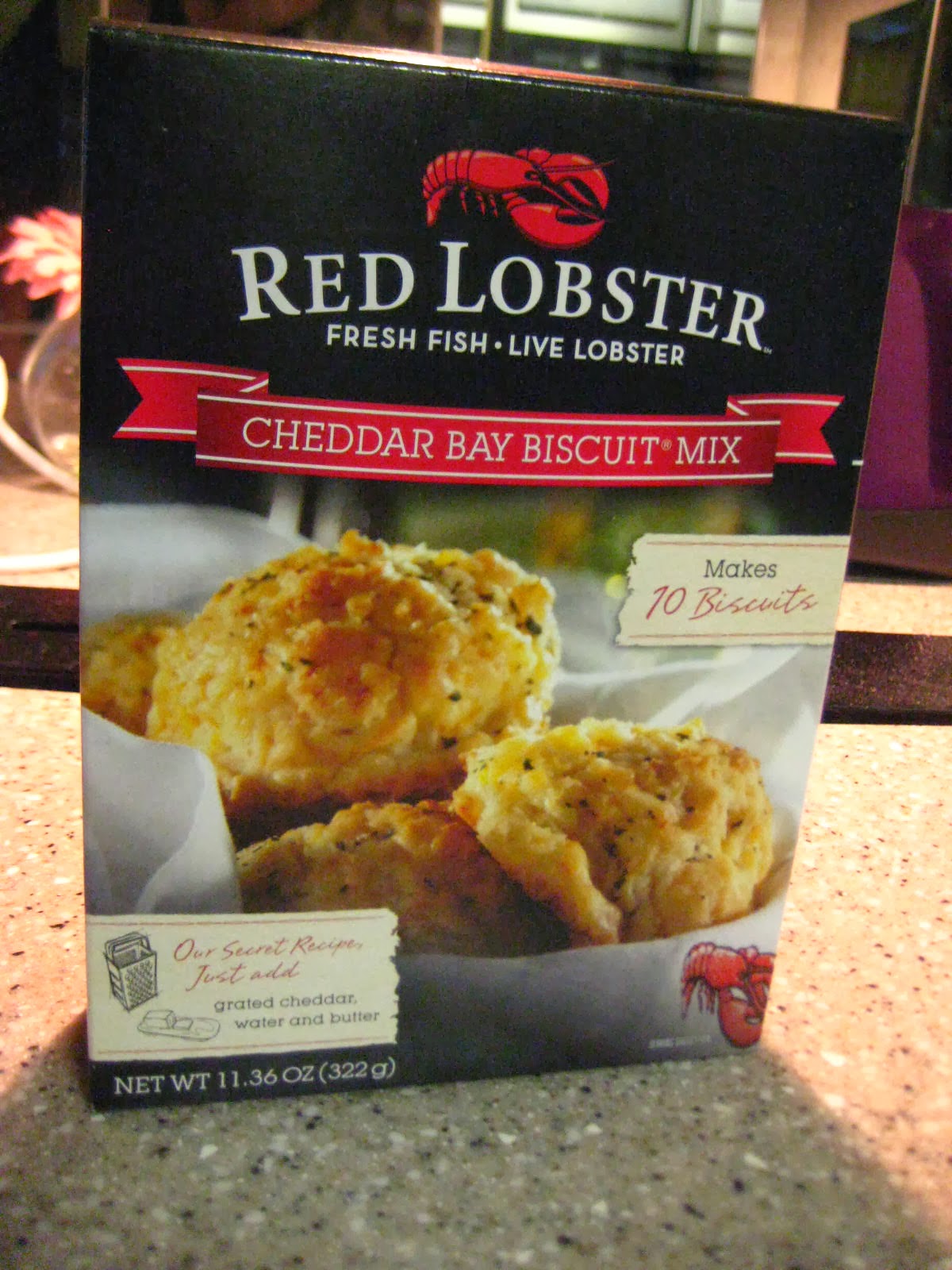 The folks really like them.  When Dad is away, Mama divides the mix into thirds and just fixes a portion when she wants it.  We haven't been allowed to try them, but they smell good.  Mama used to make her own but she said the seasoning for the butter is what makes them really special.

Joey,
The Greyhound Who Just Looked Up "Contentment" and agrees with the lady
at January 16, 2014 4 comments: 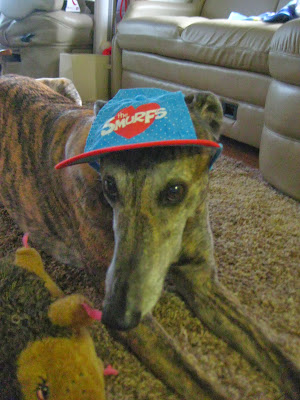 Why is Scout wearing a hat?  Mama thinks the sun hurts her eyes.  The vet said her eyes are fine.

Why is it a Smurf hat?  Because it was on clearance.  BOL!

Does Scout like it?  Nope, she rolled in the dirt with it. She was hoping to hit a pile of doggy doo doo, but she missed.

Joey,
The Greyhound Who Is Still Doesn't Have A Cowboy Hat
at January 15, 2014 5 comments:

Toys R Us Is Not Just For Kids

About  a week ago, "Aunt Lisa" bought her greyhounds a Toys R Us educational toy designed for dogs.  Mama had seen it at Petsmart but didn't think we would like it.  We have been quite bored though, so Mama decided to give it a try. 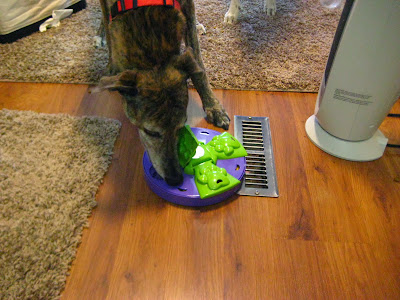 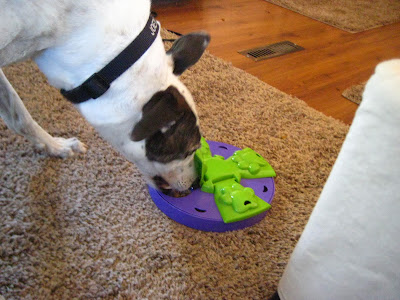 A Tale Of Two Dogs

It is a beautiful day here, but a little chilly in the shade for me. Scout never thinks it is chilly. 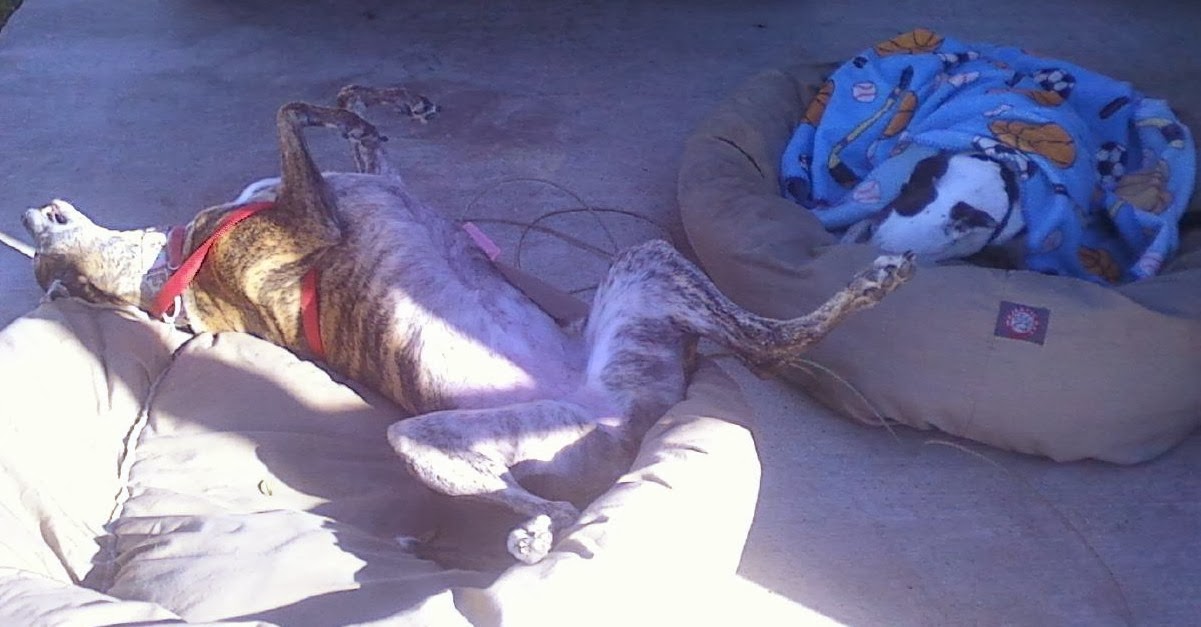 Joey,
The Greyhound Whose Sister Sunbathes Like No One Is Watching
at January 11, 2014 4 comments:

We were recently contacted and asked if we would like to do a book review.  Mama said the book is written by a retired racer like me.  I thought it sounded like fun, so I said "SURE".  The book arrived yesterday and it is autographed by Aggie herself!

The book is called The 45 mph Couch  Potato and it is written by Aggie (Bohemian Agile) and her Mom, Leslie Balcerak. 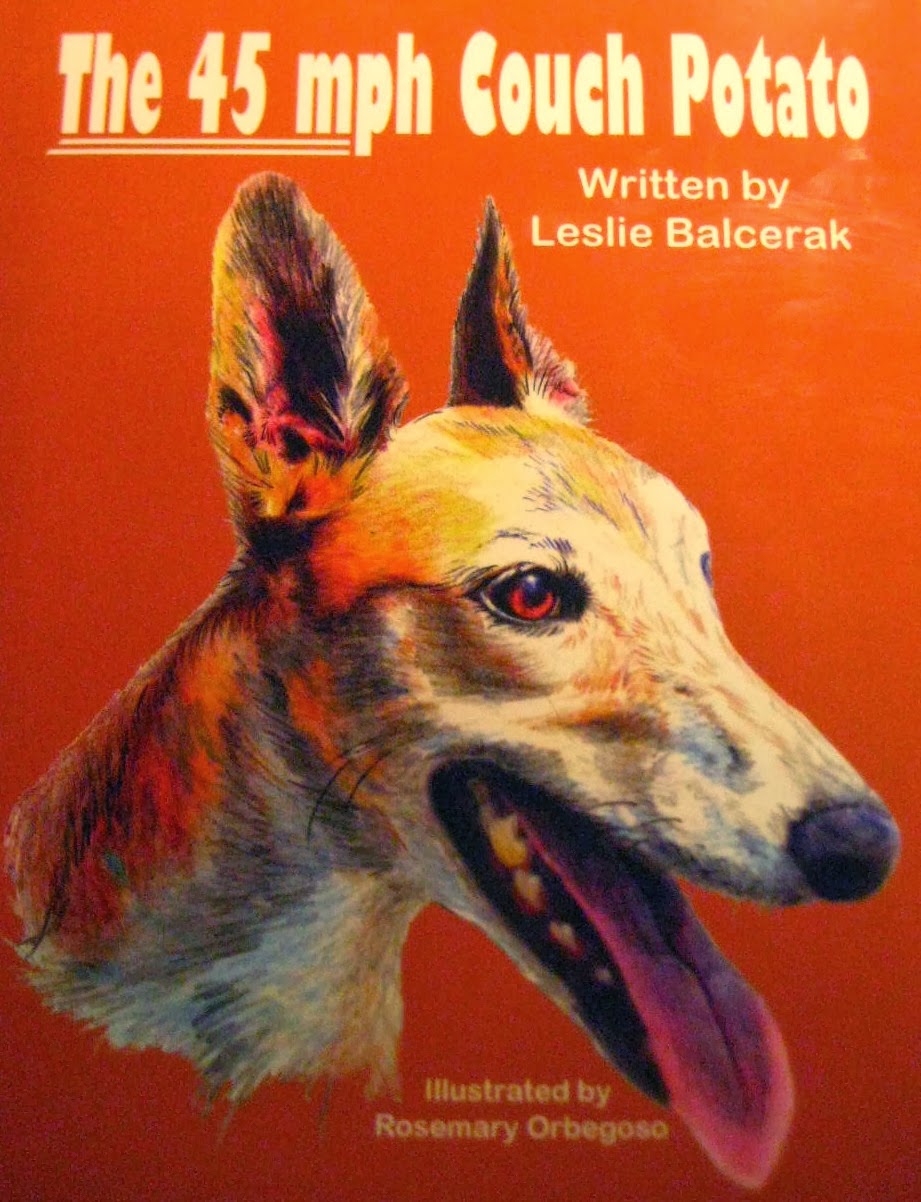 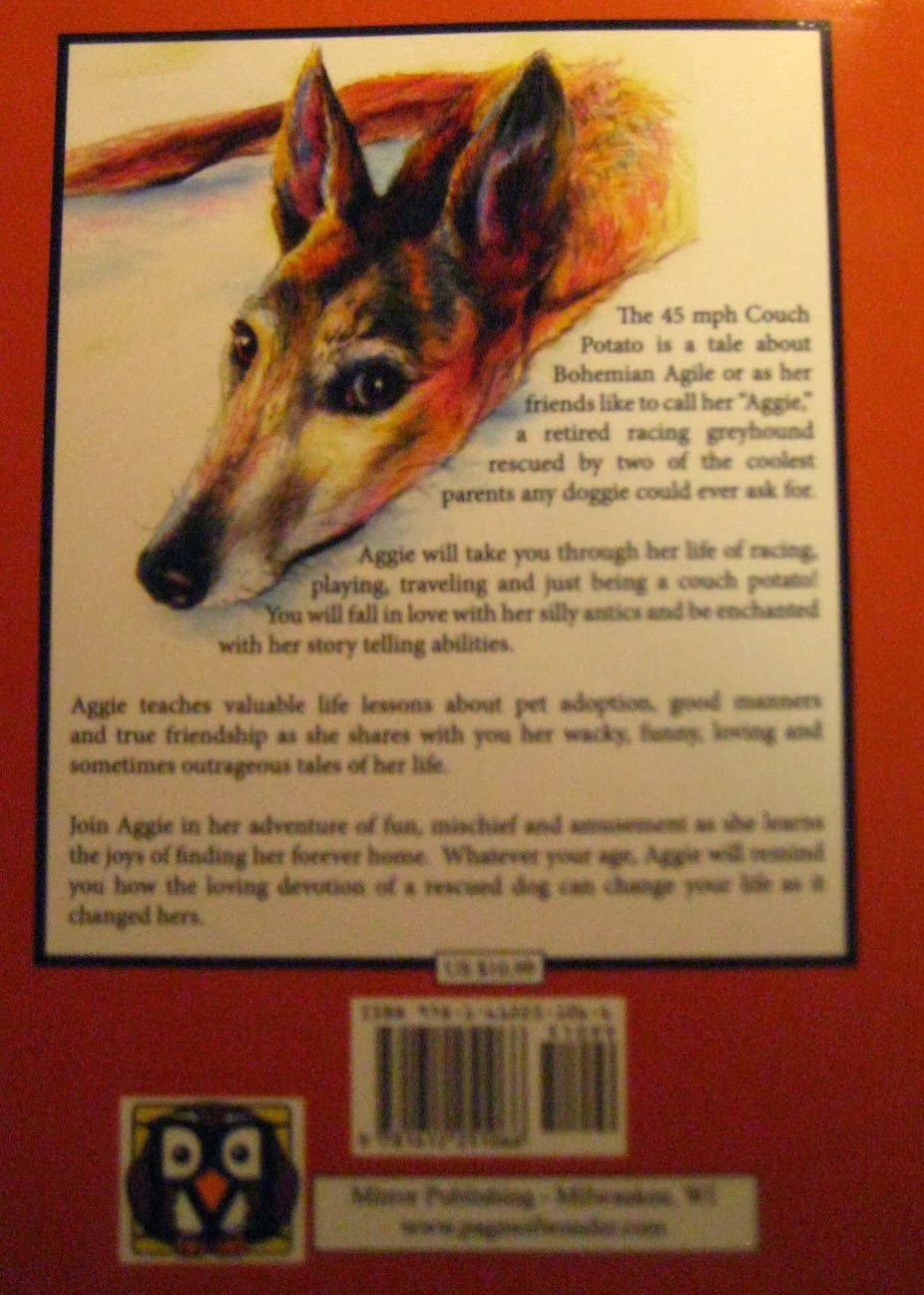 We were told the book was geared towards children, but Mama enjoyed it as much as we did.  Aggie talks about what her life was like when she was a puppy, a racer and then a pet.  I really enjoyed when she explained what it was like when she arrived in her new home with her parents.  Boy, that brought back a lot of memories for me.  I came straight from a kennel too and living in a home is so different from a kennel. 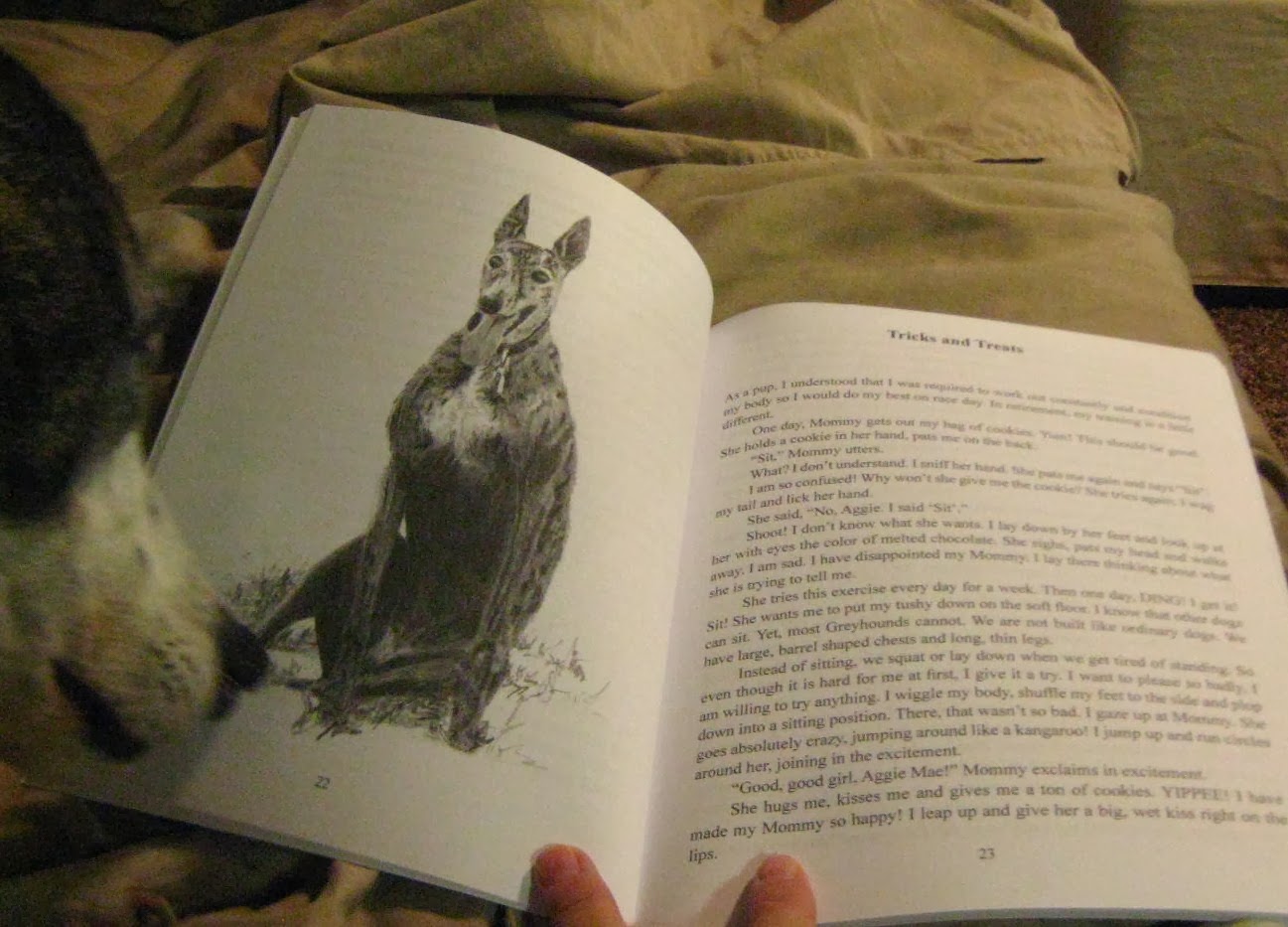 Aggie does a very good job explaining how greyhounds are different from other dogs with her stories.  There are lessons about bullying, not swimming alone, being polite and making new friends among others. The lessons are written so well into the story that you really don't realize they are lessons....very smart, Aggie.

The illustrations by Rosemary Orbegoso are great!

We really enjoyed the book. Mama calls it a "fun read". We read it in one evening and we didn't put it down until we finished it.


If you are interested in ordering a copy for yourself, you can visit Aggie at her website, The 45 mph Couch Potato.  The book is also available through Amazon as well as Barnes and Noble.

On a sad note....Aggie was attacked by an unleashed dog on December 26th.  She received more than 40 stitches and is at home recovering.  This is the second time she has been attacked.  If you would like to send her a get well wish, her email is the45mphcouchpotato@gmail.com

Email ThisBlogThis!Share to TwitterShare to FacebookShare to Pinterest
Labels: the 45 mph couch potato

The folks recently made a return visit to Galveston.  They decided to visit Bishop's Palace.  The house was built between 1887 and 1893 for lawyer and politician, Walter Gresham.  It survived the great hurricane of 1900 because it was built of stone and steel.  In 1923, the Roman Catholic Diocese of Galveston purchased the house and it served as the residence of Bishop Christopher E. Byrne who is from Missouri which is our home state.  The cost to built the house was $250,000. The value today is estimated to be over $5.5 million.

The home is quite impressive.  Home tours are given twice a day, but visitors are able to take an audio tour on their own and that is what the folks chose to do since they arrived 2.5 hours before the next tour.

We apologize for the crooked photos.  We fixed all of them, but the changes are not saving and we are tired of playing with it. 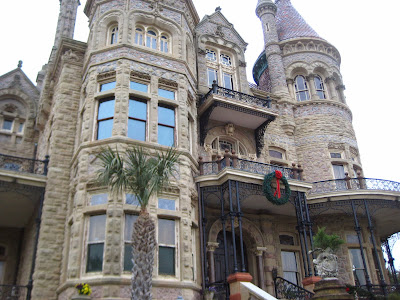 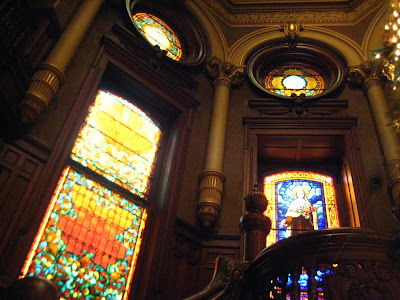 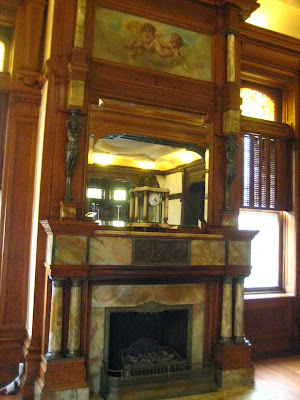 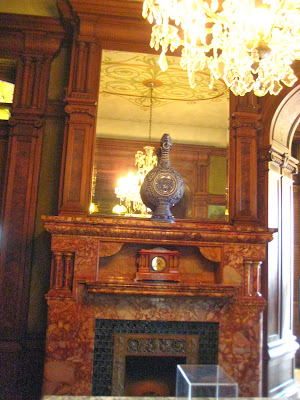 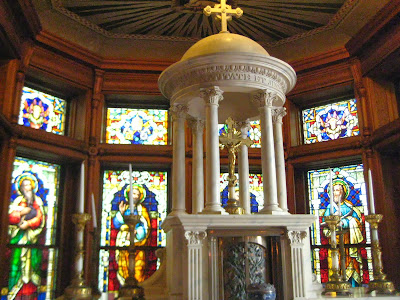 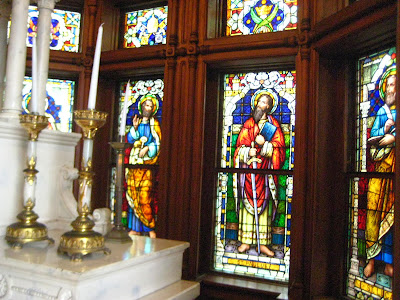 Mama said she enjoyed touring this house.  It was a little chilly even though the fireplaces were all running on gas.

The folks visited a few other places, but we will save that for another day.

Joey,
The Greyhound Who Is Thinking Of His Friends Who Are Having Bad Weather Today
at January 05, 2014 5 comments: