I asked Santa for a guinea pig.  He gave me a pig.  They are not the same thing, Santa.  I think I already have a pig like this.  I need to check my toy box.  Disappointing! 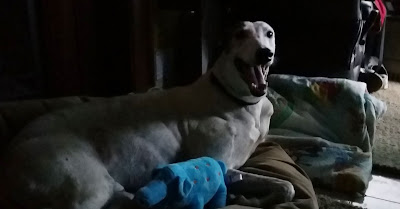 We haven't been around much.  Mom has been sick with a cold, allergies or sinus issues.  She is not quite sure.  Her biggest problem the last few days has been low energy.  She finally started feeling better yesterday and took Buddy out for a ride. Yes, she went out on Christmas Eve. She said the traffic wasn't bad at all.  I thought we had turned the corner on illness, but now Dad is sick.  I am really getting tired of all this coughing, sneezing and blowing noses.  It really interrupts my day.

We had a change in weather last Saturday.  We dropped over 50 degrees in just a few hours.  It was crazy!  We had wind chills in the single digits.  Mom said it was worse in Missouri and elsewhere.  I wore my coat and boot.  Mom wore a hoodie under her coat along with gloves and a scarf.  Going outside took a while to get dressed, so I made sure that it was time well spent.  We walked like it was a nice day.  Nice and slow.  BOL!   This weekend, it is nice and warm - 70's. The AC is running today.

Mom got a really bad haircut almost two weeks ago at Great Clips.  She asked to just have her hair trimmed and shaped up. Well, the girl either was inexperienced or decided to be creative. She cut off 2" on one side giving Mom a shag.  Remember Carol Brady?  Yeah, that was Mom's cut on one side.  She didn't even measure when cutting.  It was whack, whack, whack.  The first cut did the most damage. Another stylist had to come in and try and fix it. The bad stylist kept shooting daggers at Mom while her hair was being "fixed".  At the end, Mom lost 3" and was told it was all that could be done until it grows.  Mom is still pretty upset about it.  She is trying to decide if she needs to cut off more of her length to make it look right or just keep wearing hoodies.  She complained about the haircut and is supposed to get a coupon for a free haircut.  She hasn't received it yet.  It probably is not coming. She isn't planning on ever going back there, but Dad said he would use the coupon.

Want to hear another complaint?  Mom ordered a candy thermometer from Amazon.  It was supposed to get here last Friday.  The tracking said it was out for delivery.  Then, it said there was a delay.  Friday night, Amazon called and put Mom on a conference call with the supervisor of the driver.  He said the package had been lost in the vehicle, but was now found.  He asked if she needed it delivered Friday night.  It was close to 8 p.m., so Mom asked if they could deliver it on Saturday. The supervisor said that yes, they would deliver it on Saturday.  Mom said that was fine.  Well, they didn't deliver it on Saturday.  They scheduled it for Monday!  Grrrr!  Mom needed it for Sunday.  She called and explained the conversation of the night before that they recorded, but the best they could do was Monday.  Mom cancelled it and ordered it through Prime Now and had it within two hours.  Why couldn't they have done that?

Okay, for some fun stuff.  This is how we decorated this year. 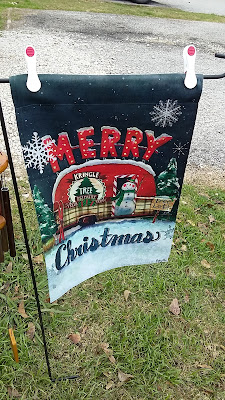 Mom decorated our windows this year. 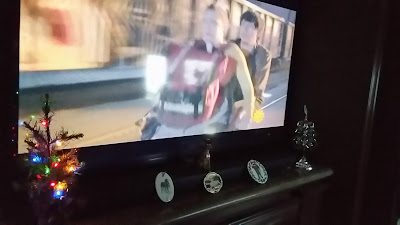 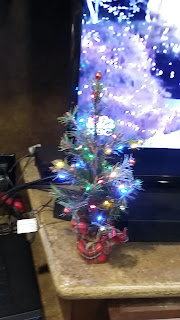 We also put a bow and "Merry Christmas" on our front door, but we haven't been able to get a good picture of it.

Mom will probably put all our decorations back in the shoe box tomorrow.  BOL!

The folks have reservation at Mom's favorite steak place here, but I am not sure they are going since Dad is sick.  We may just have nachos. 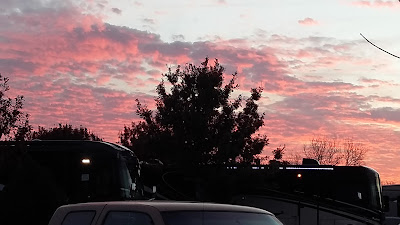 Joey,
The Greyhound Who Still Wants a Guinea Pig
at December 25, 2016 No comments:

It is another chilly day here.  The sun was supposed to come out, but it has been MIA all week.

Today was pretty exciting.  Mom said I was going to Petsmart to see Santa.  We had to get the oil changed in the Jeep first.  Let me tell you, getting the oil changed is boring!  Yes, there were lots of people and there was another dog there, but I wanted to get to Petsmart.  Finally, we were on our way.

When we arrived at Petsmart, it was just like you see on the commercials.  There were dogs all over heading inside. I was so excited!  I love going to Petsmart. I thought the line would be really long to see Santa, but there were only a few dogs ahead of me.  One dog surprised me by coming up from behind and he sniffed my stuff.  Mom said I jumped two feet off the ground. I doubt that was true, but my feet did leave the ground.  His nose was cold.

Santa didn't ask if I was good. He didn't ask what I wanted.  I think it was one of those "Don't ask, don't tell" things.  I was okay with that.

The pictures are free and they didn't mind Mom taking her own photos.  She put her camera on continuous mode and shot about 30. The following are her favorites. 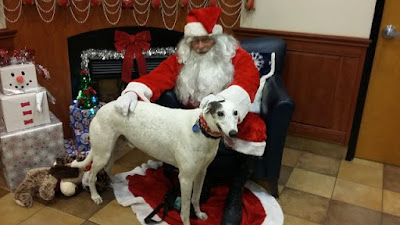 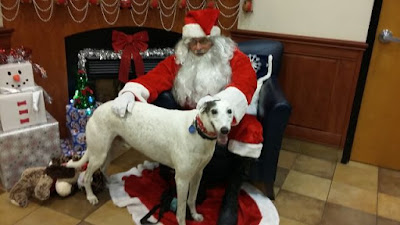 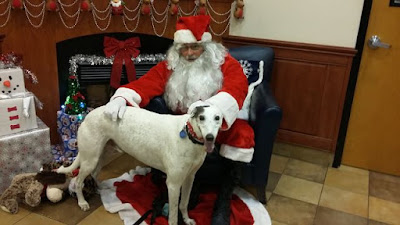 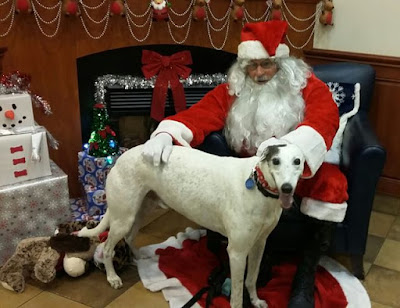 After we took the pictures, I did a little shopping.  I told Mom I wanted a guinea pig for Christmas.  She said that was probably not going to happen.  I then said a bully stick.  I heard the folks discussing it, but it doesn't sound good either.  They think I will cut my tongue again.  I didn't see any toys that I wanted.  Petsmart is just too exciting to pick out a toy.

We stopped at Wendy's on the way home for lunch. Yum!

I am now settling in for a long nap.  It has been a good day!

Joey,
The Greyhound Who Saw Santa
at December 10, 2016 No comments:

I Was Promised A Warm Winter

The folks told me that we would have a warm winter.  They were wrong.  They said on the news that it hasn't been this cold in two years.  Today, it didn't get above 35 and with the wind, it was in the 20's. I had to wear a coat!  Mom asked a guy that works here if they shut the water off when it gets below freezing.  He said they don't.  They just put a sign up saying to keep your faucets running.  Tonight, it will get down to 24, so we will see what happens. We have a new heated hose, so hopefully it works for us. Mom has been trying to conserve our propane, so we have just been using our fireplace and our furnace on the electric mode.  We have kept all the shades down to keep the heat inside.  Mom stresses a lot about using our propane because getting it re-filled involves driving the rig to a place to have it filled.  We know that much of the country is much colder than us and we shouldn't be complaining and we are happy that we haven't seen ice or snow yet.  We just don't like the cold.  It takes a long time just to get ready to go outside.  Gloves, coats, hats, etc.

Santa will be at Petsmart this weekend.  Mom said we might go.  She made me a new collar so that I look extra handsome when I see the big guy.  I really don't care about seeing him.  I just like going to Petsmart.

You know that Mom loves her air fryer.  Well, she was frustrated with the size, so she bought a bigger one.  She used her work money to buy it, so it was free in her mind.    This one is a GoWise 5.8.  Her other one is a Paula Deen 3.5.  Paula Deen just came out with a bigger one but it is sold out supposedly until spring.  There were a couple of factors that influenced Mom to buy the GoWise.  It has buttons and not dials.  Mom said that is easier for her.  She could also buy it through Amazon and use her work money on it. She hasn't fixed any meals in it unless you count lunch, but so far she is happy with it. It arrived on Monday. She will fix wings next week and that will be a good test.  She used to have to do wings in batches and she thinks she will be able to do them all at once with the new fryer.  She may try to make Red Lobster biscuits in it tonight to go with our Chicken Marsala that has been cooking all day in our slow cooker.

Mom and I have been hunting squirrels every day except today. They were not out today.  I searched and searched and couldn't find them.  Mom said they are probably in bed. :::rolls eyes:::

Joey,
The Greyhound Who Is Glad That Nice Weather Is Returning This Weekend