Today was a beautiful fall day here in Lancaster County.  The morning started out quite chilly, but the sun came out and I enjoyed watching Dad wax our rig.  The day was so nice that we didn't even turn our AC on.  That is rare since we are in the sun. 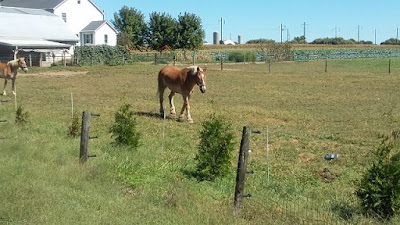 Last Sunday, the folks attended the Hershey RV Show.  Our neighbors had bought five day passes, but since they were going home on Sunday, they gave their unused tickets to the folks.  Mom said that made her day.  She expected the show to be really crowded.  Their plan was to get there early and to look through RVs first and then go inside to see the vendors.  Mom said the plan worked well.  They were interested in looking at small rigs.  Mom said it would be nice to have one that she could drive.  They actually found one that they liked.  It is only 25',  Can you imagine living in that full-time?  Mom showed me pictures and showed me a couch that would be mine. Well, she said we could share it.  We would have our own TV. Dad could have the one in the living room. No, we are not buying it.  We are just thinking.  There is actually an 11 month wait to get one.

There is a microwave and a decent sized refrigerator.  The biggest problem is closet space.

Yesterday, the folks toured QVC Studios.  QVC is a shopping channel.  Mom used to be a big fan when we had a house.  She rarely watches now, but she thought taking the tour would be fun. 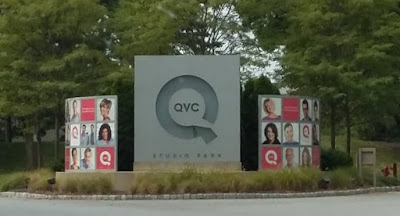 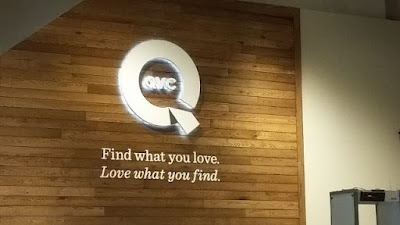 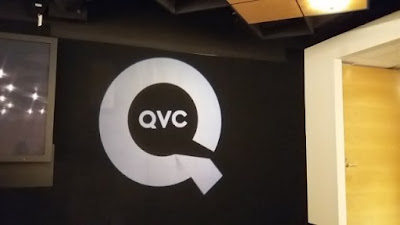 Pictures were only allowed in some parts of the tour.  The tour guide was not very enthusiastic. She said she works in the store too.  Mom said it seemed like being a tour guide was not her favorite pat of her job.  There were nine people on the tour.  Dad was the only guy.  Four women were really loud and Mom said the tour guide didn't seem to know how to handle them.  Only a few people had ever watched QVC which shocked Mom.  She said they didn't even know that it was a live show. 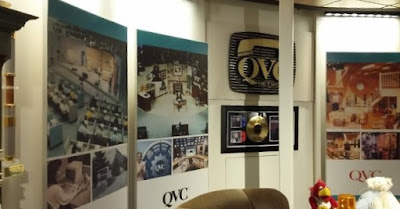 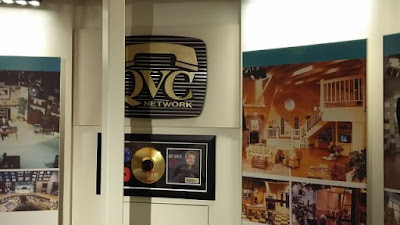 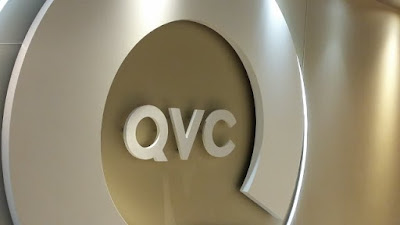 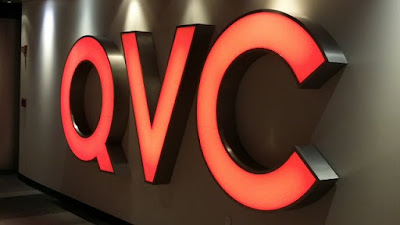 The most disappointing thing was that they were not able to see a host doing a live show.  They were in a different studio than the tour that day.  Mom was surprised by how many different studio sets they actually had.  They used to have just one and the room rotated, but now they have a lot of different rooms.

They saw the control rooms through glass and the people working in them. They had a football game on which everyone thought was funny.

The tour was $10 a person.  They have more expensive tours where you can go backstage, but Mom chose just the basic tour.  She said it was fun.  It would have just been more fun to actually see one of the show hosts doing their job.

Joey,
The Greyhound Who Is Happy That The Weather Has Turned Cool

Life is pretty slow and peaceful here.  The campground is supposed to be sold out today with people in overflow parking. 16 RVs are scheduled to come in today.  Yikes!   Imagine our surprise when someone moved in right next to us yesterday.  We didn't even think it was really a spot.   Mom and I always sit in the shade along the well house, but we couldn't do that today because it would actually be in the neighbor's yard.  I still thought I should be allowed to be there, but Mom said no.  She explained that the new people's RV was giving us a shade on our site, but I still wanted my old spot back.

A man yesterday said that I was not skinny like other greyhounds.  Mom told him I have been retired for six years.  I wanted to ask him how long he has been retired because it definitely looks like more than six years.  BOL!


Dad finally got new glasses on Saturday.  He got no-line bifocals.  He has tried the lined kind twice and couldn't get used to them.  He still says he will never be able to see things clearly without moving his head.  Mom keeps telling him to give it time.  She didn't have any problems when she got hers. While the folks were waiting for Dad's glasses, they ate lunch. (see photo)

On Sunday, the folks went out for breakfast. They went to buffet.  Mom said it was okay.  They then came home and picked me up so that I could go to the park.  We went to a different one this week.  There was a path along the creek, but it was a big gravel path.  I doubt we will go back.  It was not fun to walk on. 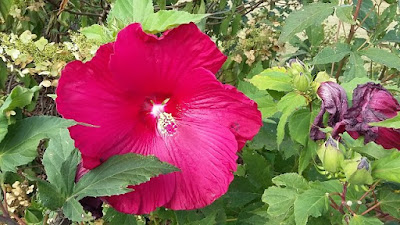 After the park, we came home and rested.  The folks went to another buffet for dinner.  Mom said it was okay, but not worth $23.95  They found one that is several miles away that is really good.  Mom said when they arrived there, they were asked if they had been there before. They said no.  The waitress told them to pace themselves.  BOL!  I bet they go back to that one. 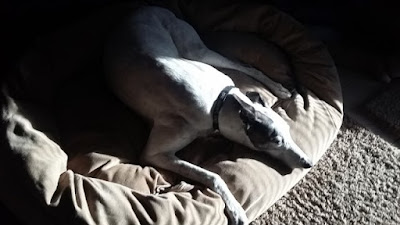 Mom is still going strong with her air fryer.  Monday, she made a molten chocolate cake.  I didn't get to taste it since it was chocolate, but it smelled good.  Last night, she made pickle brined fried chicken and a double baked potato.  I think she may fix vegetables in it tonight.  She bought what she says is an "awesome" cookbook and has been trying out recipes.   It is called Air Fry Everything.  It is currently only available on QVC but Amazon will ship orders in December.   It has easy, every day recipes.


The Hershey RV Show started today. We think that is why our park is sold out.  We are not that close to Hershey, but people do come from all over to attend the RV show.  The folks are going Sunday. Mom would prefer to go during the week, but Dad has to work.

Joey,
The Greyhound Who Doesn't Like When The Campground Is Full
at September 14, 2016

The folks visited Valley Forge on Saturday.  It was a beautiful day.  It was sunny and breezy, but not hot or humid.  Unfortunately, all the photos from that day and actually the entire weekend are gone.  They are not on Mom's phone or the computer.  She must have accidentally deleted them.  She is not sure how she did that, but they are gone.  :::sigh:::  Since photos make a blog more fun, we are going to add some that we recently took around camp.

George Washington and the Continental Army stayed at Valley Forge from December 1777 to June 1778.  When we think of Valley Forge, we think of soldiers freezing.  None actually froze to death there.  Morristown was actually quite a bit colder and soldiers did freeze to death there.  In fact, if it had been colder at Valley Forge, disease wouldn't have been as strong as it was.  Disease killed 2,500 soldiers.  There were about 400 women in camp.  They were wives of soldiers.  Martha Washington spent the winter there.  She and George had a nice house.  The house still looks good.  Mom had pictures of it.  No battles actually took place there.  It is just where they spent the winter.  If you want to read more about it, here is the website:  Valley Forge

The folks took a 90 minute trolley tour of the grounds.  They made two stops.  One was at a re-created settlement and the other was at Washington's headquarters.  The tour guide was really good.

On Sunday, the folks visited Ephrata Cloister,  It is one of America's earliest religious communities.  It was founded in 1732 and the buildings are original.  It was made up of German settlers and Mom's family name is listed as being there.  They felt they needed to be as God like as possible. They slept about four hours a night and that was interrupted for prayer in the middle of the night.  They slept on a narrow board and their pillow was basically a brick.  They rarely ate meat. They ate roots and bread.  They worked hard and prayed a lot.

Mom thought Ephrata Cloister was very interesting.  You can see photos of it on the website.

On Monday, we went to the park.  I enjoyed all the new smells.  We walked along the river.

Our campground was sold out over Labor Day. There was a Great Dane across from us. She was huge!  She was twice as big as me.  She was hard to handle with her flexi leash.  Her people were different. There was a grandfather, grandmother, two sons (who stilled lived at home even though one has five kids) and a daughter-in-law. The grandfather came over and told us all about the family. We thought it was odd that he pointed out that the grown sons still lived at home.  The five kids all piled into my bed without even asking me if I minded.  I was in it at the time. It's a good thing that I am a mellow guy.  Mom still got me out of that situation quickly and we avoided them as much as we could after that.  They let their Great Dane run free part of the time and she scared some of the small dogs.

We are told that the campground will be full again this weekend.


Mom is still loving her air fryer.  She made a roasted chicken and also some great sweet potato fries.


It is a hot and humid day here today.  It was too hot to even sit out this morning.  We normally sit in the shade in the morning, but Mom said no this morning and I agreed.  We are going to relax in the AC for the rest of the day.

Joey,
The Greyhound Who Hopes The Campers This Weekend Are Better Behaved
at September 08, 2016