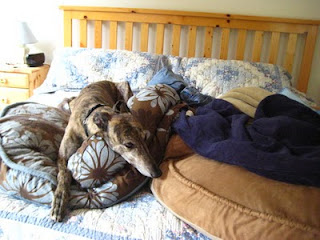 We are waiting for the phone to ring. We had our showing today and we are anxiously waiting for an offer to come in. We know that it may not happen, but it's hard not to be anxious. Mama and Daddy were rushing around this morning putting finishing touches on the house. Scout and I tried to help. We didn't even mess up the bed after it was made.

After the showing, we went to the park. We walked through the campground for the last time this year. It closes after today. The park is open in the winter, but the campground is blocked off so no one can walk through it in the winter. Mama said if we move, we probably won't visit the park very often because we won't be living around here. It's strange to think that our favorite park will not be a few minutes from our house. Mama said we can still visit from time to time though and she said we will probably find a new park to call our favorite.

We are spending the rest of the day relaxing. No one comes here on Halloween, so it should be a quiet evening unless we get an OFFER ON THE HOUSE and then Mama will be running through the house screaming and Scout and I will be chasing her and goosing her. LOL

Jack
The Greyhound Who Hopes The Phone Rings Today
at October 31, 2010 5 comments: 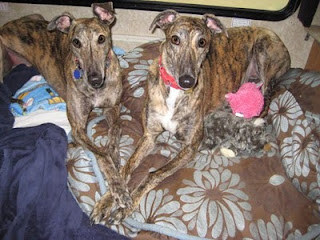 You are not going to believe this. We have someone who wants to see our house tomorrow at 9 a.m. Our contract runs out on Monday. We had accepted that we would be living here through next year, but maybe, just maybe, we will get an offer. We have our paws crossed. This is our last chance to sell this year. Mama and Daddy have been busy cleaning and doing yard work to make it look as spiffy as possible. I have been trying to help, but Mama said I'm getting in her way. What? That can't be. Daddy was trying to get some squeaks out of the floor, so Mama was walking on them so he could hear them in the basement and I was just following her around. That's getting in the way? Sheesh!

When Mama got the call yesterday about the showing, she was not very excited. She said that selling now would put us in the RV in the dead of winter and that is not what we wanted. Plus, the propane man came unexpectedly this week and filled up our tank. We were planning on calling him after the house came off the market. However, Mama is now hoping we get an offer even though the timing is not good. She said we can make it work. Daddy said if the people want to move in by Thanksgiving, that's not a problem. We are trying not to get too hopeful, but if the people want to see our house at 9 a.m. on a Sunday, they must be really looking to buy. We figure they are looking at other houses, too, but we hope we can win them over. 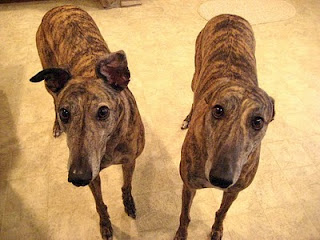 Jack and Scout reporting to you this morning.

Jack: We were grounded yesterday. NO TV!

Scout: I really don't care for TV much so it didn't bother me. There is a commercial I like though. It has a whale in it and I've been imitating his sounds which is driving Mama crazy! LOL Jack loves his TV though, so he was very upset that he couldn't watch it.

Jack: It's Scout's fault that we got in trouble.

Scout: You could have said "NO" Jack, but you didn't.

Jack: What did we do? Well, we got Mama up around 2 a.m. to go outside. That's not why we got in trouble though.

Jack: We got in trouble because we did zoomies around the yard. Mama told us to come in and we just ran circles around her.

Scout: It was so funny! Mama was standing out in the middle of the yard dressed in her jammies. Her arms were flapping and she kept yelling at us to get in the house. We just kept running circles around her.

Jack: Mama said it looked like she was a lion tamer in the circus.

Scout: It was a lot of fun, but Mama didn't think it was. She said "YOU'RE GROUNDED, NO TV!" I just laughed and said "whatever". It was worth loosing TV for a day.

Jack: So, yesterday, I missed all of my favorite shows. I hope I can catch up on Days Of Our Lives today because it was at a dramatic part when it ended on Tuesday.

Scout: I'm sure you didn't miss anything, Jack. That show moves slower than a turtle.

Jack: So, that's why we were grounded yesterday. We didn't get Mama up last night, so we are golden today.

Scout: Yeah, we are golden. LOL

Jack and Scout
The Ungrounded Greyhounds
at October 28, 2010 3 comments: 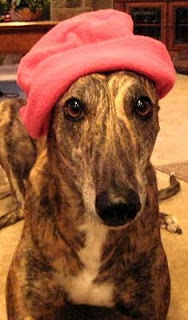 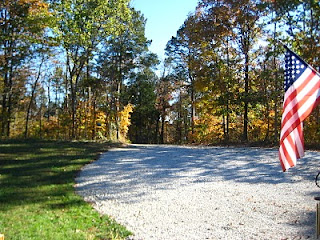 We've had a very warm and dry fall. We didn't expect the leaves to be very pretty this year, but we think our yard has looked nice. The above photo was taken from our front porch. It looks prettier in person.

Yesterday, we went to the state park which is just a few miles from our house. It's a small park that Mama and Daddy take us to when the weather is nice on weekends. We walk through the campground to give Daddy his "fix". 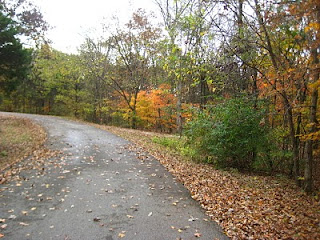 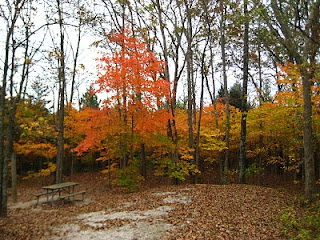 Mama tried to take photos of us walking, but we were too fast for her. 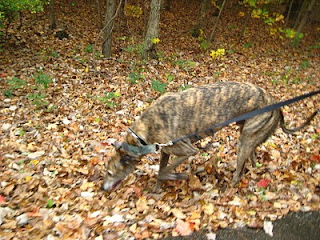 She took a photo of Scout, but Scout didn't want it posted because she looks "fat".

This is the last week for our house to be on the market. Mama says it will be nice to have a break from having it for sale. She didn't even clean this weekend since no one has looked at it since July 3rd. We really hoped it would sell this year, but it was not meant to be. We will put it back on the market in January and hopefully 2011 will bring us a buyer. We are ready to start our next adventure in a new house and a new town. We may no longer be "two greyhound town" when we move because there may be other greyhounds around.

Have a nice day! 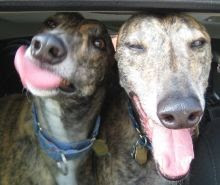 We've Been On Vacation!

Jack and Scout here sharing the keyboard this morning.

Scout: Did you miss us? We've been on vacation with Mama and Daddy.

Jack: We were supposed to only be gone five nights, but we were having so much fun that we stayed seven nights. The weather was perfect. Mama and Daddy pretended that they were retired like us.

Scout: We took lots of walks and ate lots of good food.

Jack: Scout got tired on Day 5 and turned into a mule on the walks though.

Jack: The place was booked up, so on the morning of Day 6 we had to try and get a non-reservable site. We searched for a site but nothing was available. We were just getting ready to leave to come home when we saw a camper leave and Mama told Daddy "Go get that site!" Daddy did and we moved the RV up this huge hill and we camped at that site for two nights. We didn't like that campsite as well because the walking paths were not as good, but at least we were still camping.

Scout: Grandma and Grandpa came to visit us at the campground. They stayed at a cabin. We looked inside their cabin but couldn't go in because it said "NO PETS ALLOWED!" How rude is that?

Jack: Mama and Daddy ate out quite a bit, but Mama always brought us back something. Grandma bought us KFC one night. We definitely are big poultry lovers. 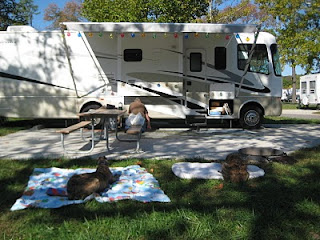 Jack: Here we are watching Daddy loading up the RV on the day that we thought we were headed home, but we ended up staying.

Scout: We were upset when we thought we were going home, so we both refused to look at the camera. 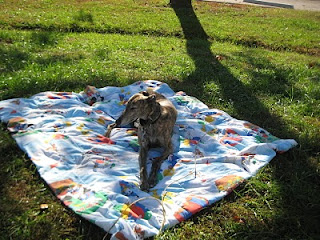 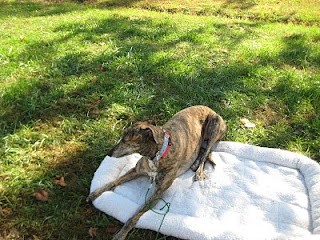 Jack: This picture is not very good because it was taken from the Jeep, but here are some people fishing. It's really pretty in person. 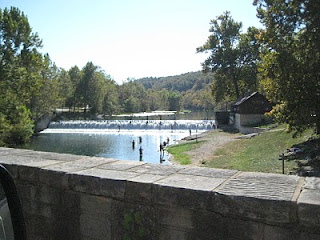 Scout: I wanted to get in the water, but Mama said no. She wouldn't even let us get near the water because she said we might get fish hooks in our feet. Daddy said that would really, really hurt.

Jack: Yeah, we were really careful not getting near the water and then Grandma found a fish hook on our patio at the campsite. :-O Luckily, no one had stepped on it.

Scout: We are back home now and getting back to our normal routine. We are a little sad because we had such a great time on vacation. Mama said she doesn't think she has ever seen me so happy. I just loved walking since the weather was nice and there weren't any bugs. I did get tired at the end though.

Jack: The best part of being home is being able to run in our yard.

Scout: Yeah, running in the yard is the best!

Jack and Scout
The Trout Fishing Greyhounds
at October 14, 2010 4 comments: