Scout Is Not Always Beautiful 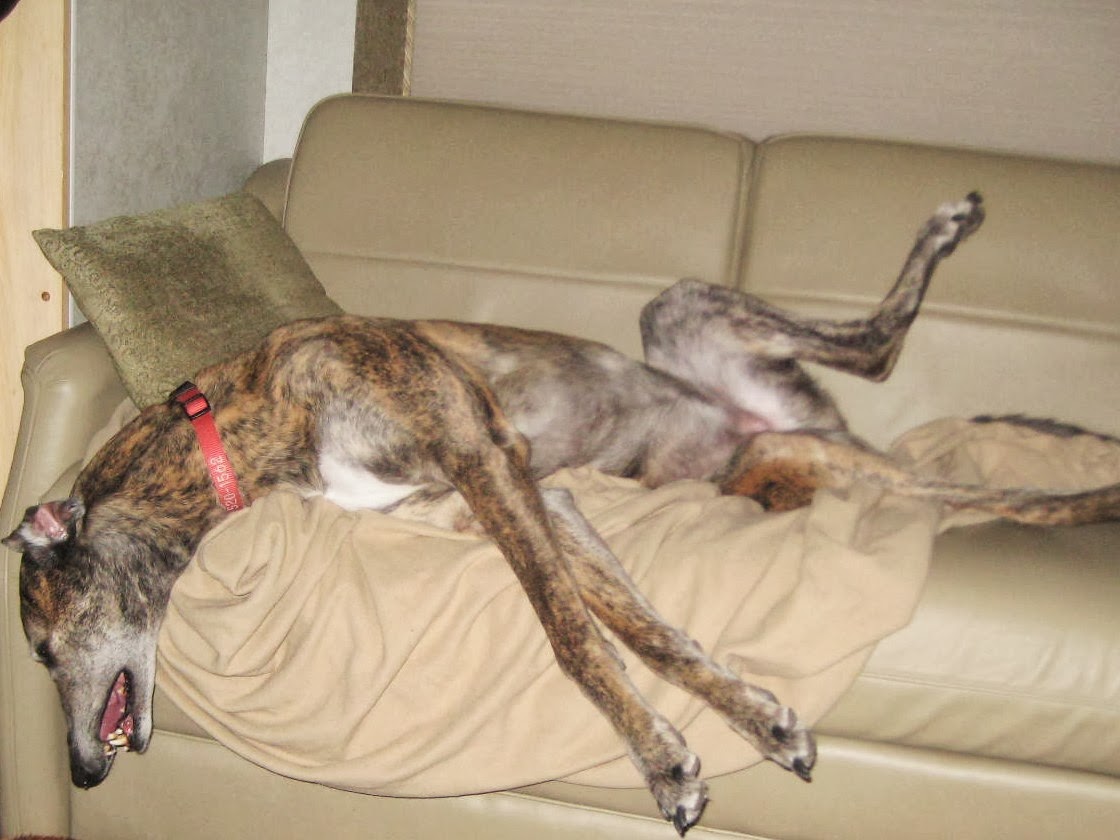 People are always telling Scout that she is BEAUTIFUL.  I think they should see her the way I do.  BOL!  She is actually sleeping here.

Joey,
The Greyhound Whose Sister Can Look Pretty Scary At Times
at February 28, 2014 4 comments:

Email ThisBlogThis!Share to TwitterShare to FacebookShare to Pinterest
Labels: greyhounds, rving with greyhounds 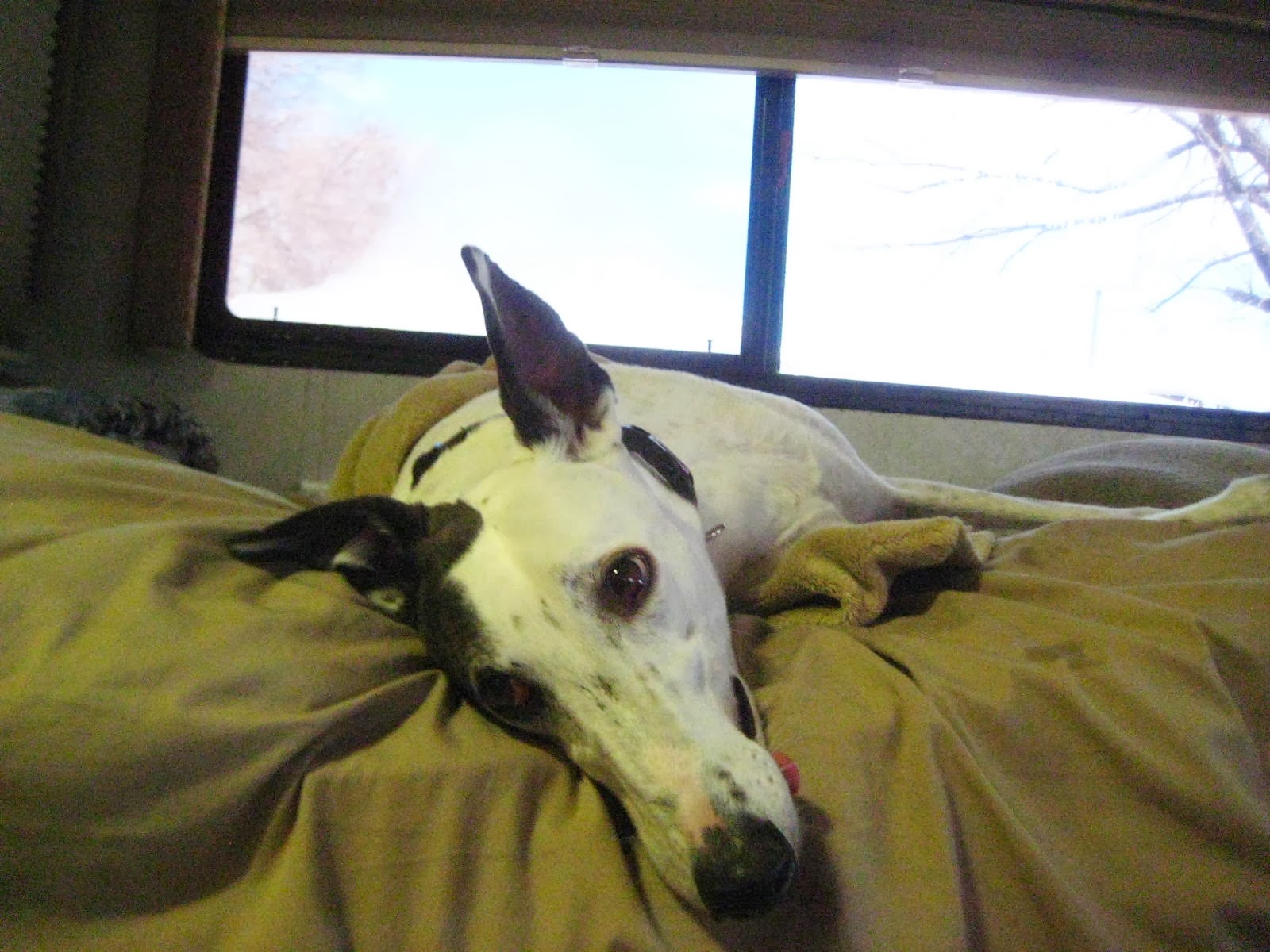 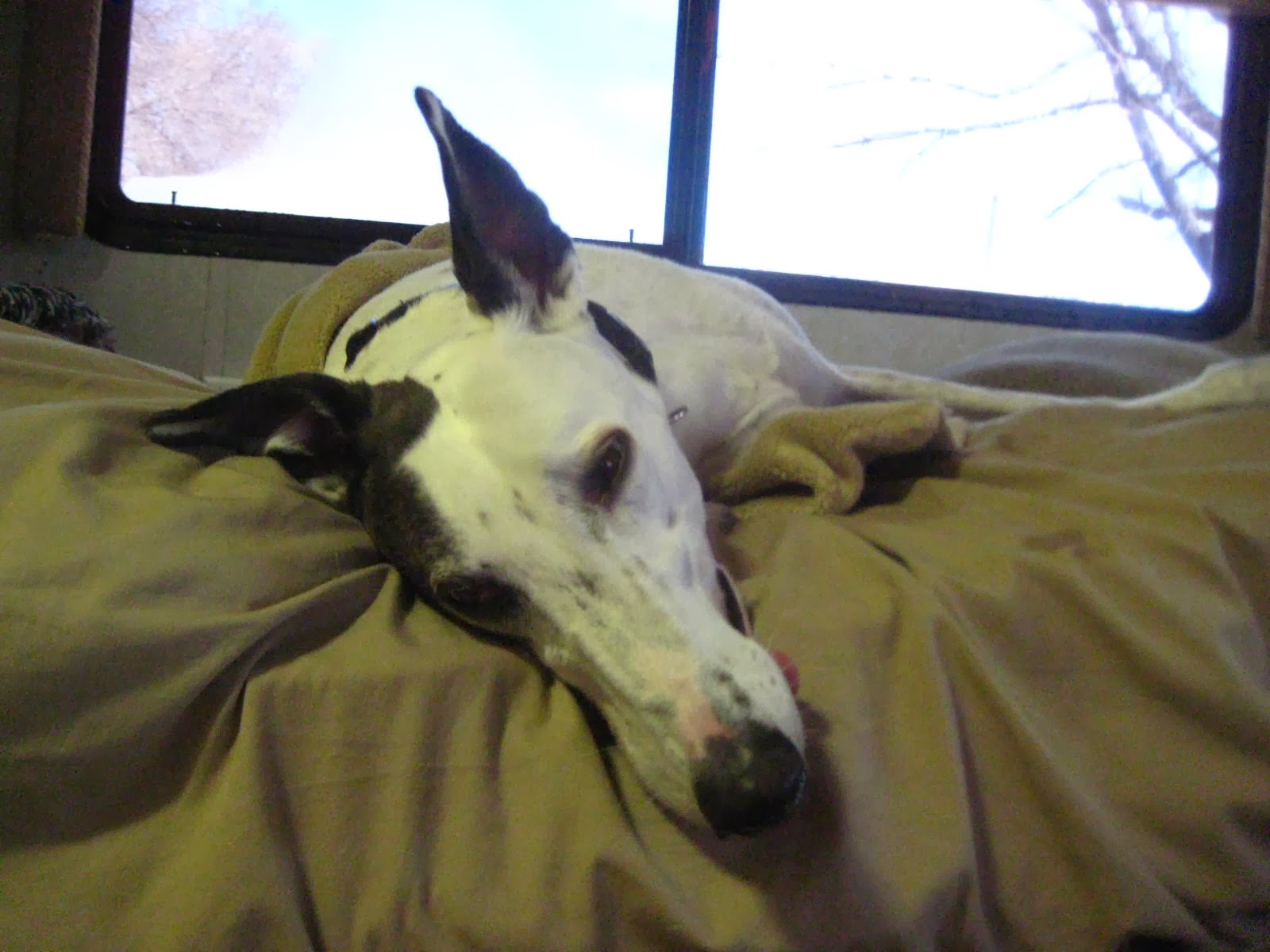 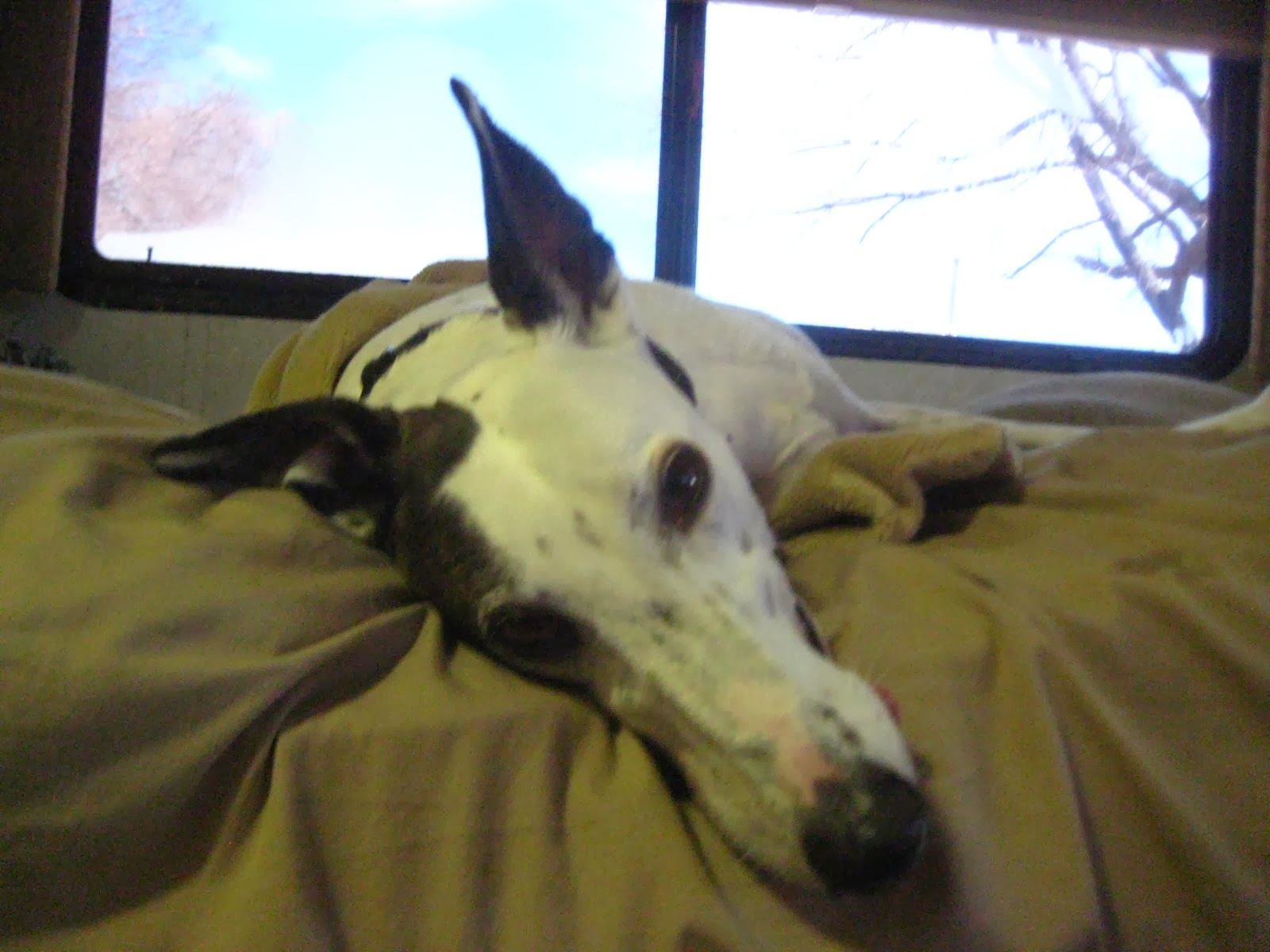 Joey,
The Greyhound Who Is Having One Of Those Days
at February 26, 2014 3 comments:

There are now four greyhounds here!  Miss Woe brought home a foster sister, Marie, last week. The first time I saw Marie, I really embarrassed Mama.  It was before 7 a.m. (quiet hours here) and I let out a howl and couldn't wait to get to her.  HUBBA HUBBA!

I have seen her almost every day since she arrived.  I no longer race to get to her or howl, but we always exchange pleasantries. She likes to kiss me.  We share a love of squirrel watching. Scout is not as taken with her as I am.  I think Scout is a little jealous of this cougar.  BOL! 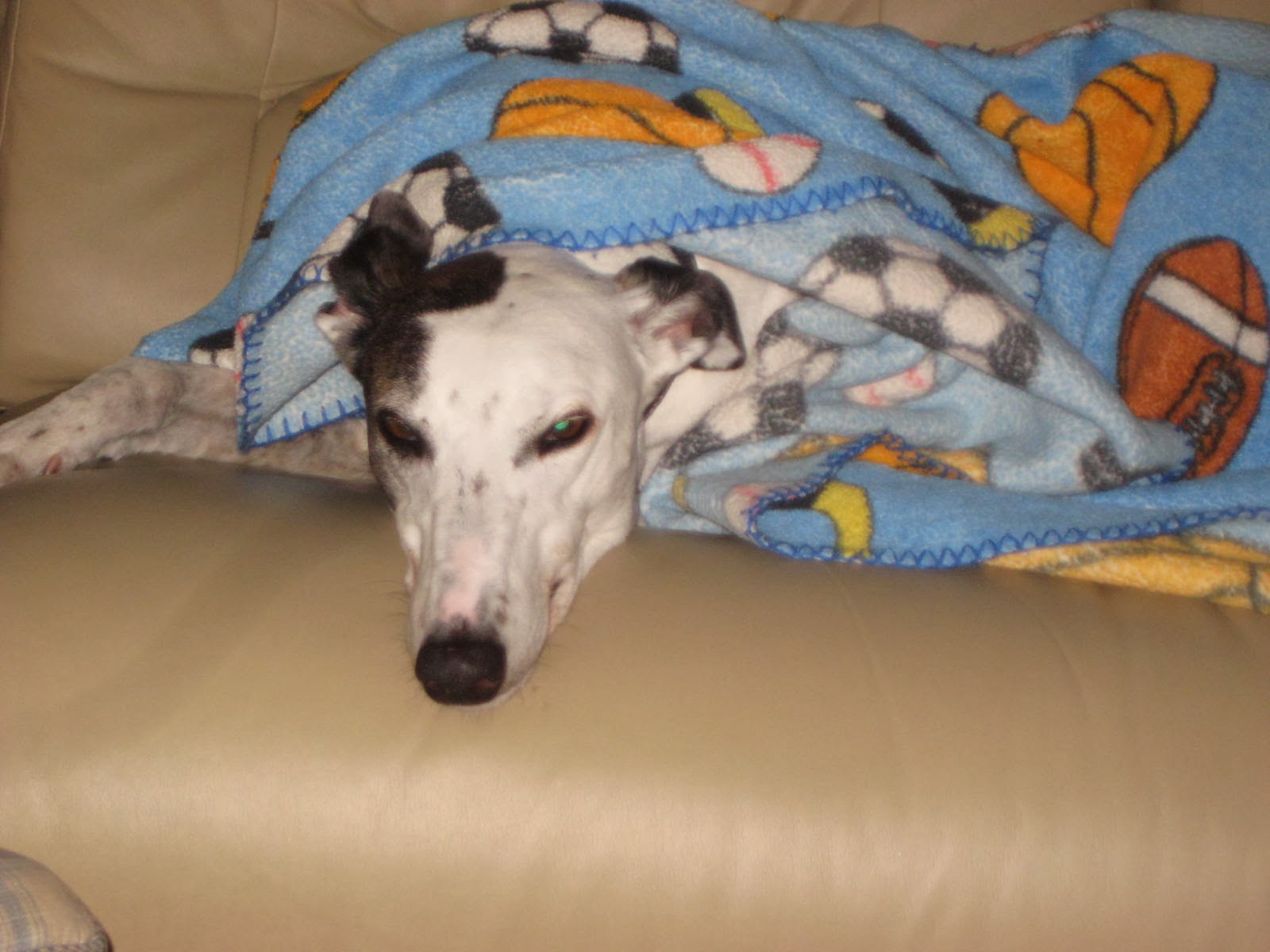 Joey,
The Greyhound Who Kissed A Girl  Cougar And Liked It
at February 25, 2014 4 comments:

Dad had a three day weekend.  He decided to take off last Friday instead of President's Day.  The RV show was in town and the folks wanted to go on Friday because it would be less crowded.  They started the day off by having breakfast at Cracker Barrel.  Mama said the bacon was delicious.  There was a sign that said it is being sold in supermarkets, so Mama is hoping to buy us some.

The RV show was better than the one in Houston, but not as good as the one in St. Louis.  They only had a few vendors.  Mama likes shopping for things for the RV and they just didn't have that.

After the RV show, they ate lunch at In & Out Burger. 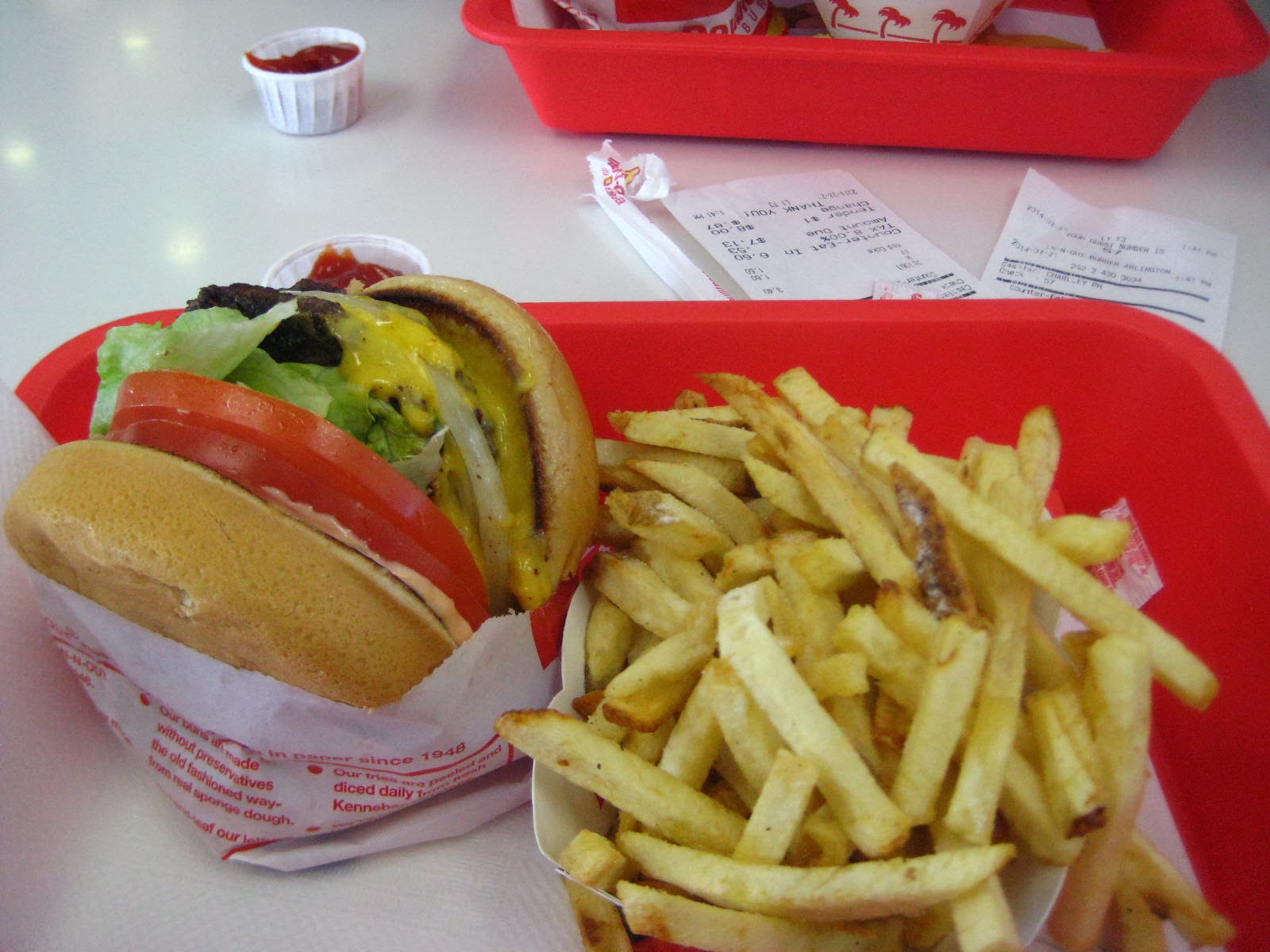 They went to a Chinese buffet for dinner.  Are you noticing a trend?  BOL!  Mama's birthday was on Sunday, so they ate out all weekend.

Saturday was an exciting day.  We got inspected!  Okay, we didn't get inspected, but the motor home and Jeep did. (State vehicle inspection that we have to do once a year.)  It was a big event because we had to pack up like we were actually going somewhere.  We only had to drive four miles to the inspection state.  Scout and I got a lot of attention from the employees and just people driving by.  Scout and I just stood in the parking lot and watched the action.  There was one of the big "man" balloons outside a store.  It had really long legs and arms. Scout was a little nervous about it, but it didn't hurt her.  The inspection didn't take long.  We then came back home and set everything up again.

We had Raising Cane's for lunch.  It is a chicken place.  The folks had Mexican for dinner.  It was okay.


Mama got mail on Saturday and she was upset to see that she had a summons to be a juror.  It said she needed to be there today.  YIKES!  She worried about it all weekend. She called this morning and told them she was not in the area and that she was a full-time RVer. They excused her.  She had heard it wouldn't be a problem, but she still worried about it.

Yesterday was Mama's birthday and our one year anniversary of buying this motor home.   The folks thought they would be home with us, but they needed to find boots and gloves for Mama's scooter class that she is taking next weekend.  They also needed to check out the location and drove all over since the first location was too far away.  She is going to be gone all day on Saturday and Sunday.  We are a little nervous about that, but Mama said she will leave notes for Dad on how to care for us. BOL! 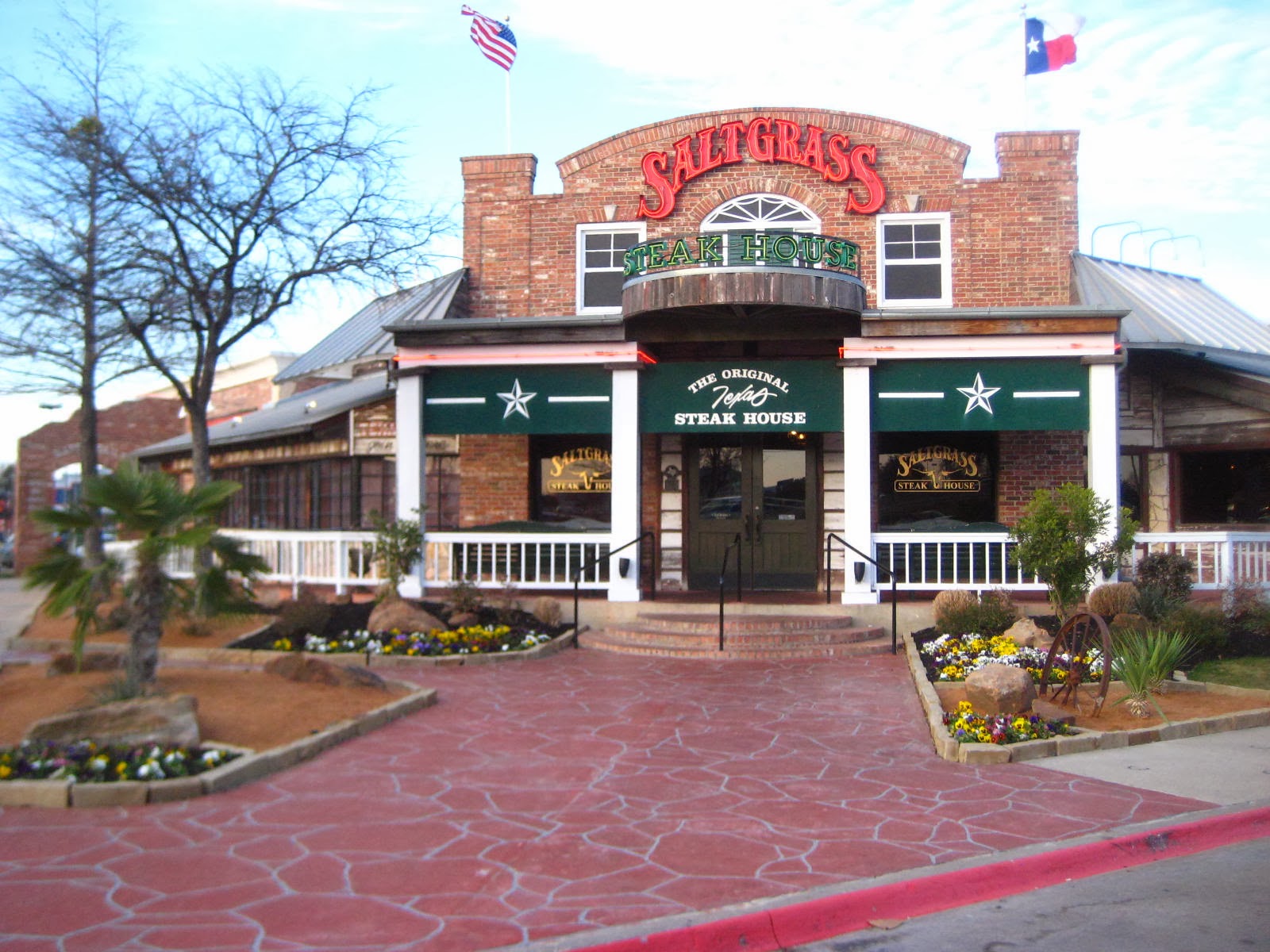 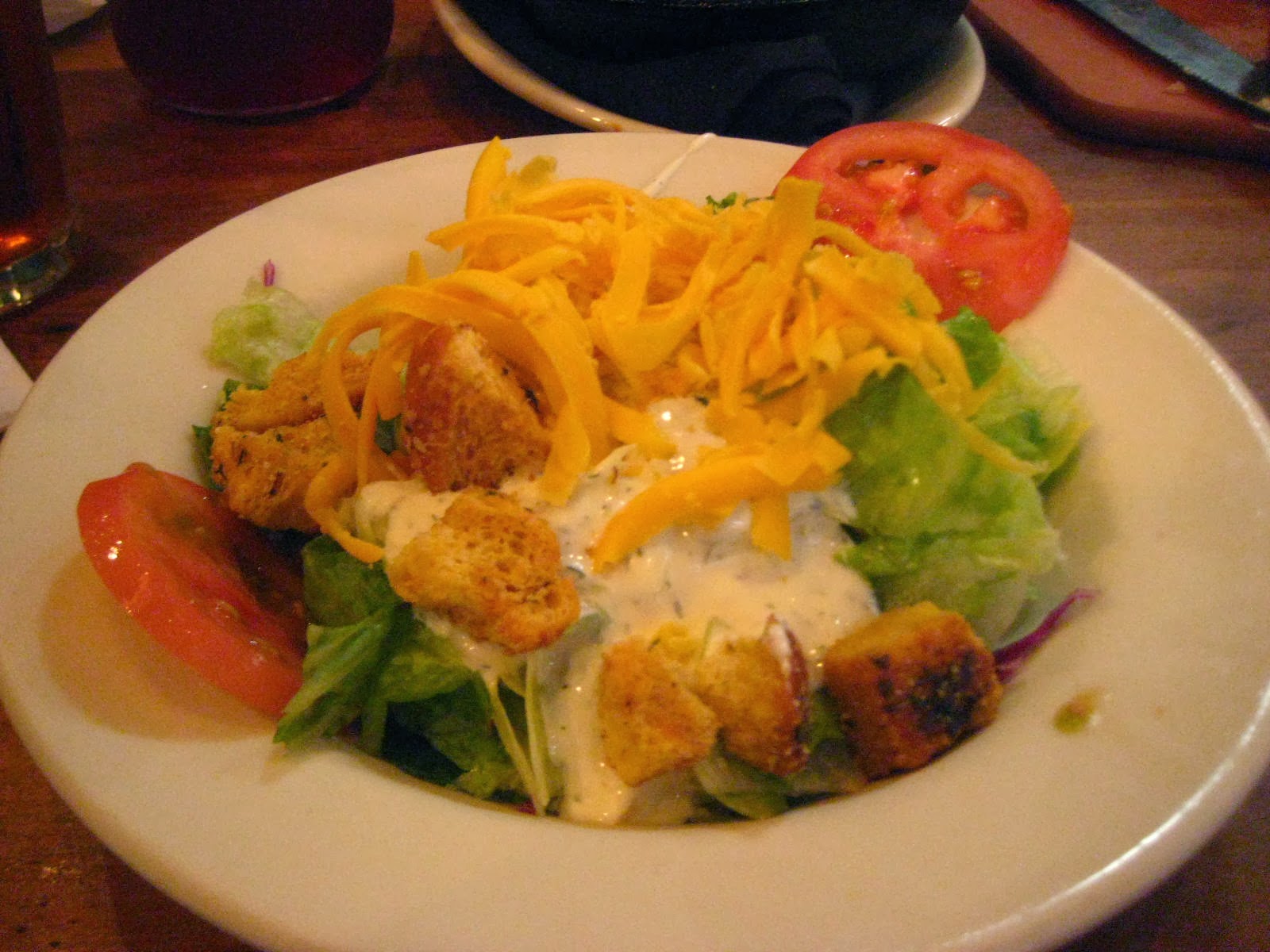 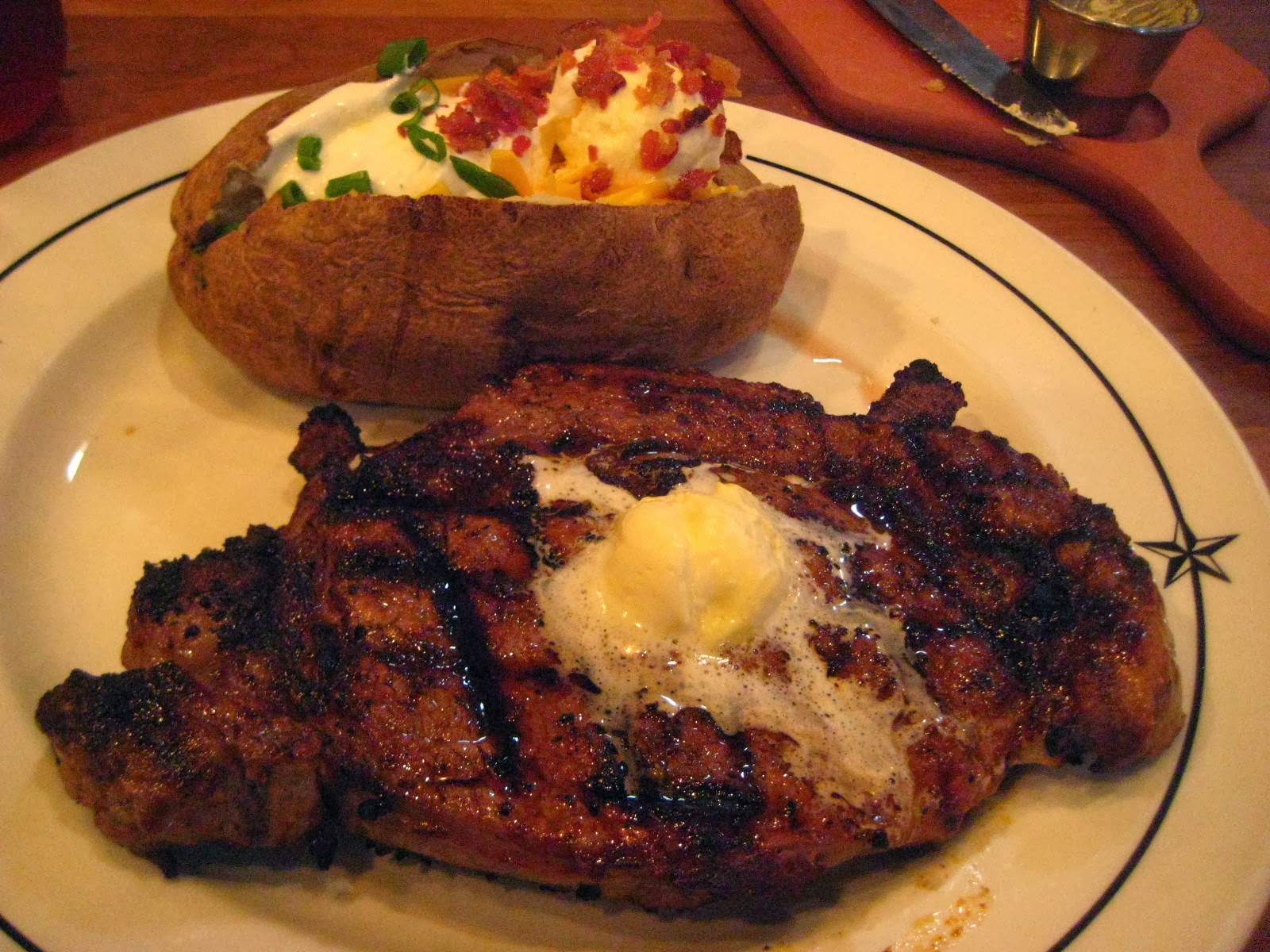 We know the steak was good because we had some.  YUM!

The weekend flew by and we can't believe it was three days long.

Joey,
The Greyhound Who Is Always Tired On Mondays
at February 24, 2014 4 comments:

Does Anyone Know Why Mama Cleans?

Does anyone know why Mama cleans?  She doesn't know because every time she cleans she says "I don't know why I am doing this because it is going to be dirty in half an hour."  It seems like a total waste of time.

Today, she vacuumed, which we hate.  Then, she took it one step further and mopped the floors.  I really hate that.

Watching the floor dry made me really thirsty. As soon as the throw rugs were put back down, I got a drink. Dribble, dribble, dribble on the wood floor. Then, I needed something to eat. I like to take my kibble to the carpet. Crunch, crunch, crunch. Then, I threw up.

It really does seem like Mama wastes her time cleaning.

Joey,
The Greyhound Who Thinks Cleaning Is A Waste Of Time
at February 21, 2014 4 comments:

The folks visited Fort Worth on Saturday.  Dad wanted to visit Billy Bob's which is the "world's largest honky-tonk".  There is a $2 cover charge any time that you visit.  Mama didn't know what to expect, but she thought it would have a nice restaurant.  BOL!  It is a honky-tonk, Mama.

After you pay your cover charge, you enter a hallway with hand prints. The hand prints belong to celebrities.  Most of the hand prints are from country singers, but there are some rock stars as well.

There is a small restaurant area and that area has hamburger buns signed by stars. 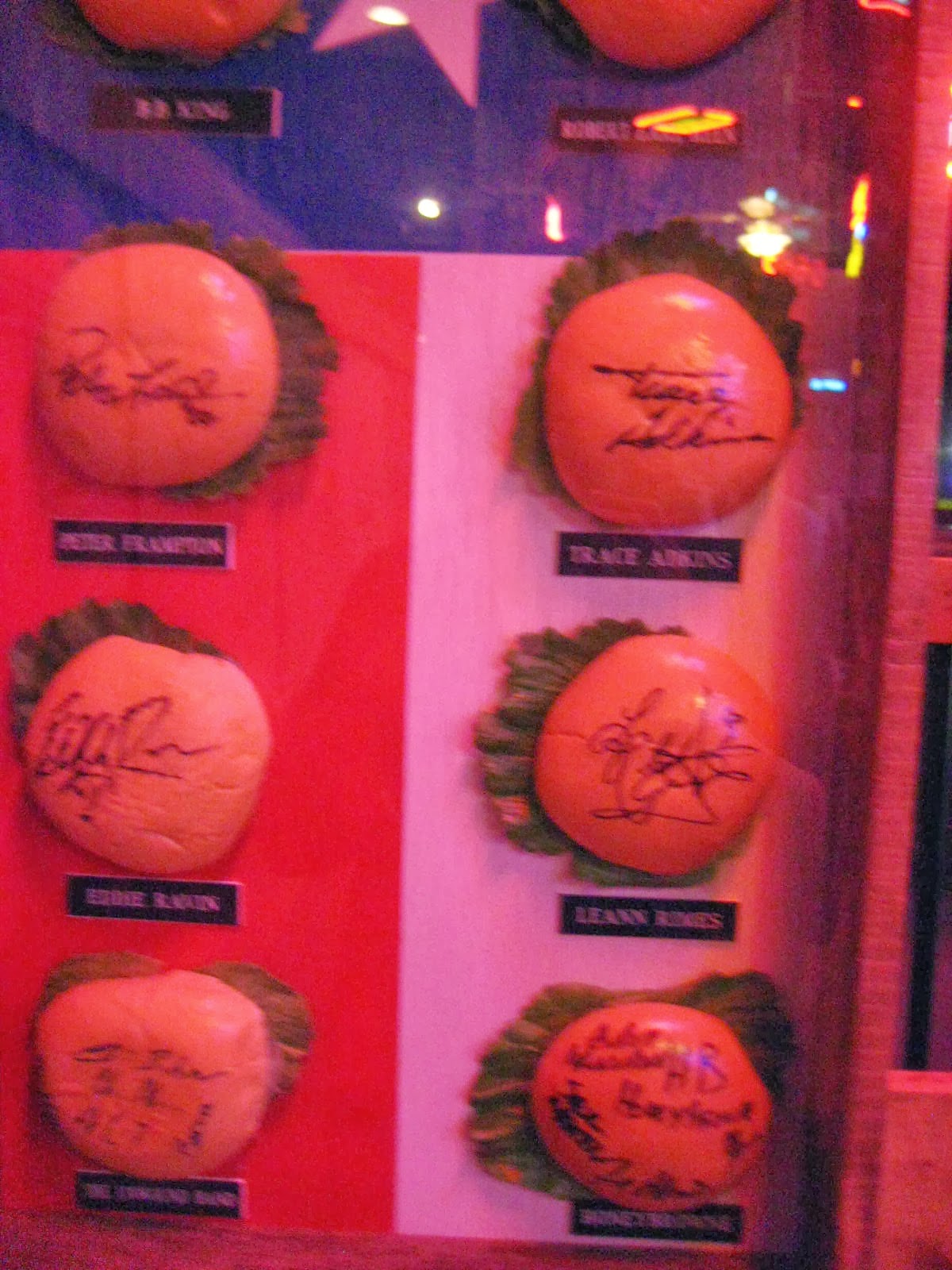 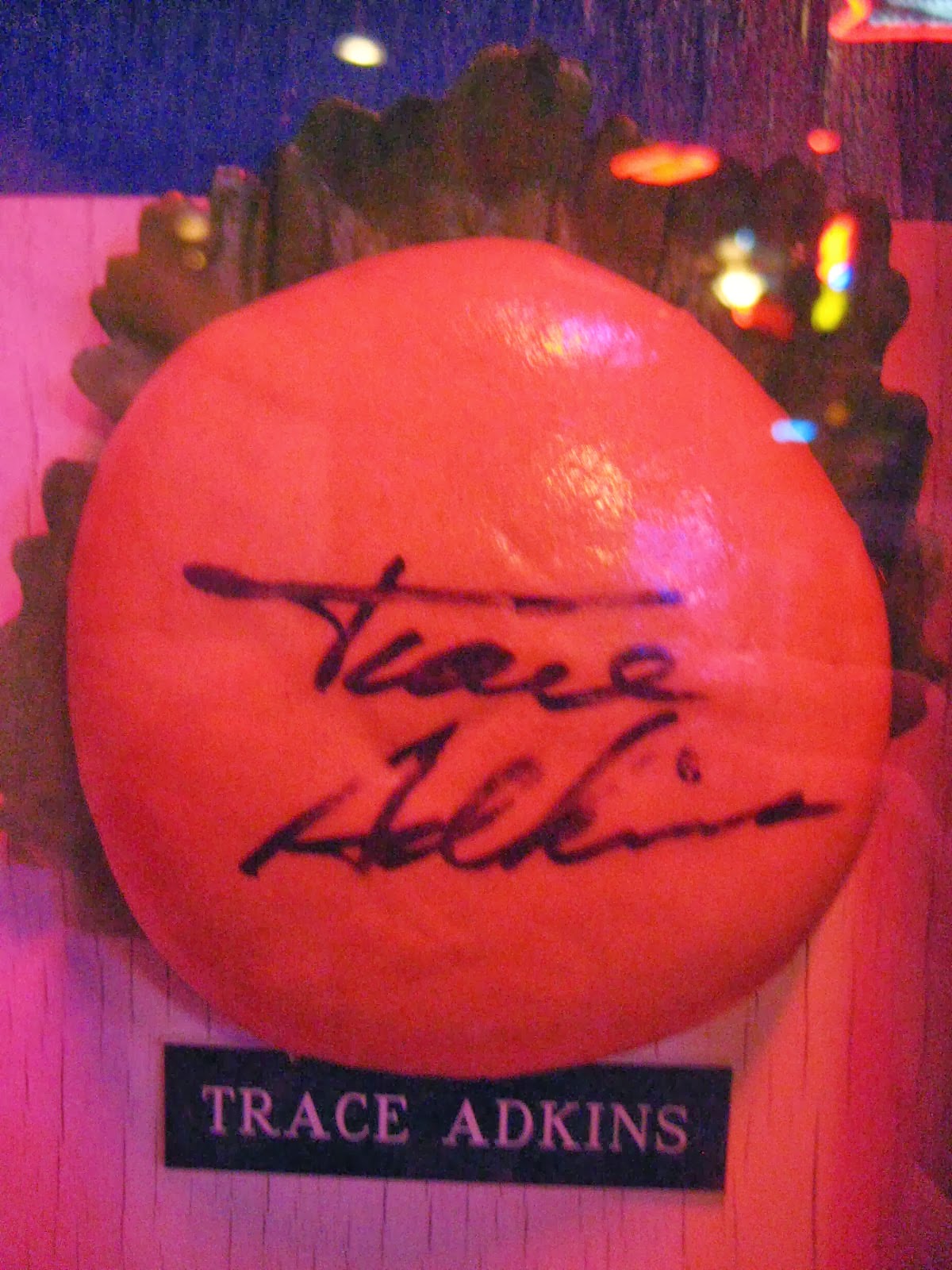 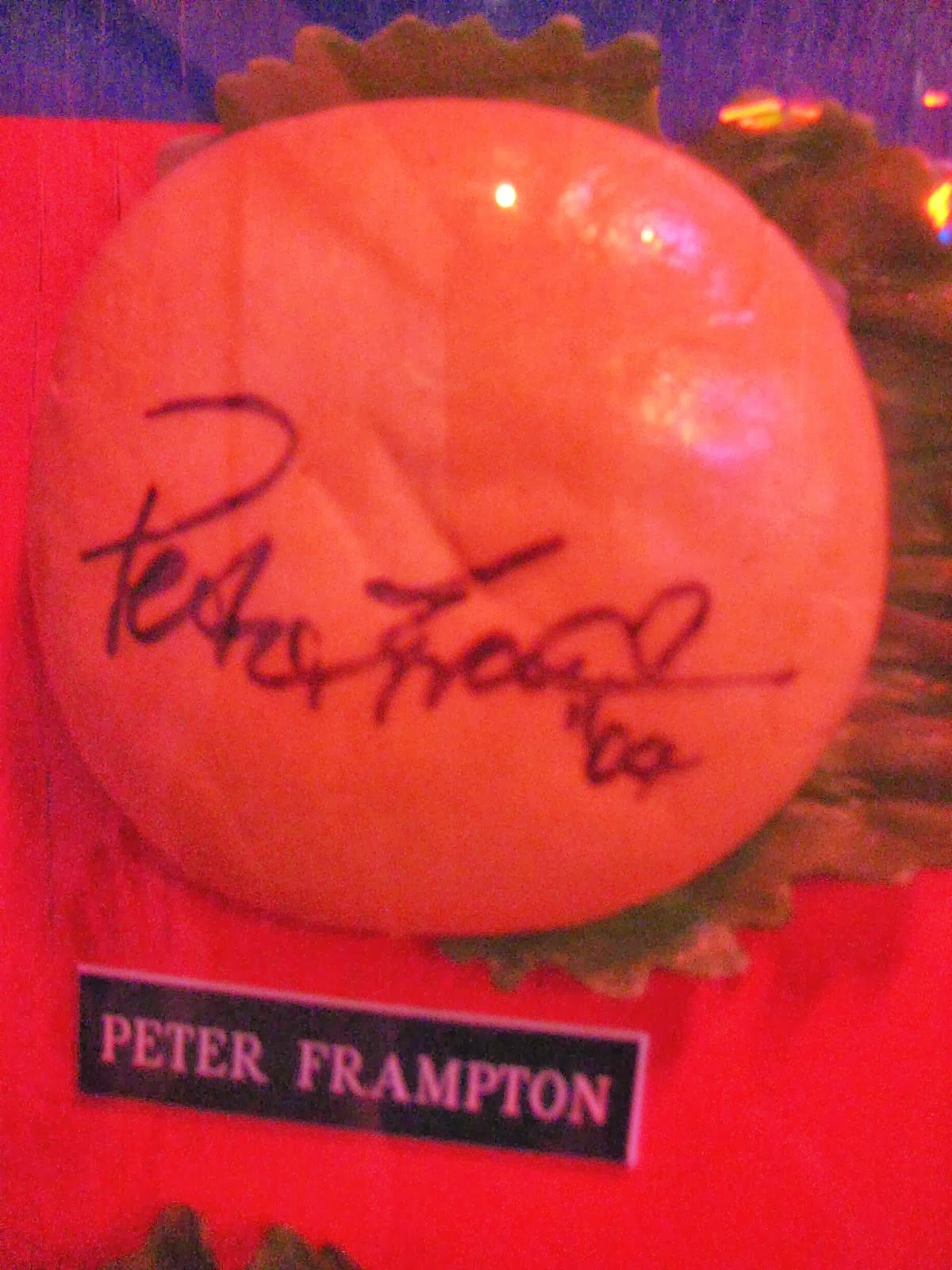 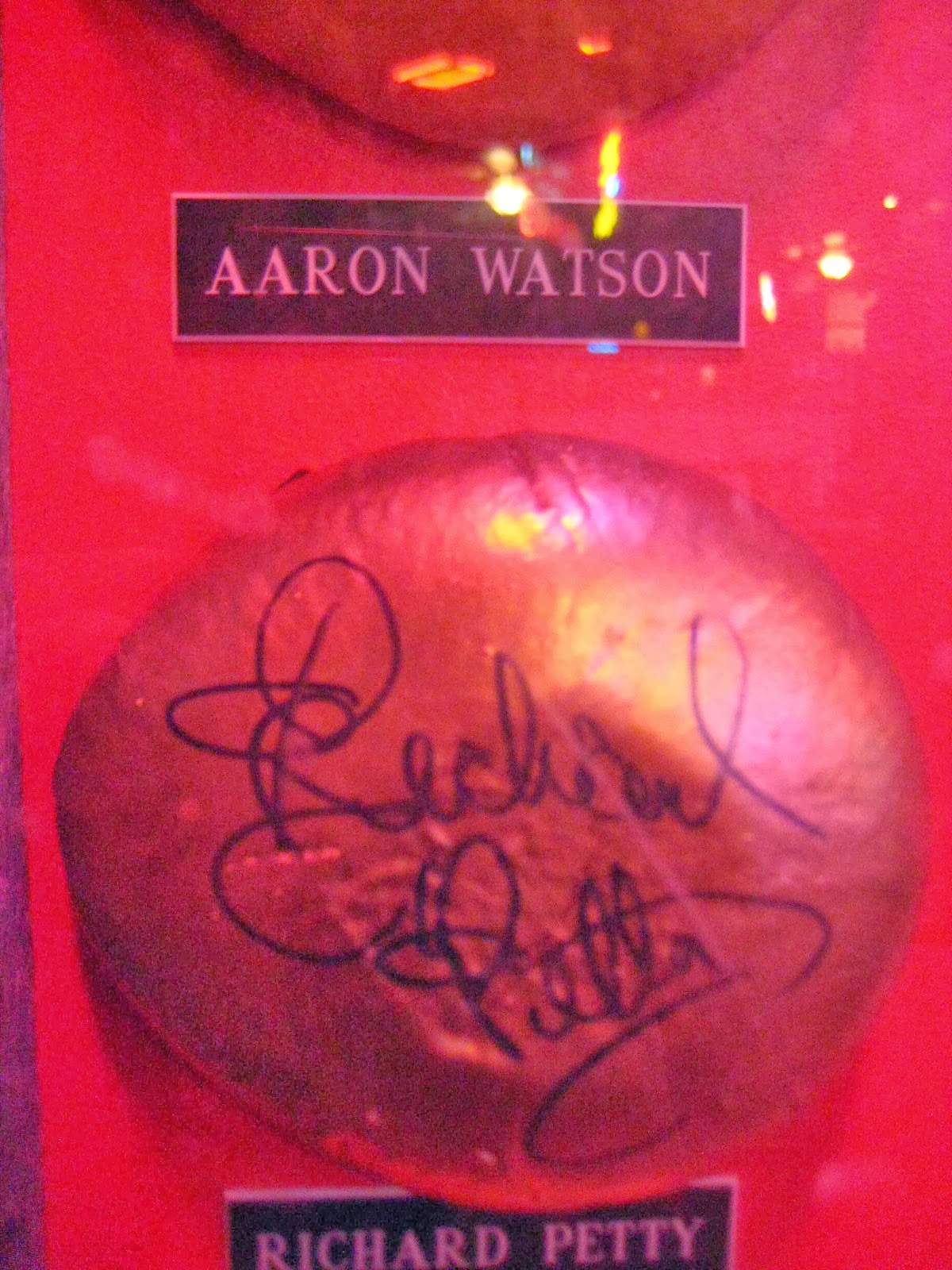 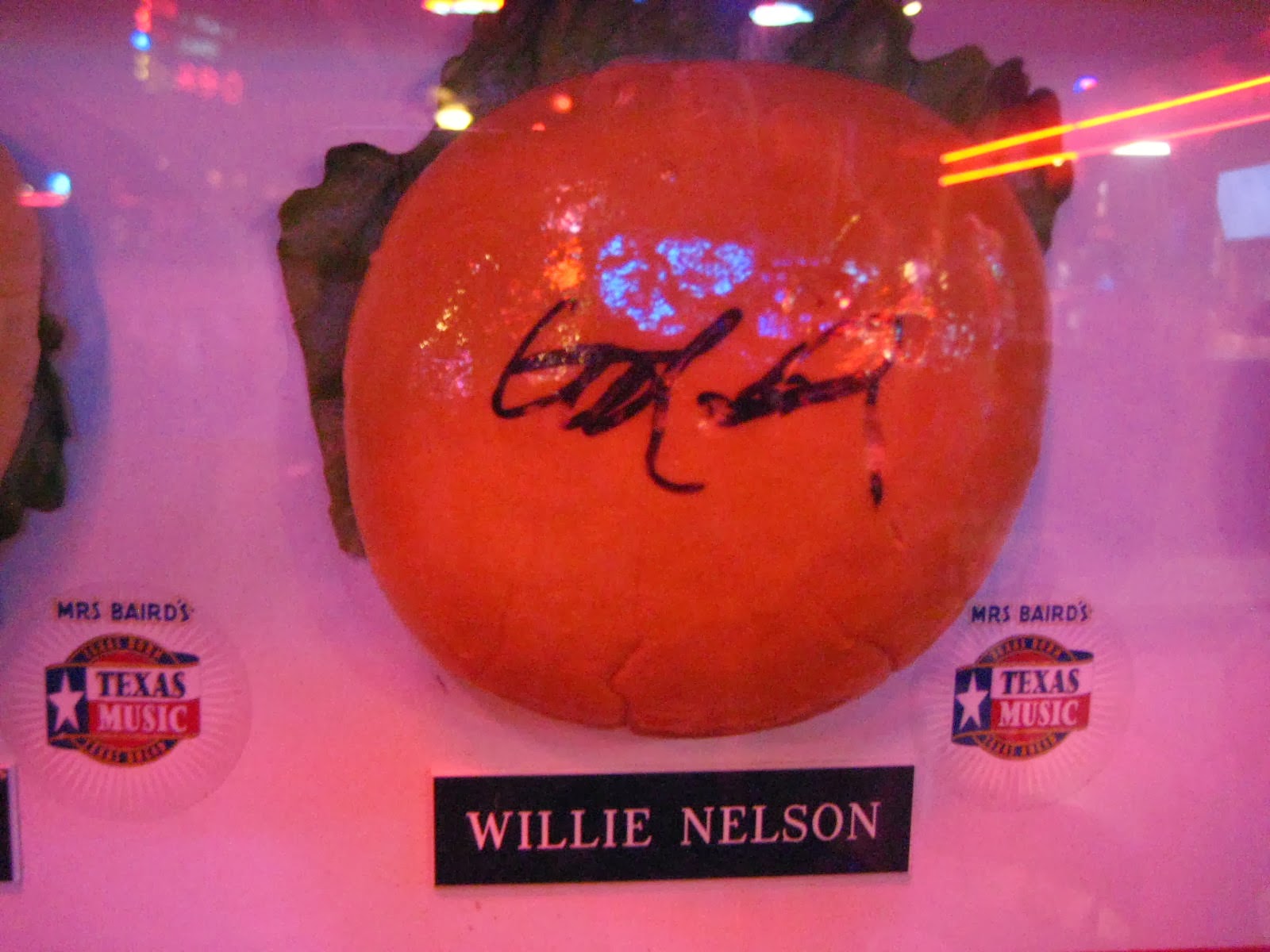 Mama ordered a chicken fried steak sandwich and fries.  The sandwich came plain, no gravy.  It was good though. 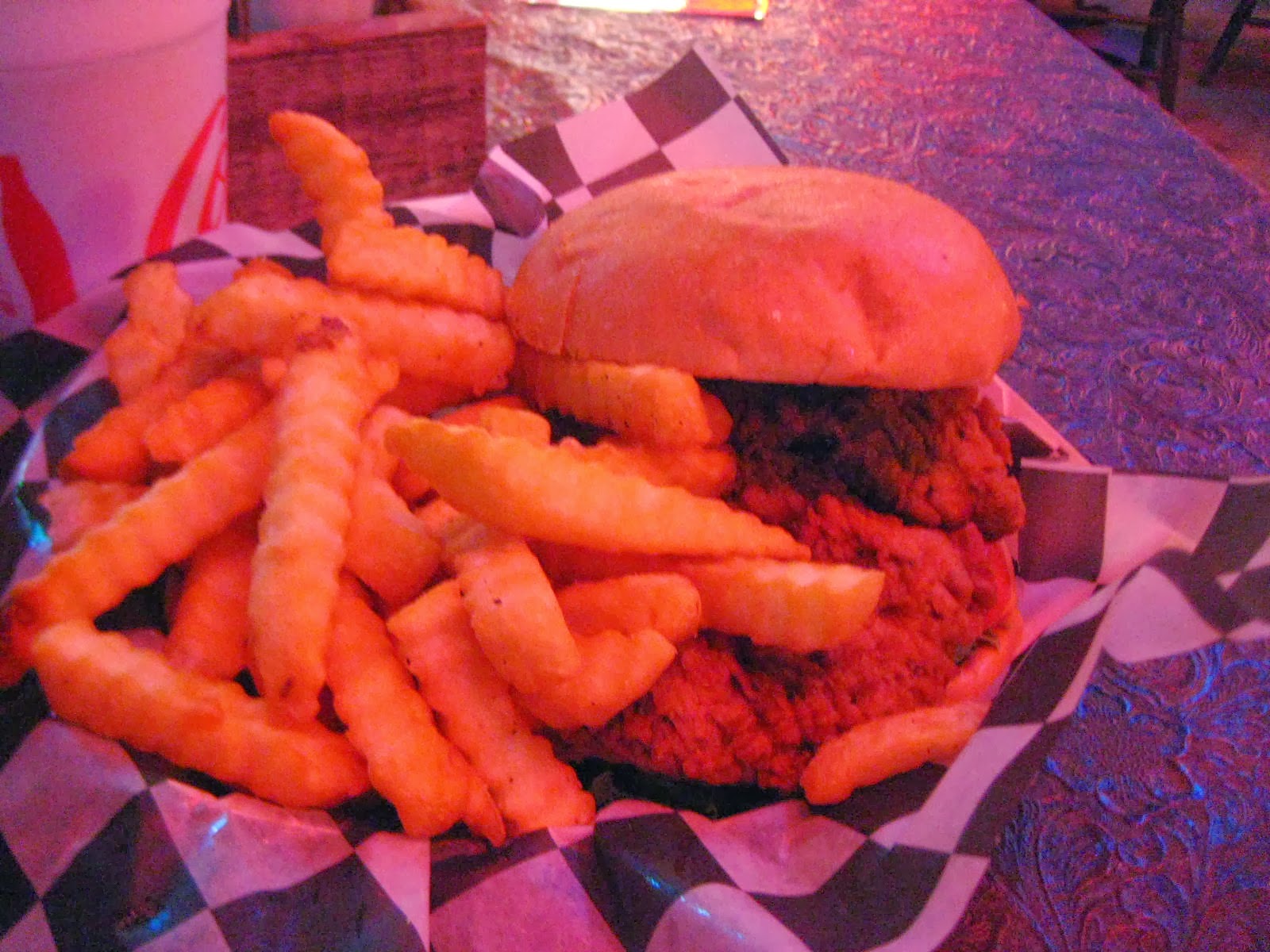 The fried pickles were really good.   She kept asking Dad what kind of pickles he thought they were because they were so good. 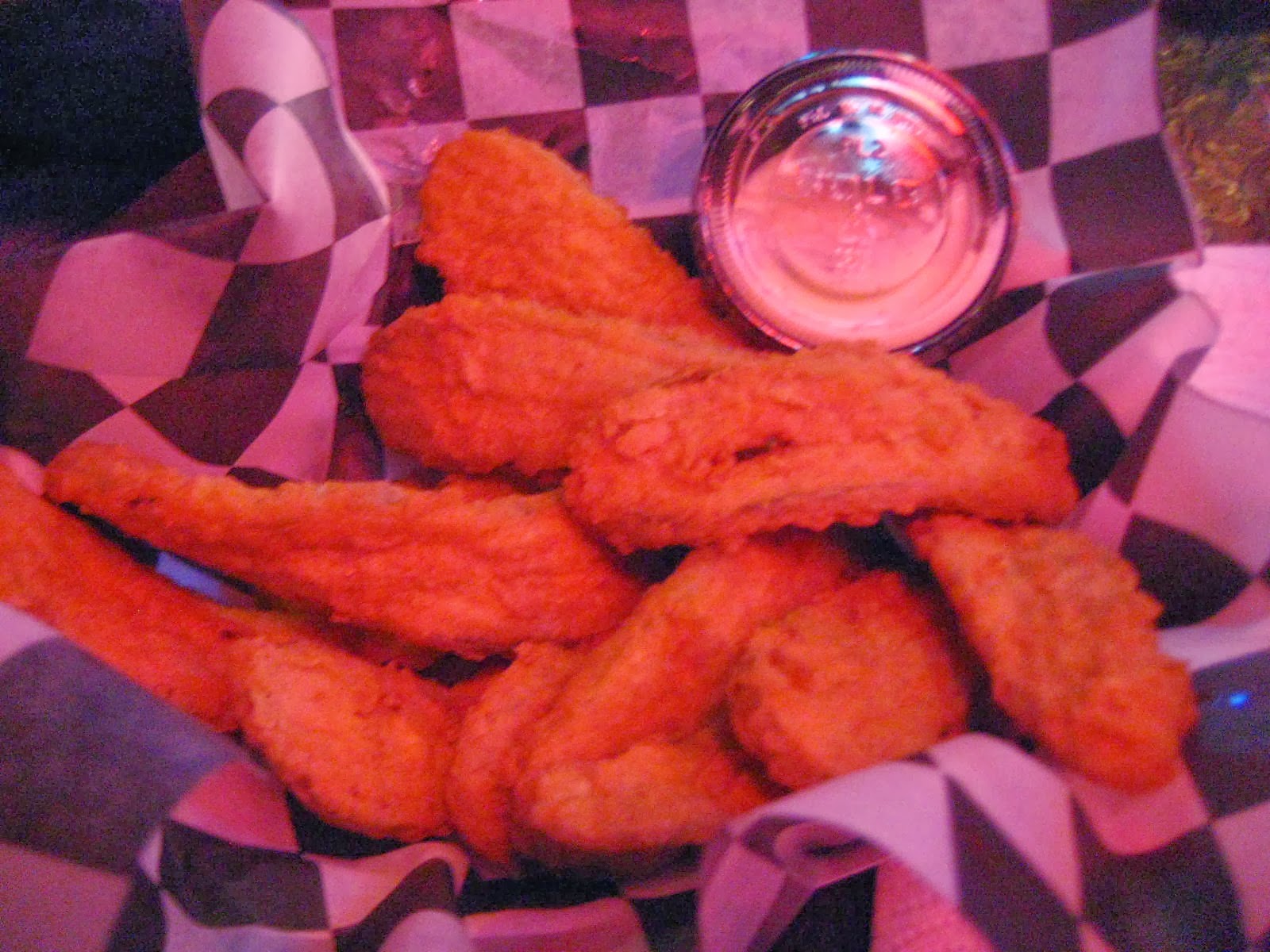 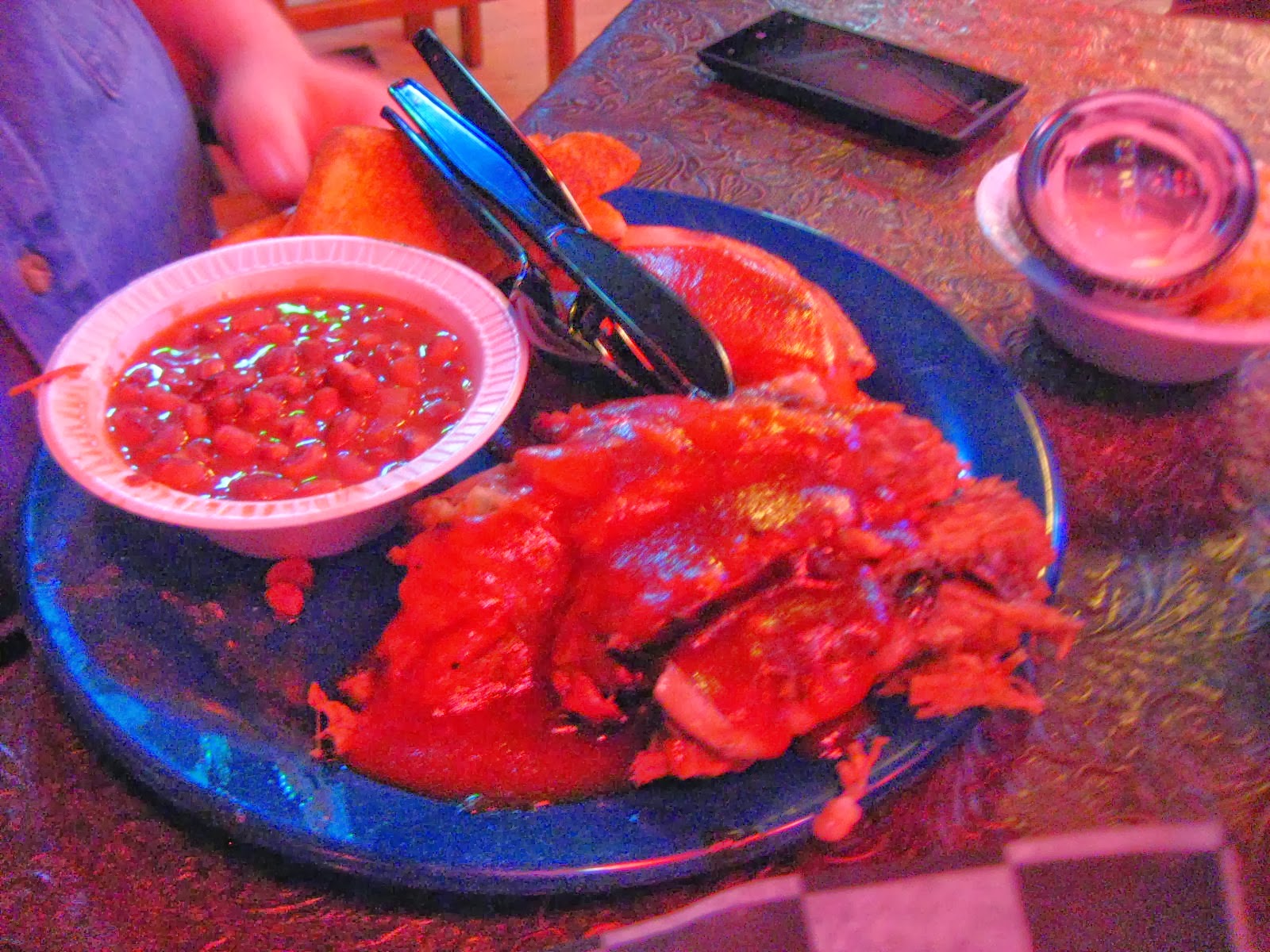 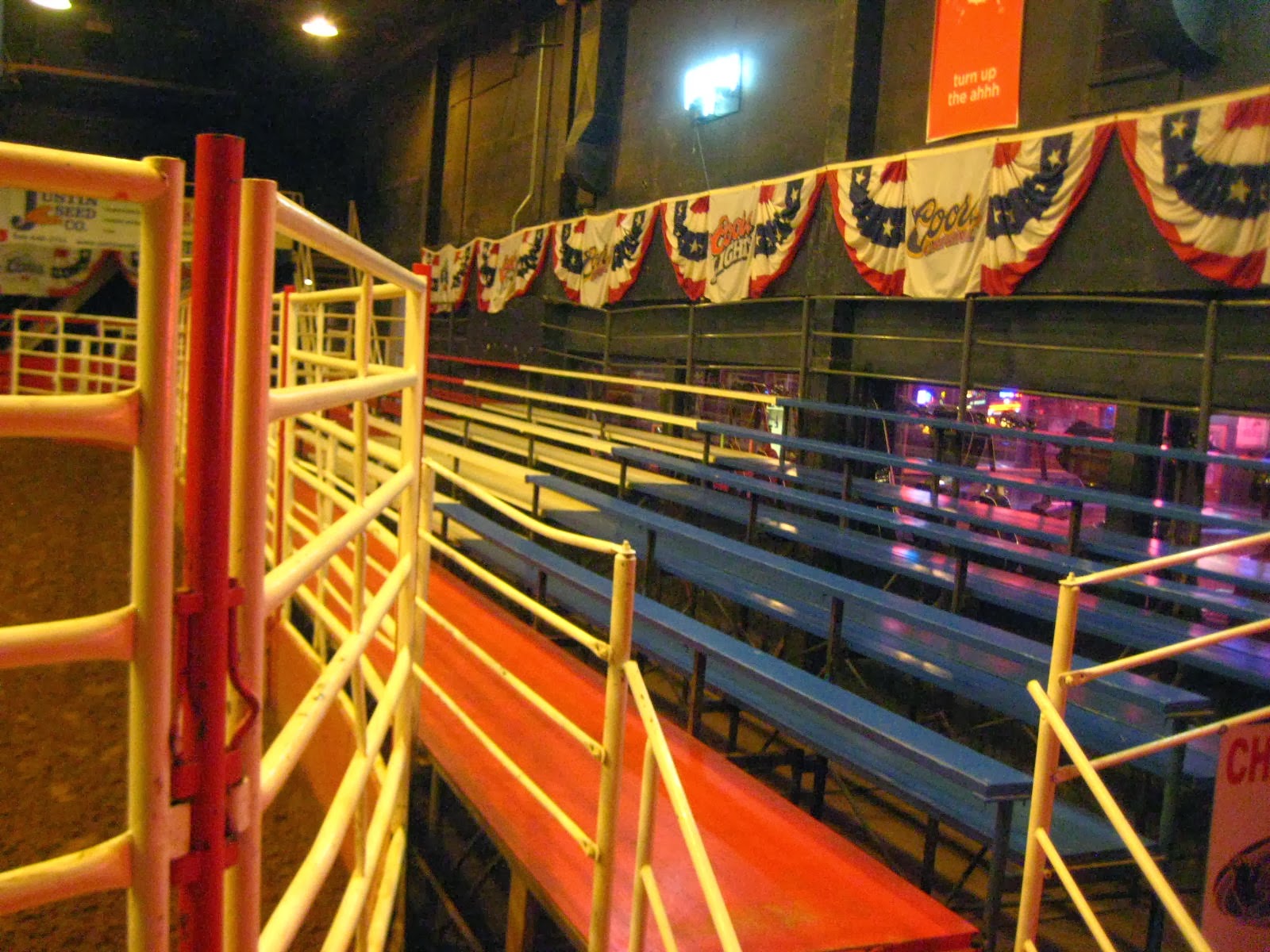 Mama said it was interesting to see Billy Bob's.  She wouldn't want to be there at night when everyone is partying.  The place smelled of smoke when it was empty, so when it is full of people it is probably really bad.  Yep, it is one of the few places where people are still allowed to smoke.

Joey,
The Greyhound Who Thinks Honky-Tonk Is Funny To Say
at February 20, 2014 3 comments: 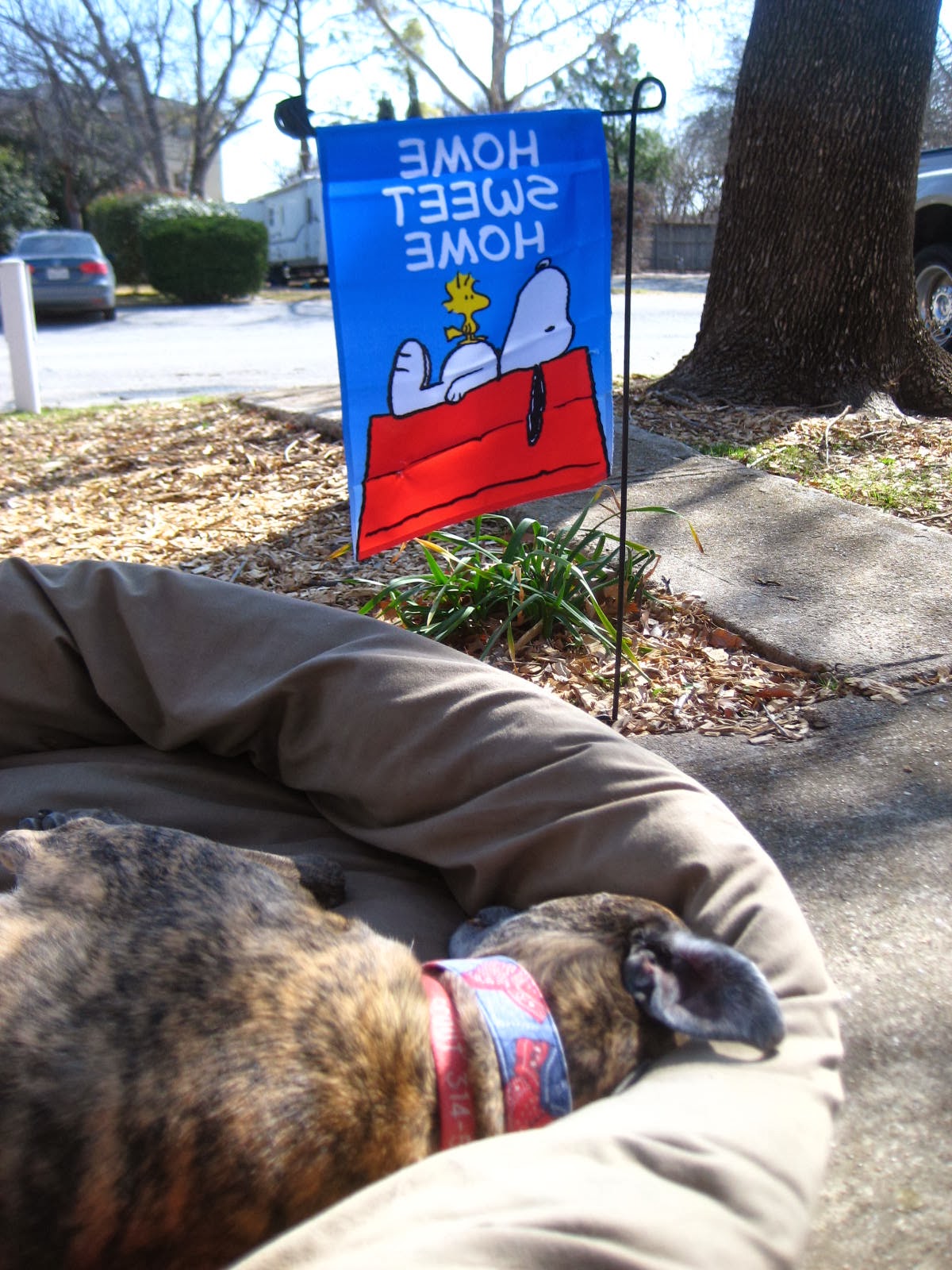 Joey and Scout
The Greyhounds Who Know Home Is Wherever The Motor Home Is Parked
at February 19, 2014 2 comments:

A Day At The Stockyards In Fort Worth

The folks drove to Fort Worth to visit the Stockyards.  I thought that sounded like a strange way to spend the day, but Mama said there would be a lot to do there.  Actually, Mama was quite surprised by the number of people that were there. 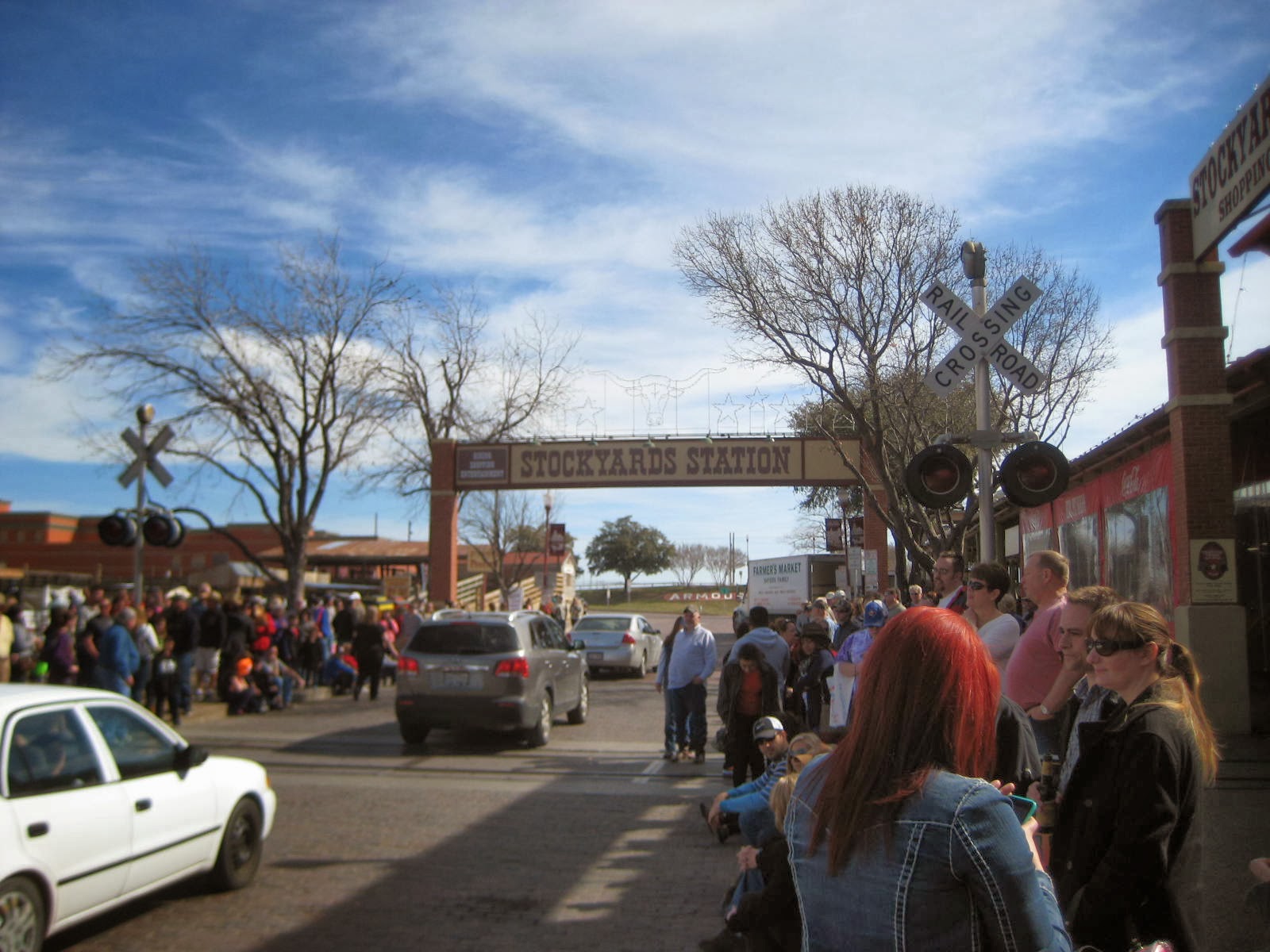 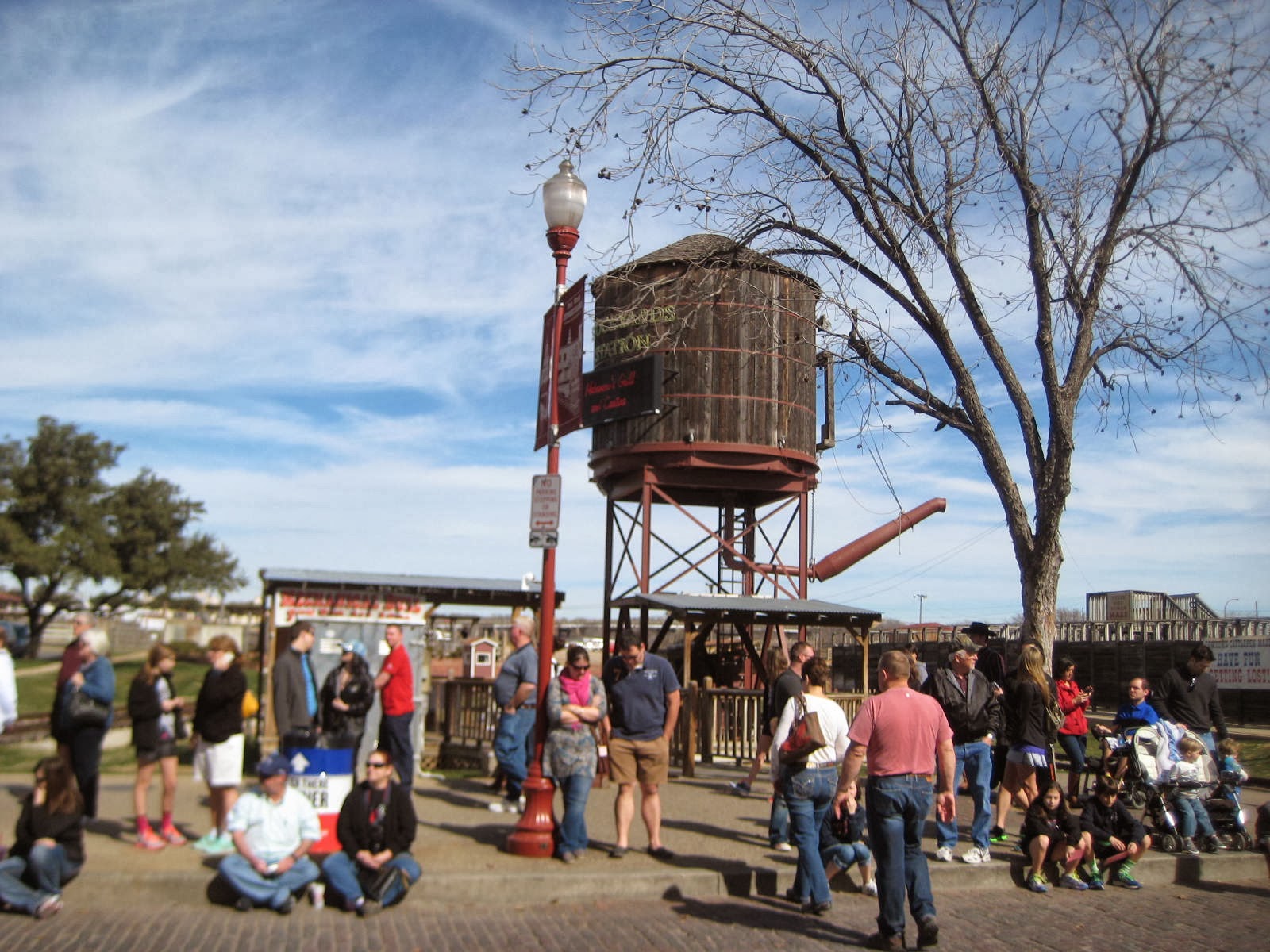 There is a maze that people can walk through.  It was on The Amazing Race. 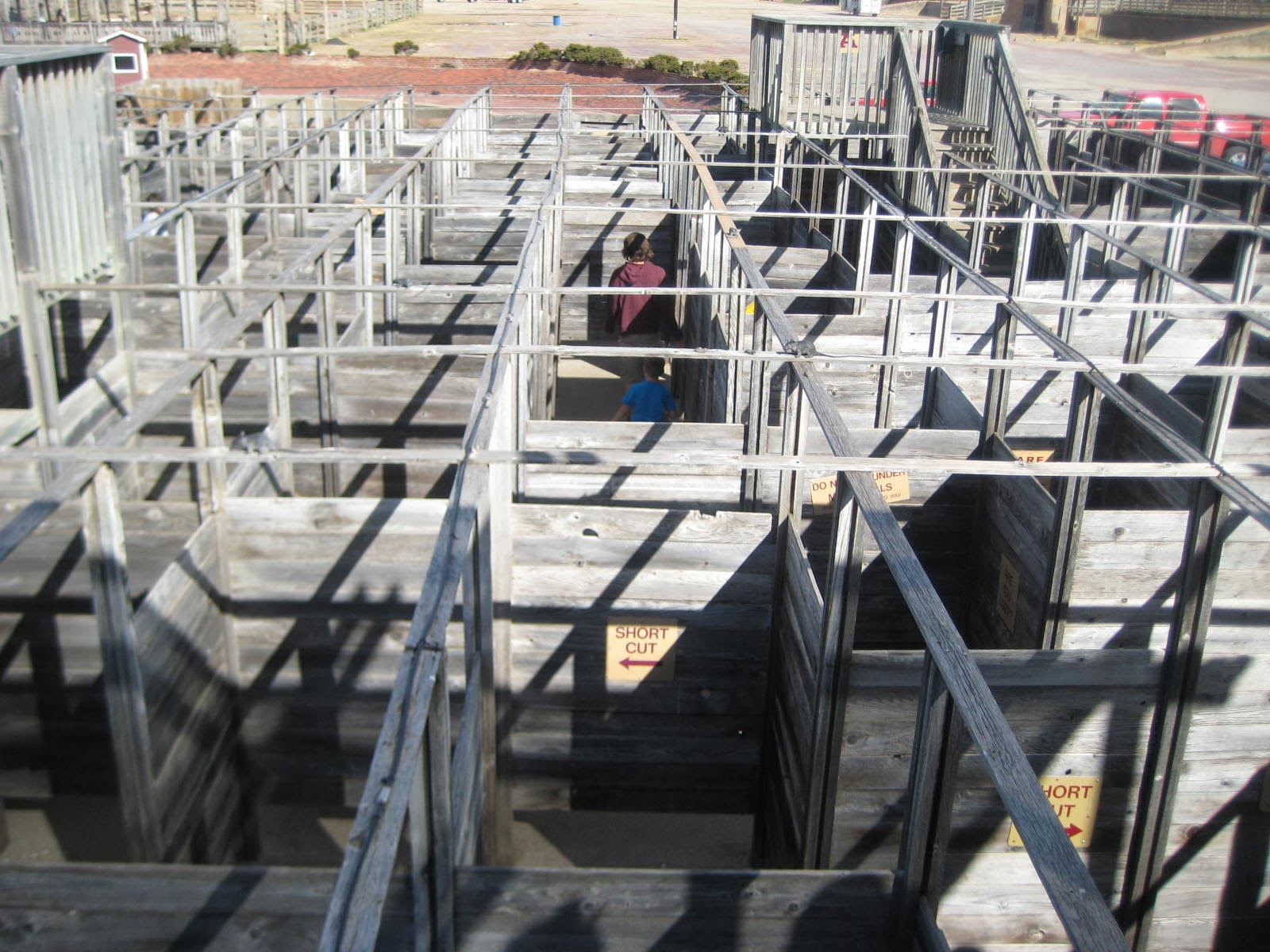 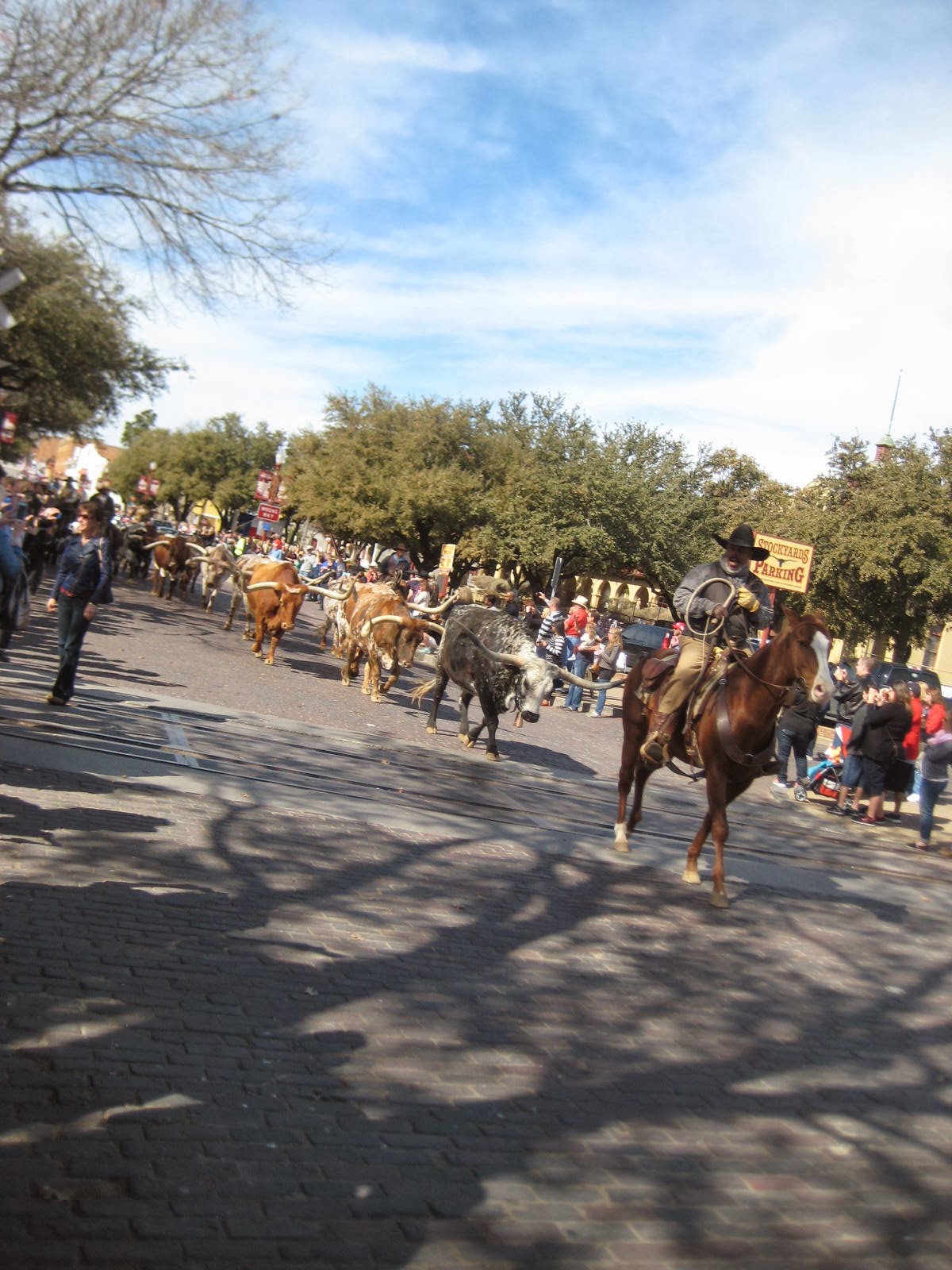 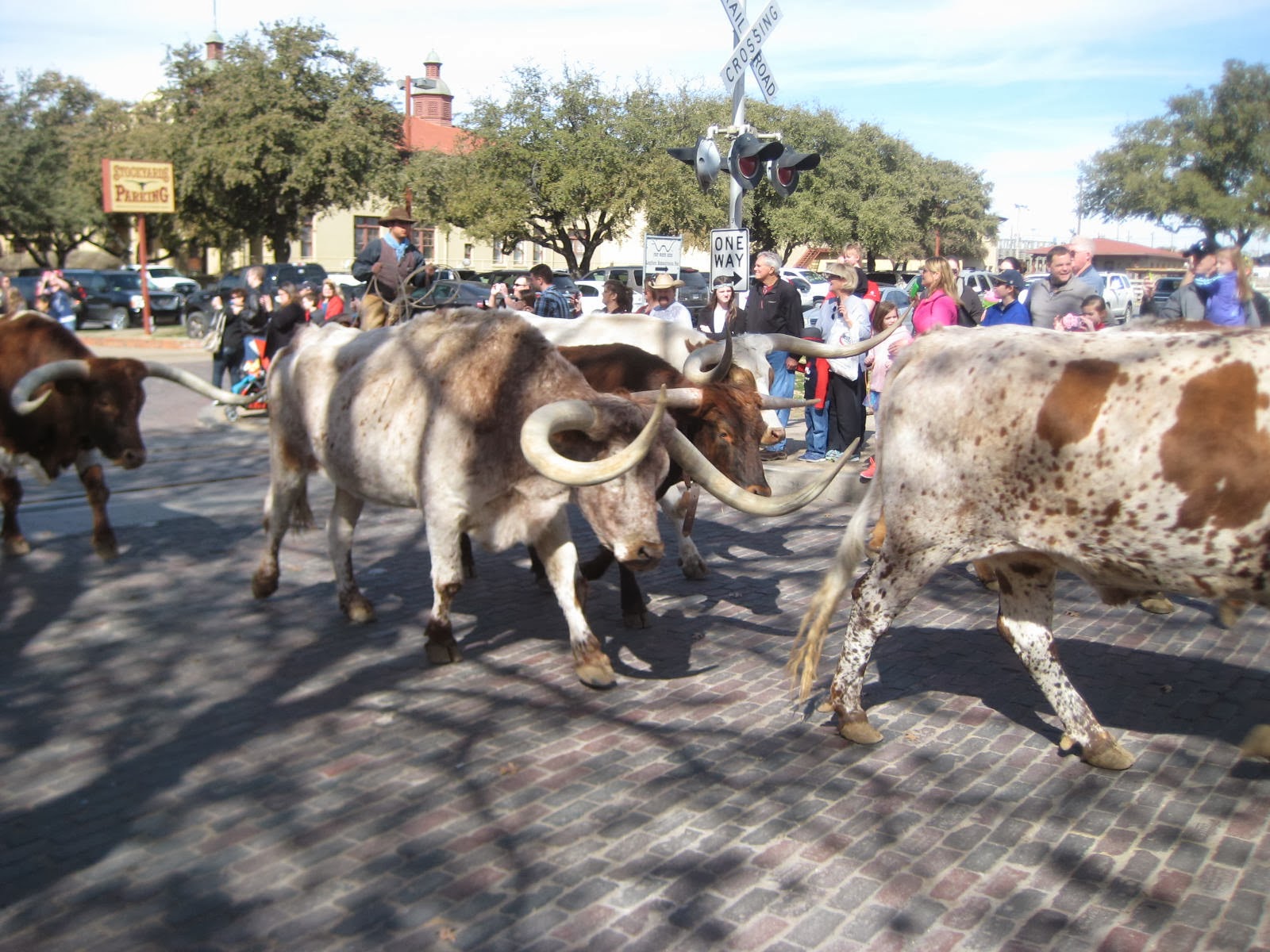 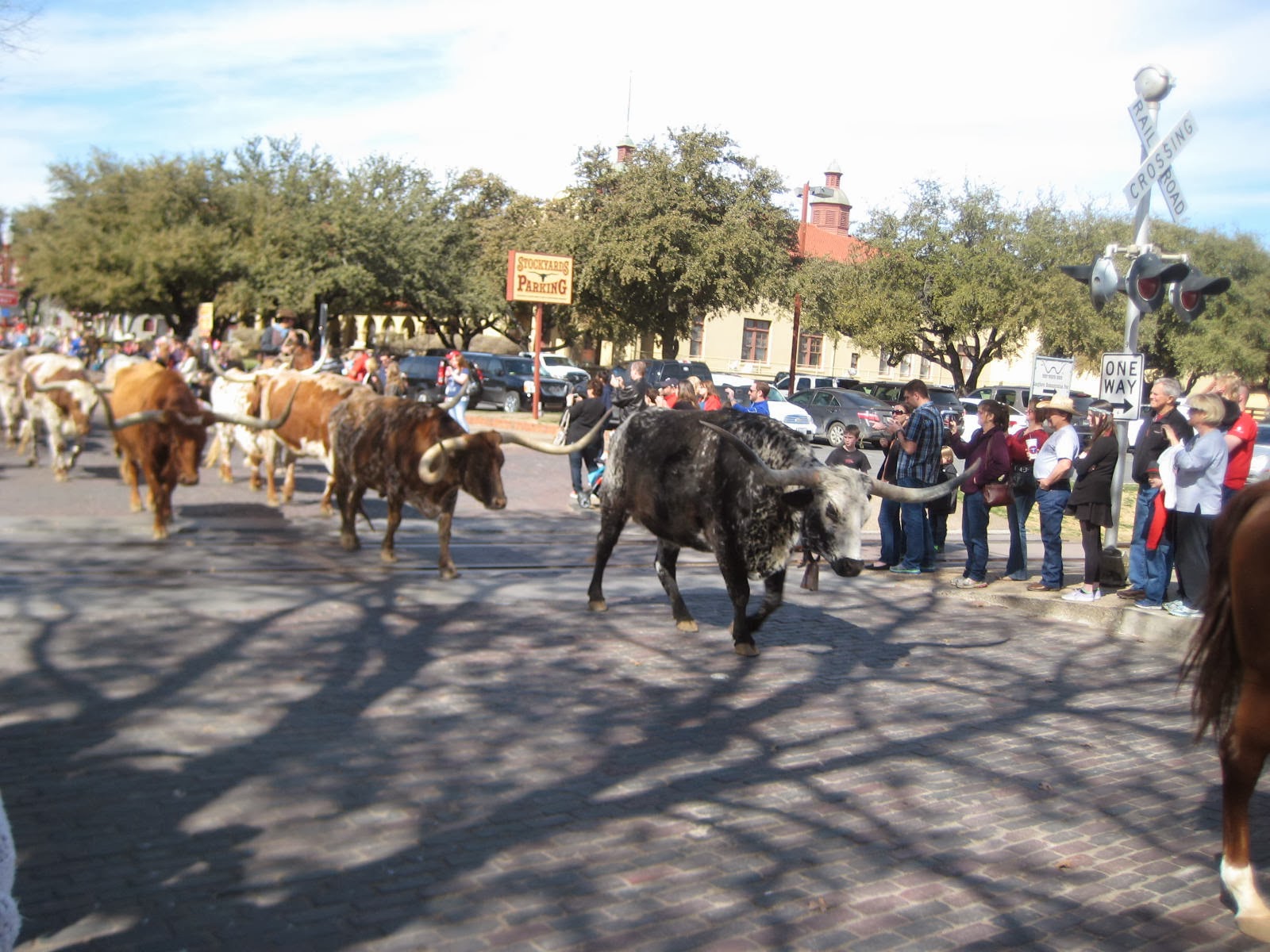 Yep, they come right down the street.

After the cattle drive, the Legends of Texas put on a gunfight.  Mama said the gunshots were so loud that it really hurt her hears.  It is held in an enclosed area and it echoed. 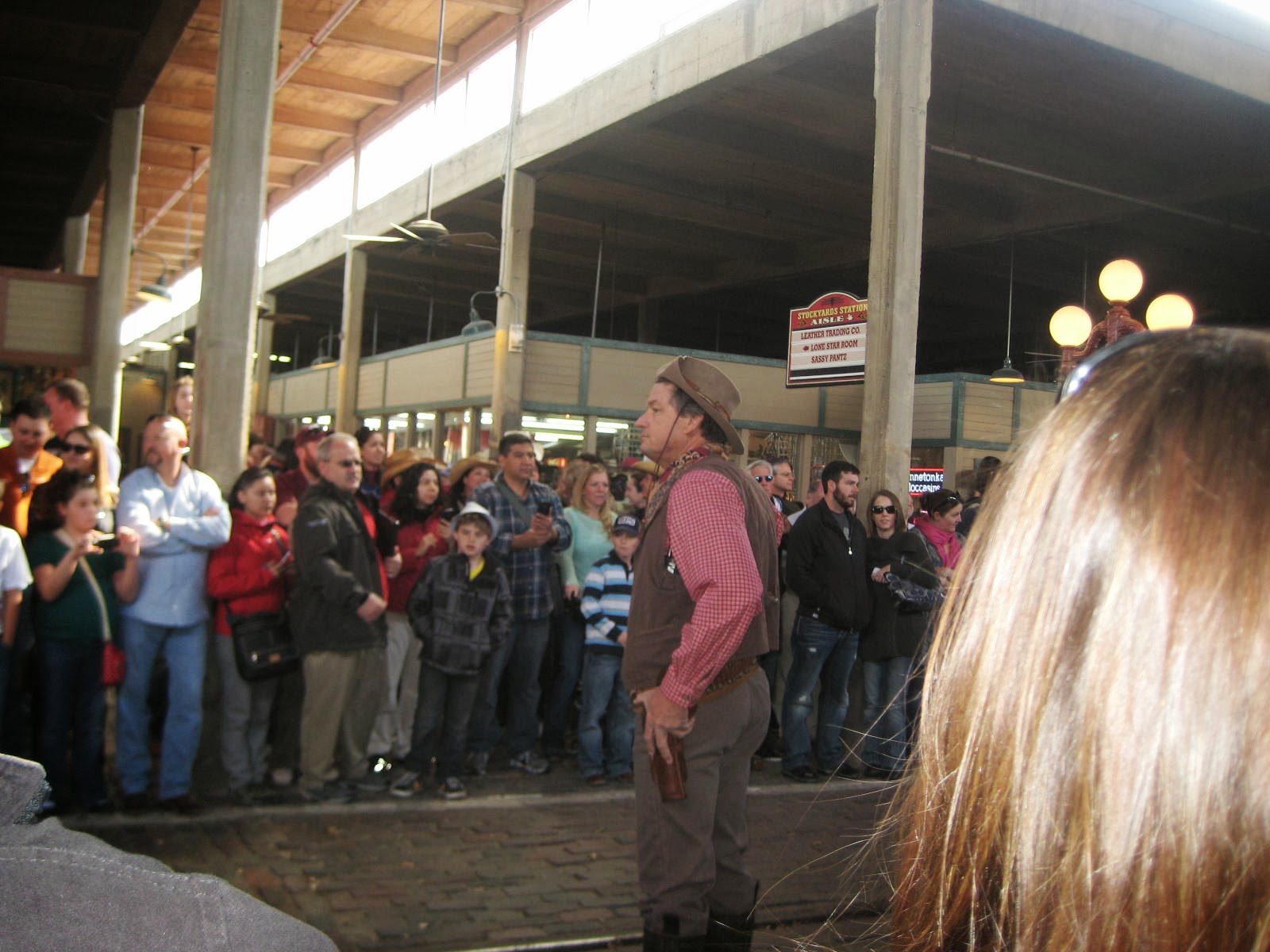 There are tons of shops and museums. Mama enjoyed looking around. They hold rodeos here on the weekend.   The folks are planning another trip soon because there is so much more to do there. 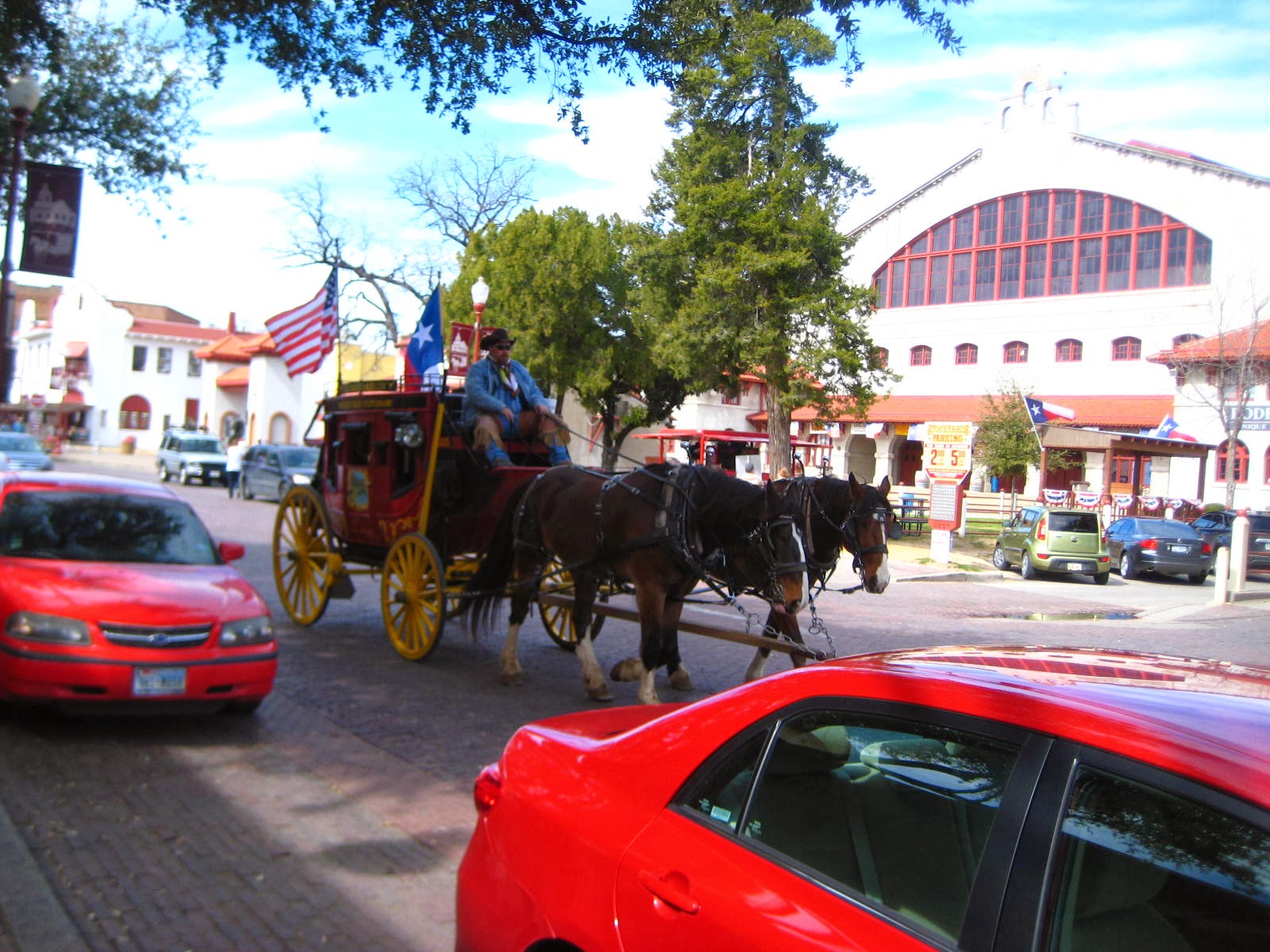 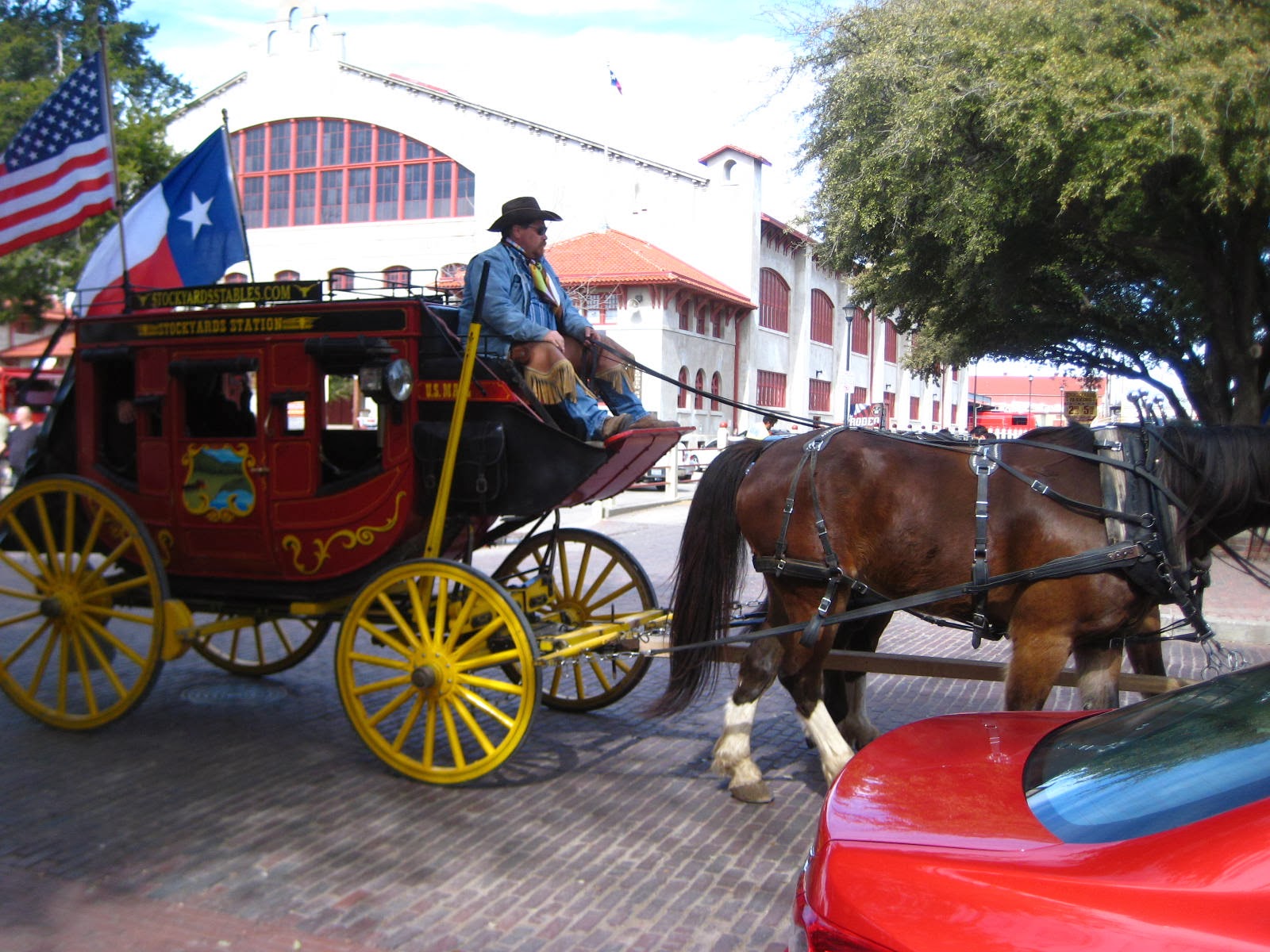 The folks also visited Billy Bob's which is the "World's Largest Honky-Tonk". We will tell you about that later in the week.

Joey,
The Greyhound Who Thinks Fort Worth Sounds Fun
at February 18, 2014 4 comments: