Fourth of July Was Not Fun

I am really late in posting this.  4th of July is the worst holiday ever!  I hate fireworks!  People were shooting off illegal fireworks on our beach and they were so loud.  Mom said next year we will not be at our condo.  She said we will go to a state park that is in a rural area and the fireworks will not be as scary for me.  Dad said the AC in the van is loud enough to block out the noise.  The illegal fireworks people left a mess on the beach.  Rude people! 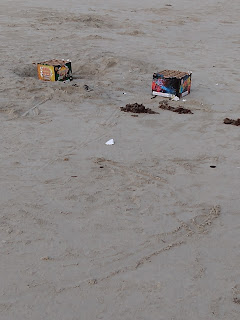 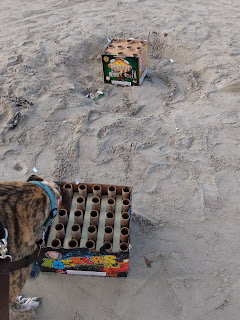 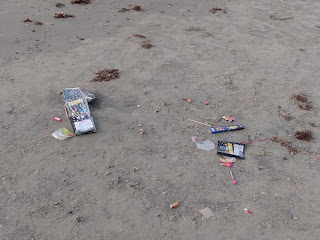 There was a dog on the beach the other day and he had a frisbee in his mouth.  He was really showing off.  Well, I found a frisbee buried in the sand and mine was a lot bigger.  I think I showed him whose frisbee was better. 😀 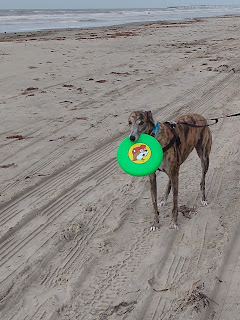 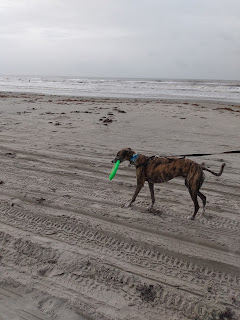 The Greyhound Who Hates Fireworks

I Met A Real Crab!

You never know what you will find on the beach.  I tried to be friends, but he was a little crabby. 😆 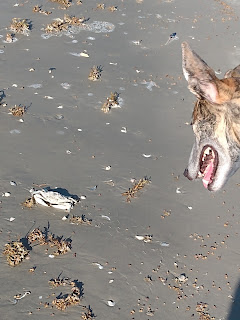 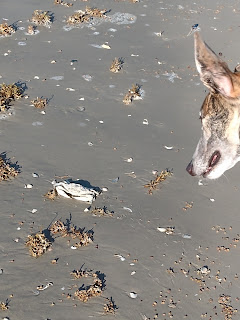 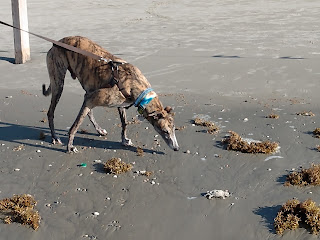 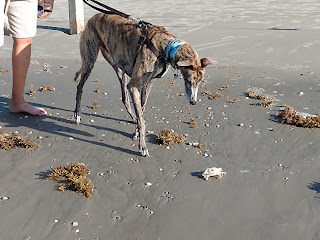 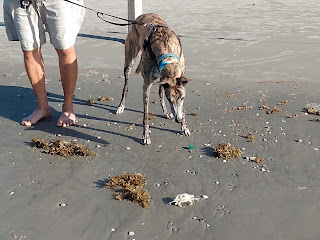 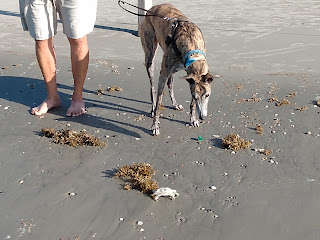 The Greyhound Who Thinks Crabs Are Interesting

Email ThisBlogThis!Share to TwitterShare to FacebookShare to Pinterest
Labels: beach, crabs, greyhounds, greyhounds at the beach

A Tour of Our Van

Mom realized that we didn't give you a tour of our van.  Dad bought our van back in September.  It is a cargo van.

That is basically the tour.  It is quite small especially when all three of us are in it at the same time. Most people have the beds pushed together and facing to the right instead of back to front.  Dad didn't want to have to crawl over Mom to get out of bed, so that is why he made it the way he did.  The carpet and paint are from our condo.  My bed is made from our old comforter.  It looks like home to me and I really like sleeping in it.  We have a butane stove that Mom can use inside.  We can grill outside, of course. Mom does find cooking in the van to be a real challenge, so she is concerned about the long trip we are planning for the fall.
We may eventually get a bigger van but Mom wanted something that we could park anywhere and we can definitely do that with this van.
Jaxson,
The Greyhound Who Likes Van Life
at July 02, 2021 1 comment:

We left Grandma's house around 8 a.m. on Friday morning.  It was a rainy morning.  We thought we were going to be able to avoid it, but the system kept moving down on us.  We were finally out of the rain when we reached Lebanon, MO.  We drove through the Ozark Mountains and through Arkanas again. The views are nice but the roads are very hilly and there are not any rest areas. It was a pretty uneventful day, but it was a long day.  We didn't reach our campground at Atlanta State Park in Atlanta, TX until 7 p.m.  Oh, one funny thing did happen.  We were just a few miles from our campground when Mom decided to follow Google's shortcut.  We ended up on some back roads that were almost too small for the van.  Mom thought it was funny.  Dad did not.

The Atlanta State Park is nice with a big lake. The campground loop we stayed in was very small and the sites were not very spacious.  We were really only there to sleep and the folks took showers.  Mom said every time she went into the bath house, there were more bugs. It was hot outside, but the van was nice and cool.

We left the park around 9 a.m.  The drive home was uneventful.  We made a few stops for gas and one for lunch.  We finally arrived home around 3:30 p.m. due to traffic slowdowns.

It is nice to be home, but we are all a little bored now.  We have a bigger trip planned in the fall.  We are attending two greyhound events and visiting several national parks on that trip.

The Greyhound Who Misses Grandma's House