This morning while Scout and I were outside, Mama saw something odd under our siding. 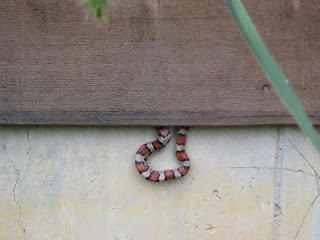 Snake!!!! Mama got all upset. She took the photo and emailed it to Daddy. Daddy was out of town. She said "What kind of snake is this?" No response from Daddy. She then emailed her best friend. She then decided to send it to the masses and put it on Facebook. She then called Daddy and said "Did you get the picture of the snake?" "It's under the siding, can it get in the house?" Now, last year when there was a black snake on the screened porch, she asked Daddy if it could get in the house and he said "if it wants to it can". Daddy took a lot of grief for that remark, so Mama didn't know if she should believe him when he said it would be very difficult because it would have to get through several layers. Mama saw this house being built with her own two eyes, so she knew all the layers, but she still felt uneasy. She described the snake to Daddy and told him she had seen it once in the zoo. Daddy laughed at her. Two friends were smart and looked up Missouri snakes on the Internet and found out it was a Red Milk Snake. Mama was trying to find it by describing it's colors and that was not bringing up the correct snake.

Here is the description that was found:
One of Missouri's most brilliantly colored snakes that is extremely rare to find. It is similar in pattern and color to the red milk snake, but instead has a red or orange color snout and a spotless, white belly. It is 14 to 20 inches (36-51 cm) long. This secretive snake spends much of its life underground, surfacing to feed mainly on eggs of other reptiles and occasionally rodents, lizards and small snakes. It is named for the red or crimson colored blotches along the back.


Mama felt better when she found out that it was not poisonous, but wondered why something extremely rare showing up in our yard had to be a snake. She checked on it several times. She even poked at it once to see if it was alive. 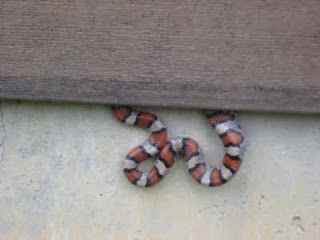 As soon as Daddy got home, Mama told him to come look at the snake. Daddy couldn't believe it had stayed there all day. Daddy got a storage bin and then took a long handle to try and get it to come out from under the siding. The snake decided to go further up the siding, so Daddy had to do a Steve Irwin move and he grabbed the tail of the snake and pulled it out.

They then put it in the car and Daddy sat in the backseat with it to be sure that it didn't escape. Mama was so scared that it was going to get out of the bin. She kept asking Daddy if he was paying attention to it. They came to the end of our road and released it. It slithered away happily.

Mama hates winter, but she will be glad when it's too cold for snakes.

Jack
The Greyhound Who Is Getting An Education In Snakes
at August 28, 2009 2 comments:

We are home from camping. We went to Montauk State Park which is a trout fishing park. The weather was beautiful. It was only in the 70's, which is abnormal for us this time of year.

Daddy, Grandpa and my skin cousin, Ryan, went trout fishing. They were gone almost the entire time. Here are a few of the fish that Daddy caught. Look away if fish scare you. 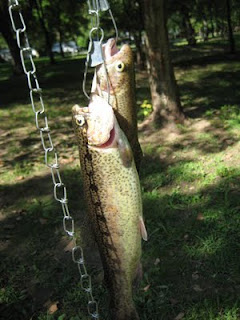 I had a great time spending time outside with Mama and Grandma. 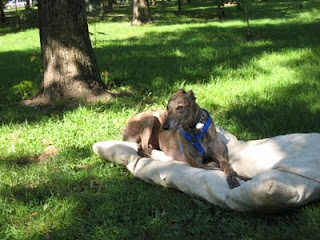 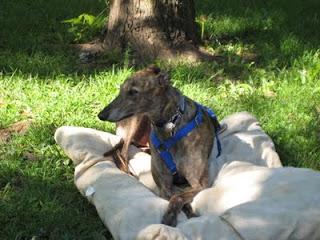 Scout on the other hand decided to spend most of the weekend inside. Yes, she is still being strange. She did take some walks, but she preferred to be inside. 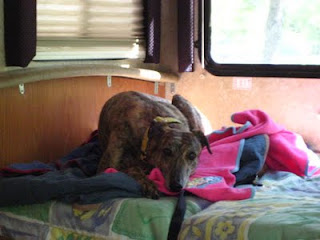 Mama says that Scout has developed a "Scout-a-tude". You know an attitude only Scout style. She says sometimes I have a Jack-a-tude. I'm not sure what she is referring to.

The main reason Mama wanted to camp this weekend was because there was a man there banding hummingbirds. I didn't get to see it, but she said it was interesting.

They also left us behind when they toured an old mill. Mama said there were bats that kept flying over her head and that scared her. Supposedly there are 400 bats that live there. Here's a picture of the mill. 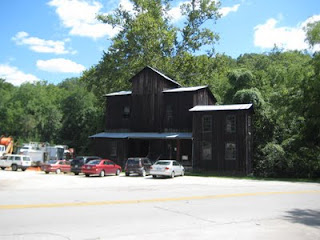 Thanks for visiting my blog!

I'm Being A Diva

Sorry it has been so long since I have updated you. I have had a rough time since I told you about my diet. Mama decided that I needed to learn to do steps. She has tried before, but I am stubborn. I guess the last time we camped she decided I must learn. Her back was really hurting her then and it was hard for her to lift my butt onto the steps. She decided to put a harness on me and teach me the steps at home. It was terrifying. We did one step at a time, but I dug my feet into the carpet and did all I could to stop her from sending me down those steps. She finally got me down and figured going up would be easier. I fooled her. I did all I could not to go back up. I almost made her fall down the steps because while she stood behind me, I pushed my butt into her with all my weight. We were both exhausted when we finally made it back up the steps. She said would do it again, but we haven't. Ha Ha! On a side note, I can do some steps, but not the RV steps or the steps going downstairs. I have come up them once on my own, but that was an accident.

The next really bad thing are the horseflies here. I am scared to go outside unless it is dark. I will not go on walks. Mama said "Fine, then I will take Jack by himself." I couldn't believe she subjected him to the dangers of the horseflies. I waited by the window and watched for them. I was so relieved to see Jack and when he came in the door, I kissed him all over his face. I gave him a thorough check and he was fine. Mama thought I would go the next time, but nope, I stayed in. Jack has been walking without me. Mama is making me go out a few times a day, but I am not making it easy on her.

Yesterday, our Internet was down. Mama spent 3 hours on the phone with tech support. No one believed her that there was an outage even when she told them she took her laptop to town and it worked fine there, but not in our house. Today, it magically started working again. We are happy about that because Mama is happy.

I guess the highlight of the week was today. Mama took Jack and I for a ride. We visited the library, the bank and Burger King! Yes, I cheated on my diet with a small hamburger. I probably shouldn't say that. We had so much fun feeling the wind in our faces while we were riding.

Jack says "Hi" to everyone. He is snoozing after our trip to town.

It's me Scout. I went to the vet on Saturday for my annual shots. He said I looked good and my teeth look great! Mama saw my weight and said I had to loose ten pounds. I weigh five more pounds than Jack now and I am huge for a girl. I'm embarrassed to say how much I weigh. :::sigh:::

Daddy says I must cut back on camping food. That means I have to reduce my hot dog, ham, bologna and cheese intake. :::sigh::: Daddy said he thinks my Frosty Treats are okay because Mama uses low fat yogurt, but told Mama to check into it to be sure. He also said no more table food. :-P

I've been really cranky the last few days. I'm starving! Mama said she will buy me some green beans because they are okay and I like them after I spit out the first few. She said they will be a good snack for me.

It's not fair that my metabolism is not as good as Jack's. I hate being a woman!

We are home from a four day camping weekend. We stayed at Sam A. Baker State Park. It's a really nice place and almost feels like a resort with all the amenities.

Mama's back was hurting her a lot, so we mainly sat around the campsite. It was very relaxing though. I had my camping bed along with my Disney's Baby comforter that my foster mom gave me when I left her house and we put both of those outside so that we could spread out. I love my Disney comforter. It always travels with us. Scout and I basically just relaxed outside and took long walks with the folks and Grandma and Grandpa. We went to the river one day. I do not like water. Scout, however, likes to lay down in it. She stayed out for about 20 minutes. I sat on my comforter where it was dry.

We ate lots of good food and, of course, Frosty Treats came with us.

Mama didn't take any photos. She said that we basically look the same at every campsite. I don't know how she can say that. We flip over from time to time.

We were sad to come home yesterday.

Jack
The Greyhound Who Loves To Camp
at August 04, 2009 No comments: